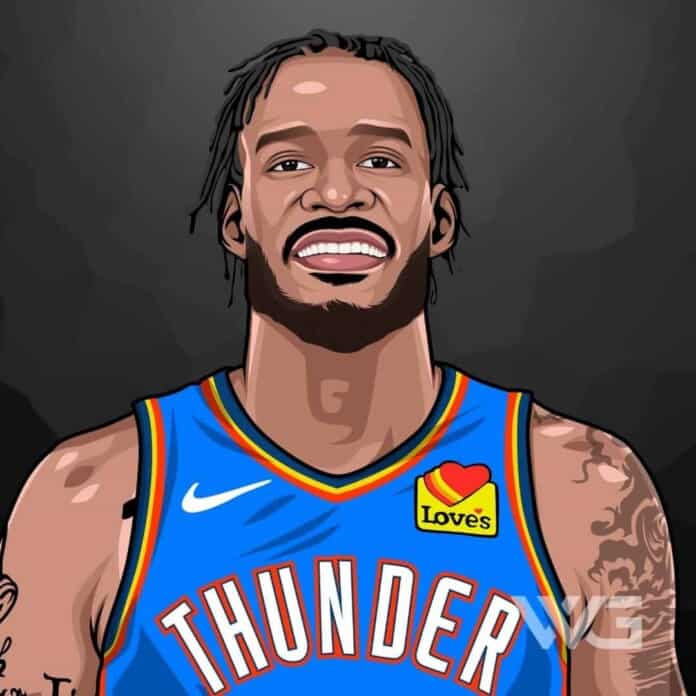 What is Trevor Ariza’s net worth?

Trevor Ariza is an American professional basketball player for the Miami Heat of the NBA.

Throughout his career, he has won an NBA championship with the Los Angeles Lakers in 2009.

Ariza attended Westchester High School in Los Angeles. He combined to lead the Comets to the California State Championship alongside Hassan Adams, Brandon Heath, and Bobby Brown. He was listed as the number five power forward.

As a freshman at UCLA in 2003 and 2004, he played 25 games and averaged 11.6 points, 6.5 rebounds, and a team-high 1.7 steals. He subsequently earned All-Pac 10 Freshman Team honors. He declared for the NBA Draft following his freshman campaign at UCLA.

In 2004, Ariza was selected by the New York Knicks in the second round. Ariza played in 80 games during his rookie campaign with New York and averaged 5.9 points, 3.0 rebounds, and 1.1 assists per game.

In 2007, Ariza was traded to the Los Angeles Lakers in exchange for Brian Cook and Maurice Evans. He fractured a bone in his right foot in January 2008.

In the playoffs, Ariza scored a playoff career-high with 21 points in Game 1 of the first round against Utah Jazz. In the Western Conference Finals against the Denver Nuggets, Ariza stole an inbound pass from Chauncey Billups in Game 1.

A few years later, Ariza reached an agreement with the Houston Rockets worth $33 million over five years. He was then signed using the Disabled Player Exception the Rockets were granted for injured center Yao Ming.

The same year, against the Portland Trail Blazers, Ariza scored a career-high 33 points in a 111 – 107 Rockets win. On December 13, 2009, Ariza was ejected after he attempted to punch DeMar DeRozan of the Toronto Raptors after having the ball stolen by him.

How Does Trevor Ariza Spend His Money?

Here are some of the best highlights of Trevor Ariza’s career:

“I was just excited that they even knew who I was. Growing up in LA, Pat Riley won championships with the Lakers, so you know that if he knows anything about you, he feels like you have some sort of winning pedigree. So, at 18, just for him to just even know who I was was a really motivating feeling.” – Trevor Ariza

“The thing that I could remember is how great he wanted everything to be as far as like even going into preparation to going into offseason training, how hard this organization worked to be first class and to be winners, and that was something that I just fell in love with. And I wanted to be here then.” – Trevor Ariza

“I think that Bam is somebody that wants to learn anyway that he can, so like any bit of information that anybody has to offer him that’s going to better him, better his team, he’s willing to hear and incorporate into his play and into what he’s doing.” – Trevor Ariza

“It’s been great, and it’s been challenging. It’s been frustrating, it’s been beautiful, it’s been everything that you can imagine a transition would be. The part about it that makes it so beautiful is that it’s a part of the journey. It’s a part of the process. And nothing that’s worth having has been extremely easy.” – Trevor Ariza

Now that you know all about Trevor Ariza’s net worth and how he achieved success; let’s take a look at some of the lessons we can learn from him:

Smile and let everyone know that today, you’re a lot stronger than you were yesterday.

When start seeing your worth, you’ll find it harder to stay around people who don’t.

Once you start to see results, it becomes an addiction.

How much is Trevor Ariza worth?

Trevor Ariza’s net worth is estimated to be $20 Million.

How old is Trevor Ariza?

How tall is Trevor Ariza?

Trevor Ariza is an American professional basketball player. Ariza was born in Miami, Florida. He currently plays as a swingman for the Houston Rockets of the NBA.

After playing one season at UCLA, he was selected 43rd overall by the New York Knicks in the 2004 NBA Draft. A few years later, he was traded to the Los Angeles Lakers.

In 2009, Ariza landed a five-year contract with Houston Rockets.

What do you think about Trevor Ariza’s net worth? Leave a comment below.