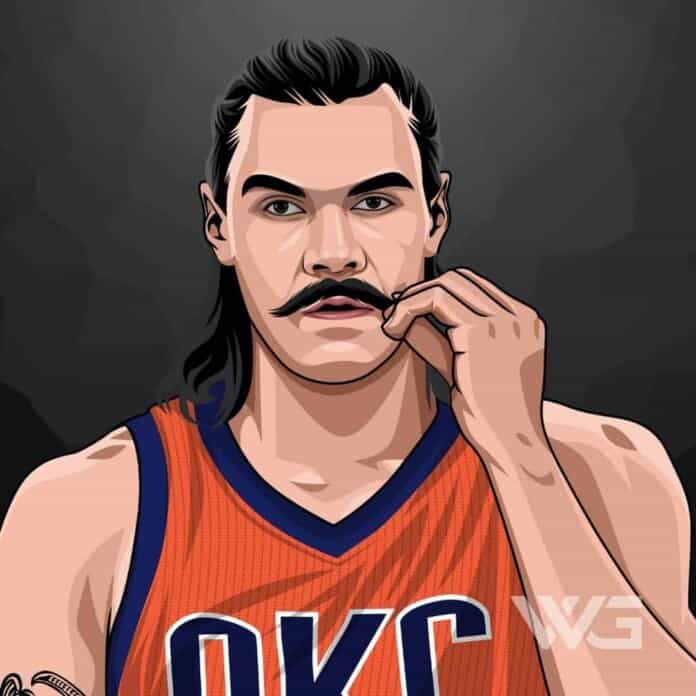 What is Steven Adams’ net worth?

Adams plays for the Oklahoma City Thunder of the NBA. After playing one season with his hometown team Wellington Saints, in 2011, Adams moved to the United States in 2012 to play college basketball for Pitt.

He was selected by the Thunder with the 12th overall pick in the 2013 NBA draft.

As of February 2023, Steven Adams’ net worth is estimated to be roughly $20 Million.

Steven Funaki Adams was born on the 20th of July, 1993, in New Zealand. Adams is the youngest of Sid’s 18 children with five different women.

After the death of his father, his brother rescued him from the streets and brought him to Wellington. He began to take responsibility for Adams and introduced him to Wellington basketball legend Kenny McFadden.

In 2011, Adams signed with the Wellington Saints for the 2011 New Zealand NBL season.

He went on to garner Rookie of the Year honors and helped Wellington win the NBL championship. Adams was selected with the 12th overall pick in the 2013 NBA draft by the Oklahoma City Thunder.

In 2013, Adams signed his rookie scale contract with the Thunder. That same day, he helped the Thunder become the first-ever champions of the Orlando Summer League with an 85–77 win over the Houston Rockets.

On 23 October 2015, the Thunder exercised their fourth-year team option on Adams’ rookie scale contract, extending the contract through the 2016–17 season.

How Does Steven Adams Spend His Money?

Steven Adams spends some of his money on charity work.

Adams gave in pre-Christmas charity shop-up for kids. He is a humanitarian, and he loves to help people.

Here are some of the best highlights of Steven Adams career:

“I seem to get a general reaction at just, like, ‘Oh! A mustache!’ but most people are fine with it. But I don’t actually do it for the ladies. It’s more a guy thing, an appreciation. All the dudes want to do it, but they don’t have the balls to do it, so they give me the nod.” – Steven Adams

“Probably the biggest thing is the private planes. Wow, that thing’s amazing. Got all the food on there, a bunch of drinks. I don’t know. It’s just amazing, never seen anything like it. Tables, tables on planes, that’s amazing. That was probably the biggest ‘whoa’ for me, like, ‘I made it. This big private jet, you’re like, ‘Whoa.” – Steven Adams

“I’ll try anything, but the pig testicles in Taiwan were a little much. Eh, it wasn’t half bad. There was this one dish I had there. The translation is, ‘The Monk Jumps over the Fence.’ It’s a fish dish with all these spices. It was beautiful, man – it was poetry. It had a whole story.” – Steven Adams

“I hope that basketball gains momentum and kids understand that you can actually make a living from it. Not just the N.B.A. You can get a scholarship, a free degree – like, no student loan you have to pay off. That’s huge in life. Once they realize that in New Zealand, I hope they get inspired.” – Steven Adams

Now that you know all about Steven Adams net worth and how he achieved success; let’s take a look at some of the lessons we can learn from him:

Motivation is a fire from within. If someone else tries to light that fire under you, chances are it will burn very briefly.

You don’t have to see the whole staircase. Just take the first step.

Happiness is the real sense of fulfillment that comes from hard work.

How much is Steven Adams worth?

Steven Adams’ net worth is estimated to be $20 Million.

How old is Steven Adams?

How tall is Steven Adams?

Steven Adams is a New Zealand-born professional basketball player drafted #12 by the Oklahoma City Thunder in the 2013 NBA Draft and has played for the Thunder since 2013.

Between June 2017 and June 2018, Steven Adams made $24 million between salary and endorsements. That was enough to make him one of the 100 highest-paid athletes on the planet.

As of February 2023, Steven Adams’ net worth is estimated to be roughly $20 Million.

What do you think about Steven Adams’ net worth? Leave a comment below.