Madonna is an American singer, songwriter and actress. She achieved popularity by pushing the boundaries of lyrical content in mainstream popular music and imagery in her music videos, which became a fixture on MTV.

Last year, Madonna was named as Woman of the Year, and her speech after being given the award is featured towards the bottom of this article.

2. “Ever since my daughter was born I feel the fleetingness of time. And I don’t want to waste it on getting the perfect lip color.” – Madonna

3. “I am because we are. We all bleed the same color. We all want to love and be loved.” – Madonna

4. “I laugh at myself. I don’t take myself completely seriously. I think that’s another quality that people have to hold on to… you have to laugh, especially at yourself.” – Madonna

5. “I think the ultimate challenge is to have some kind of style and grace, even though you haven’t got money, or standing in society, or formal education. I had a very middle, lower-middle class sort of upbringing, but I identify with people who’ve had, at some point in their lives to struggle to survive. It adds another color to your character.” – Madonna

6. “I wouldn’t have turned out the way I was if I didn’t have all those old-fashioned values to rebel against.” – Madonna

7. “I’m not interested in being Wonder Woman in the delivery room. Give me drugs.” – Madonna 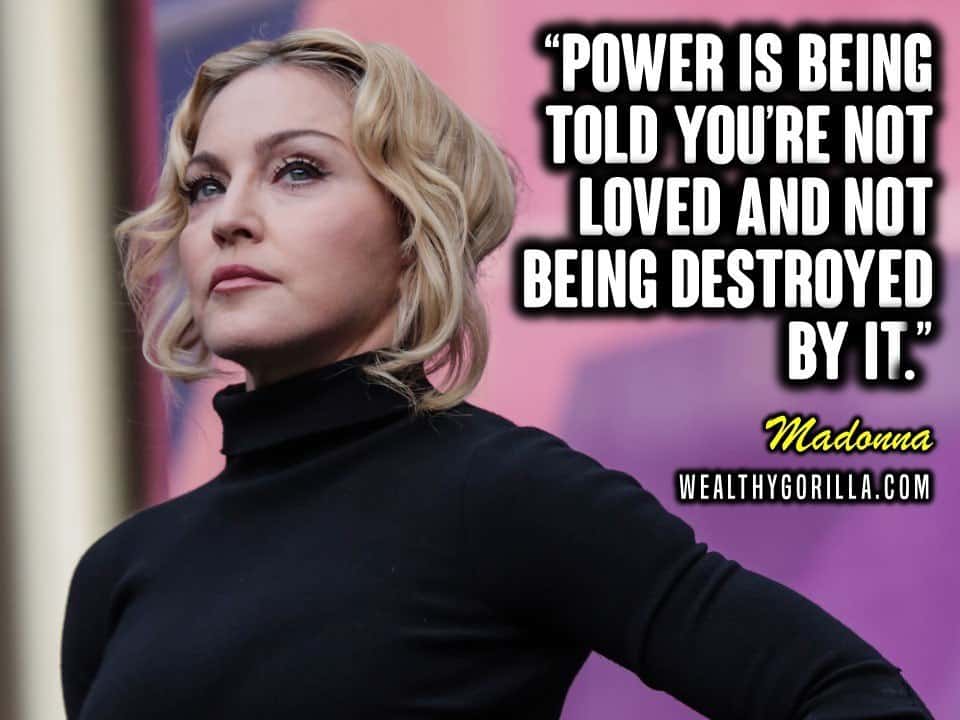 10. “Power is being told you’re not loved and not being destroyed by it.” – Madonna

11. “There’s no such thing as the perfect soul mate. If you meet someone and you think they’re perfect, you better run as fast as you can in the other direction. ‘Cos your soulmate is the person that pushes all your buttons, pisses you off on a regular basis, and makes you face your s***.” – Madonna

15. “I must have been Japanese in a previous life. I’m pretty sure I was a warrioress. I can’t explain it, I just know. I’m good at fighting – fighting with a big sword.” – Madonna

16. “I think you can be defiant and rebellious and still be strong and positive.” – Madonna

17. “I’d like to think I am taking people on a journey; I am not just entertaining people, but giving them something to think about when they leave.” – Madonna
18. “I’m tough, I’m ambitious, and I know exactly what I want. If that makes me a bitch, okay.” – Madonna

19. “Listen, everyone is entitled to my opinion.” – Madonna

20. “No matter who you are, no matter what you did, no matter where you’ve come from, you can always change, become a better version of yourself.” – Madonna

21. “Sometimes I look back at myself and remember things I used to say, or my hairstyle, and I cringe.” – Madonna

22. “Things were a lot simpler in Detroit. I didn’t care about anything but boyfriends.” – Madonna

23. “Catholicism is not a soothing religion. It’s a painful religion. We’re all gluttons for punishment.” – Madonna

24. “Everyone probably thinks that I’m a raving nymphomaniac, that I have an insatiable sexual appetite, when the truth is I’d rather read a book.” – Madonna

25. “I am rich and famous. I have a talented and gorgeous husband and two beautiful children. I could go on.” – Madonna

26. “I sometimes think I was born to live up to my name. How could I be anything else but what I am having been named Madonna? I would either have ended up a nun or this.” – Madonna

27. “I want to be like Gandhi and Martin Luther King and John Lennon but I want to Stay Alive.” – Madonna

28. “I’d love to be a memorable figure in the history of entertainment in some sexual, comic, tragic way. I’d like to leave the impression that Marilyn Monroe did, to be able to arouse so many different feelings in people.” – Madonna 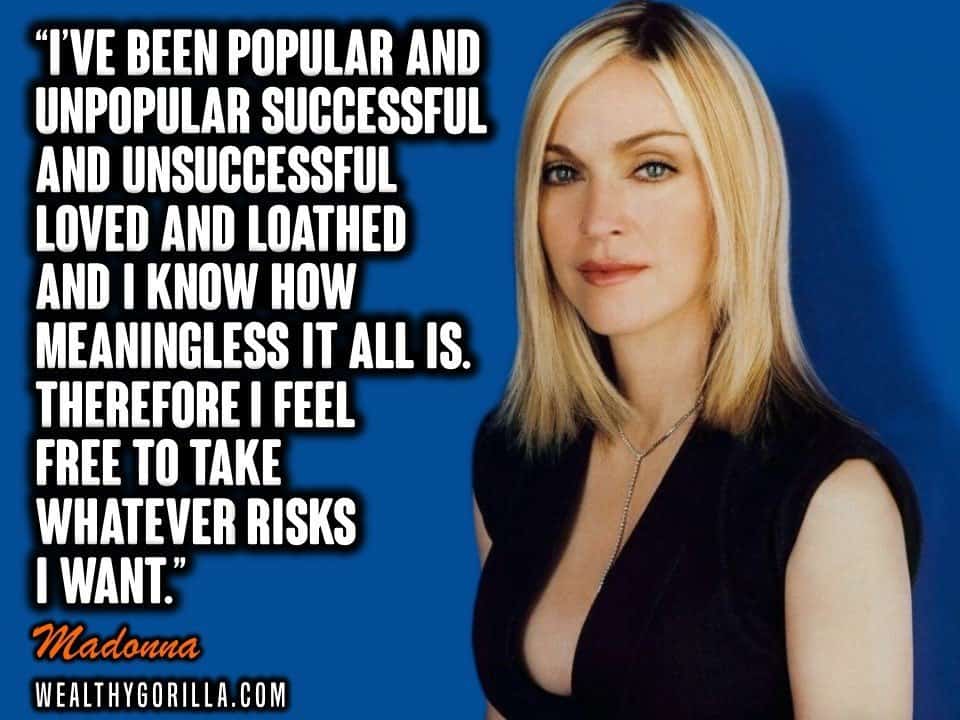 29. “I’ve been popular and unpopular successful and unsuccessful loved and loathed and I know how meaningless it all is. Therefore I feel free to take whatever risks I want.” – Madonna

32. “The last thing I want is to raise a brat. We could definitely go down the wrong road. I don’t want Lola to have everything she wants. I want her to appreciate things, and not to be presumptuous. I want her to have manners and social graces.” – Madonna

33. “To be brave is to love someone unconditionally, without expecting anything in return. To just give. That takes courage, because we don’t want to fall on our faces or leave ourselves open to hurt.” – Madonna

34. “Children always understand. They have open minds. They have built-in shit detectors.” – Madonna

35. “Fame is a by-product. Fame is something that should happen because you do work that speaks to people and people want to know about your work. Unfortunately the personality of people has taken over from the work and the artistry and it’s this thing now that stands on its own. I don’t think one should ever aspire to being famous.” – Madonna

37. “I stand for freedom of expression, doing what you believe in, and going after your dreams.” – Madonna

40. “I’ve never really lived a conventional life, so I think it’s quite foolish for me or anyone else to start thinking that I am going to start making conventional choices.” – Madonna

41. “My having a child is not for public consumption. It’s not a career move. It’s not a performance to be judged or rated. Nor is my role as a mother.” – Madonna

42. “People think they will wake up one day and I’ll be gone. But I’m never going away.” – Madonna

43. “The worst thing about being famous? I think it’s what everybody says…the lack of privacy and the idea that you’re not really allowed to make mistakes and everything that you do is viewed under a microscope.” – Madonna

44. “To me, the whole process of being a brush stroke in someone else’s painting is a little difficult” – Madonna

45. “Deep in my heart I’m concealing things that I’m longing to say. Scared to confess what I’m feeling – frightened you’ll slip away.” – Madonna 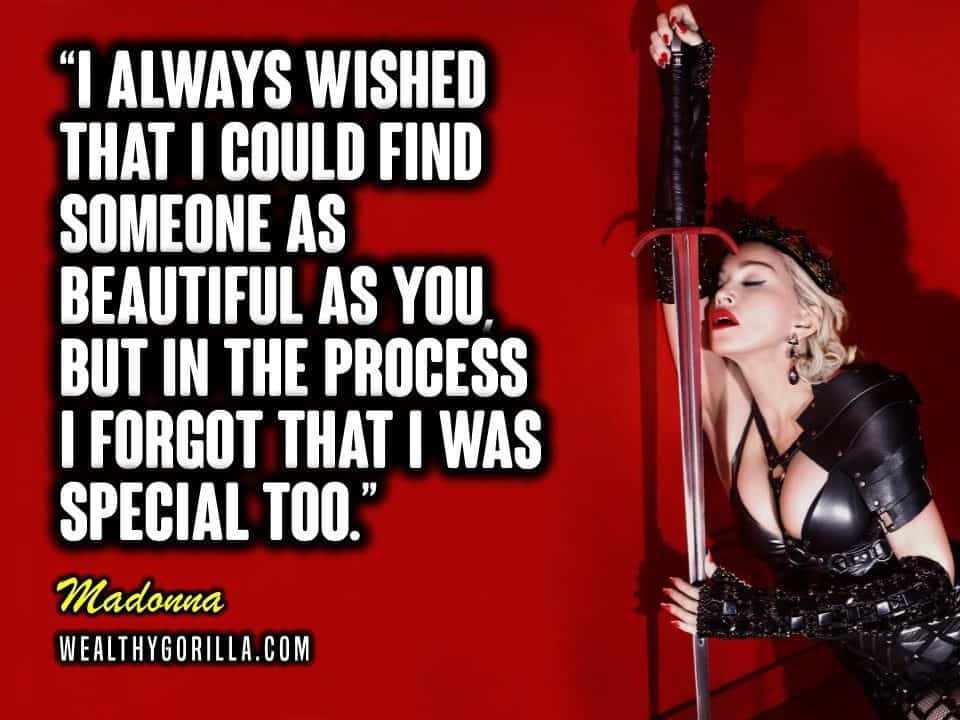 46. “I always wished that I could find someone as beautiful as you, but in the process I forgot that I was special too.” – Madonna

48. “I think my biggest flaw is my insecurity. I’m terribly insecure. I’m plagued with insecurities 24/7.” – Madonna

50. “I’m not going to compromise my artistic integrity.” – Madonna

53. “Poor is the man whose pleasures depend on the permission of another.” – Madonna

54. “There are moments when I can’t believe I’m as old as I am. But I feel better physically than I did 10 years ago. I don’t think, Oh God, I’m missing something.” – Madonna

Thanks for viewing this collection of Madonna quotes! Don’t forget to share them with your friends on social media.

Which are your favorite Madonna quotes? Leave a comment below.