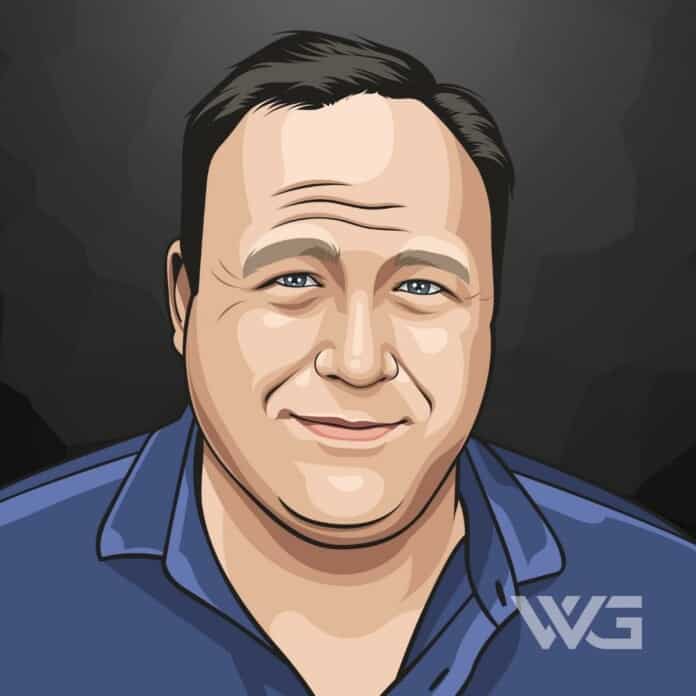 What is Alex Jones’ net worth?

Alexander Emric Jones, “Alex Jones”, is an American conspiracy theorist and radio host from Dallas. He initially gained recognition when he began his career as a radio host in ‘The Final Edition’.

He released his first film in 1998 entitled ‘America Destroyed By Design’.

He is best known for his talk show ‘The Alex Jones Show’ and his syndicated news websites.

Alex Jones was born in Dallas, Texas on the 11th of February, 1974. He grew up in a Dallas suburb of Rockwall in Austin Texas with his parents.

Jones is of German, Irish and English descent. He was the lineman on his high school football team and he graduated from Anderson High School in 1993.

When he was a teenager he mostly spent his time reading conservative journalism and conspiracy theories. After high school, Jones attended Austin Community College but dropped out after a short time.

Jones started his career in Austin with a television program. In 1996 he switched format to a radio, hosting a show ‘The Final Edition’. Ron Paul was running for Congress and was a guest on his show several times.

Jones talked about his belief that the United States was behind the 1995 Oklahoma City bombing. In 1998 Jones released his debut film, ‘America Destroyed By Design’.

In 1999 Jones tied with Shannon Burke for that year’s “Best Austin Talk Show Host”, voted by The Austin Chronicle readers.

The following year Jones began broadcasting from his home. Jones was one of the seven Republican candidates for the state representative in Texas in 2000. One year later his show was syndicated on approximately 100 stations.

After the 9/11 attack, Jones started to speak of a conspiracy by the Bush administration as being behind the 9/11 attack. It caused a number of the stations that had carried Jones to drop his program.

In June 2013 Jones addressed international media for the annual Bilderberg conference in England. He gave a long speech to around 2000 protesters in the ground of the Grove Hotel.

Since then, Jones has been demonstrating across the whole US about his thoughts and opinions about different situations in America.

His website, InfoWars has been described as a fake news website and has been accused of spreading conspiracy theories. After InfoWars was banned from Facebook for violations of its policies, Jones used another site, NewsWars, to get around the ban.

How much is Alex Jones worth?

Here are some of the best highlights of Alex Jones’ career:

“If humanity has any hope of effecting real change for the better, it will not come from the Madison Avenue false reality makers who’ve cast Barack Obama as the savior of the world. To alter our course from tyranny to liberty, to defeat the corrupt elite, we must get past the puppets and confront the real power structure of the planet.” – Alex Jones

“ Twenty years ago, it would not be expected that the New York Times would explain itself. The concept of what accountability.” – Alex Jones

“People say, ‘The government couldn’t carry out the September 11th attack, it’s too big, they’d get caught!’ They DID get caught! They’re just counting on you to be dumb and to go along with it.” – Alex Jones

“Within 2 years I’m predicting…that you’re going to see a suitcase nuke in this country. You’re probably going to see a release in a few years of something communicable. & I am predicting that you will see a lot of conventional bombings…in the next year or so.” – Alex Jones

“The globalists, the Democrats, the collectivists, hate anybody who’s conservative, anybody that believes in the individual. And, the fact is, those people promote individualism, nationalism, and that’s why they’ve got to be eradicated. What a horrible world if the system is successful.” – Alex Jones

View our larger collection of the best Alex Jones quotes!

How much is Alex Jones worth?

Alex Jones’ net worth is estimated to be $2.5 Million.

How old is Alex Jones?

How tall is Alex Jones?

We mostly know Alex Jones from his syndicated news/talk show ‘The Alex Jones Talk Show’. Jones had collaborated with many and his conspiracy theories have been famous all over the U.S.

As of December 2022, Alex Jones’ net worth is approximately estimated to be roughly $2.5 Million.

What do you think about Alex Jones’ net worth? Leave a comment below.