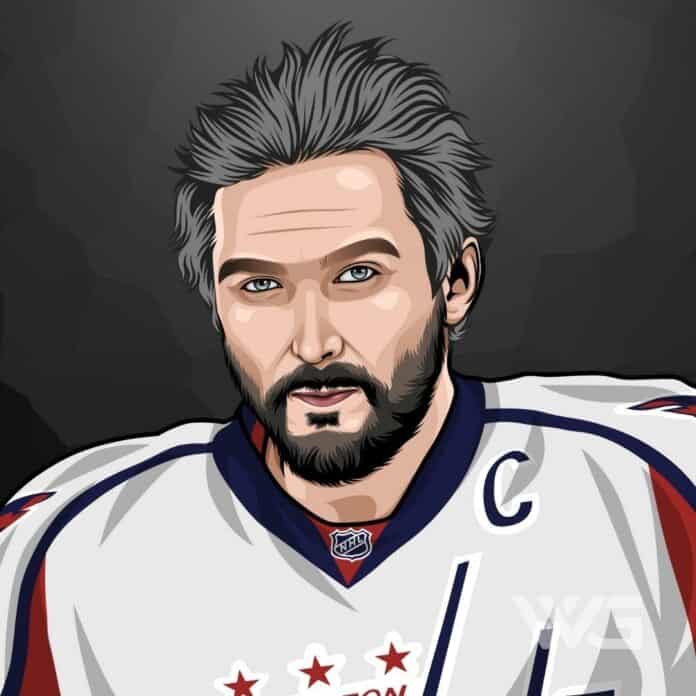 What is Alexander Ovechkin’s net worth?

Alexander Ovechkin is also known by his nicknames “Ovi”, and “the Great Eight”. He is described as one of the greatest goal-scorers in hockey history.

After starting his career with his hometown team, Dynamo Moscow, he worked his way up to captain the Washington Capitals in the NHL.

With his strong will to win and because of his determination, Alexander became one of the best players in the world.

As of November 2022, Alexander Ovechkin’s net worth is estimated to be $80 Million.

His family was highly athletic and successful, with his mother Tatyana being an Olympic gold medallist basketball player. His father, Mikhail, is also a high-level professional football player.

Alexander’s brother, Mikhail Jr., didn’t reach quite the same height of fame but also took an interest in sports, working for the WNBA’s Washington Mystics.

His older brother, Sergei, passed away in a car accident when Alexander was 10 years old. It was during this time, with Alexander battling over his brother’s death, that he broke a goalpost in half during a match.

He grew up in post-communist Russia and lost many friends to drugs and street life. To divert his attention from his tragic life, he used hockey to escape. He attended public school #596 but dropped out to join the Dynamo Moscow sports school.

Alexander created a name for himself at Dynamo Moscow and dreamed of eventually being a part of the NHL.

Alexander made his debut in the Russian Super League while playing for the Dynamo Moscow team at the age of 16. After playing for three seasons in Russia, he was finally drafted by the NHL.

He was one of the first selected and was so well known at the time that he also received an offer from the Florida Panthers, but Alexander decided to follow his dream and stayed with the NHL.

Before leaving to play in the NHL, Alexander stayed with the Dynamo Moscow team for an extra season during 2004 and 2005. Despite injuring his shoulder, he went on to help his team win the RSL title.

To maintain his eligibility for the NHL, he decided to sign with the Capitals. In 2005, within only two days of signing his contract, Alexander had already helped lead his team to victory.

After multiple successful seasons, he re-signed the most expensive contract in NHL history in 2008 with the Capitals.

At the end of the season, he returned to Russia to aid his sickly grandfather, but returned to the NHL in 2009 to score his 200th goal.

Unfortunately, Alexander suffered from an upper-body injury which ultimately set him back as he had already suffered a serious shoulder injury in the past.

On returning from recovery, he was suspended due to a head-on with Tim Gleason. He returned in 2010 and was named the captain of the Capitals, becoming the “Face of the Capitals”, and continues to lead his team to victory to this day.

Alexander joins the likes of Wayne Gretzky, Sidney Crosby, Doug Weight, and Pavel Bure as one of the richest hockey players in the world and one of the most well-respected.

With his natural talent, incredible speed and strength, and ability to withstand huge amounts of pressure, Alexander has managed to increase his earnings astronomically.

He is one of the highest-paid Russian-born hockey players in the league and, based on his performances, the money is well-spent.

Alexander continues to dominate the ice and we’re sure that he will continue to earn an impressive salary due to his prodigious skills.

Coming from a country where life was exceedingly hard, Alexander made sure to invest his money and not waste it.

This has resulted in him amassing a huge fortune with his money spread across real estate investments and expensive cars.

Here’s a breakdown of Alexander Ovechkin’s annual net worth:

With a string of successful seasons behind him, Alexander is riding a wave of success that has seen his wealth increase tremendously over the years.

With his money tied up in high-value real estate and various entrepreneurial endeavors, he’s likely to increase his net worth substantially in the future.

Alexander used to be married to Maria Kirilenko, a well-known tennis player. They were engaged but called the wedding off in 2014.

The following year, Alexander announced that he would be marrying Natstya Shubskaya. The couple has two sons, Ilya and Sergei (named after Alexander’s late older brother).

Alexander was an exceptionally driven youngster, earning his place in the team through sheer determination.

He’s carried this drive to compete in the professional arena, which has resulted in an impressive career record.

Here are some of the more memorable moments from Alexander Ovechkin’s career:

He has been awarded the Hart Memorial Trophy three times; in 2008, 2009, and 2013, but despite his success, he remains down-to-earth and approachable.

How Does Alexander Ovechkin Spend His Money?

Alexander has an impressive car collection and during an NHL All-Star Game, he auctioned off his Honda Accord for charity.

He loves to drive the most expensive cars in the world, with his car collection including luxury vehicles such as the Mercedes-Benz G65 AMG, Mercedes-Benz SL65 AMG Black Series, BMW M6, Porsche Cayenne GTS, and a Mercedes-Benz S-Class V12S Brabus.

He has also invested a large amount of money in real estate, including his $4.2 million purchase of a 5-bedroom house located in Virginia.

Alexander is a big philanthropist and takes pride in helping improve his hometown. He is known for his work with several orphanages in Russia, where he interacts with the kids and isn’t shy about donating huge amounts for their care.

From his very first season in the NHL, Alexander has been the catalyst for his team’s victories.

Not satisfied with just performing on the ice, Alexander has widened his goals to include starting his clothing brand as well.

Here are some of the best highlights of Alexander Ovechkin’s career:

Alexander launched his very own streetwear line in 2008 which included his distinctive ‘Number 8″ design, an iconic number for his fans. It is obvious that, despite still being so young, Alexander was focussed on making a name for himself both on the ice and off.

Alexander is focused on what needs to be done immediately, with the future looking after itself.

While he learns from his past, he doesn’t dwell on it, but rather uses it to motivate himself to do better in the future.

Here are our favorite quotes from Alexander Ovechkin:

More than anything else, Alexander is loyal to his team, which goes a long way to explain his popularity as captain.

He also believes that you have to fight hard and take charge of your life, as there is no one else who will do it for you.

1. Stay Loyal To Your Dream

Alexander was given the chance to join another team but decided to follow his dream and stay with the team he had been working to play for during his early years.

2. Sometimes You Must Fight For What You Believe In

He believes that in hockey you sometimes must fight your way to the top. There will always be people trying to undermine you, but if you fight for your dream and do not let them get to you, nothing will stand in your way.

3. Always Put In Your All

Ovechkin lives every day as if it was his last and puts everything he’s got into the sport he loves. He does this with his other interests too so that he can achieve his goals and craft the life he desires.

He is known by his teammates as “Alexander the Great”, which he finds an acceptable name, as he is one of the greatest players in the history of the sport.

Alexander is negotiating with the Washington Capitals, and we will see enormous growth in his income and wealth if he chooses to stay with the team.

Ovechkin has amassed huge wealth by being the best player he can be, securing contracts as one of the highest-paid hockey players of all time.

As of November 2022, Alexander Ovechkin’s net worth is estimated to be $80 Million.

What do you think about Alexander Ovechkin’s net worth? Leave a comment below.