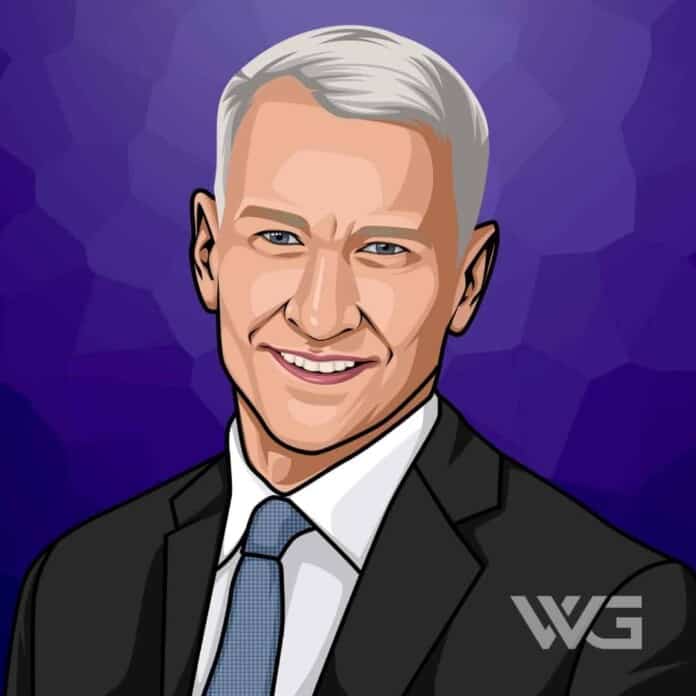 What is Anderson Cooper’s net worth?

As of December 2022, Anderson Cooper’s net worth is estimated to be $50 Million.

The program is usually broadcast live from a New York City studio; however, Cooper often broadcasts live from CNN’s studios in Washington, D.C.

Anderson Hays Cooper was born on the 3rd of June, 1967, in Manhattan, New York City. Cooper is the younger son of the writer Wyatt Emory Cooper and the artist, fashion designer, writer, and heiress Gloria Vanderbilt.

Cooper is also a descendant, through his mother, of Civil War brevet Major General Hugh Judson Kilpatrick, who was with General William T. Sherman on his march through Georgia.

After Cooper graduated from Yale, he tried to gain entry-level employment with ABC answering telephones but was unsuccessful. Finding it hard to get his foot in the door of on-air reporting, Cooper decided to enlist the help of a friend in making a fake press pass.

In 1995, Cooper became a correspondent for ABC News, eventually rising to the position of co-anchor on its overnight World News Now program on September 21, 1999.

A freelance writer, Cooper has authored a variety of articles that have appeared in many other outlets, including Details magazine. He published a memoir for HarperCollins in 2006, Dispatches from the Edge, detailing his life and work in Sri Lanka, Africa, Iraq and Louisiana over the previous year.

In October 2007, Cooper began hosting the documentary ‘Planet in Peril’, with Sanjay Gupta and Jeff Corwin on CNN.

The following year, Cooper, Gupta, and Lisa Ling from National Geographic Explorer teamed up for a sequel, ‘Planet in Peril: Battle Lines’, which premiered in 2008.

Here are some of the best highlights of Anderson Cooper’s career:

“Thoughts come and go. It’s impossible to stop your thoughts, but the idea is that the thoughts are kind of like waves on the ocean. That’s Jon Kabat-Zinn’s big analogy and that this is actually kind of diving under the waves. And you know it’s kind of interesting.” – Anderson Cooper

“I don’t like anything that scares me, and I prefer to face it head-on and get over it. Anyone who says they’re not scared is a fool, a liar or both. I just don’t want that fear in my stomach to be part of my life, so I work to eliminate it.” – Anderson Cooper

“If you’ve ever swum in the ocean, and you go underneath the waves, you know, you’re kind of moved by the currents, but you’re not being slapped around at the top of the water by the waves. And that’s sort of what meditation is like.” – Anderson Cooper

“One of the things that Jon Kabat-Zinnn talks about is that everyone wants to figure out how to live longer. But this actually is a very easy way for you to live longer, maybe you’re not extending your life, but you are present and living more of the moments of your life.” – Anderson Cooper

“I meditate. Like, I try. Not every day, but even if I’m not doing that meditation, the moments of my day have changed because I’m not on my phone so much. I’m intentionally not checking my phone every two seconds.” – Anderson Cooper

Now that you know all about Anderson Cooper’s net worth, and how he achieved success; let’s take a look at some of the lessons we can learn from him:

1. It’s Never Too Late To Change a Relationship

The honest conversations between Anderson and his mom made him understand his mom more since he learned about her past and the challenges that she had been through. It also made them closer to each other.

Anderson is grateful that both his parents listened to him and his brother’s ideas and opinions and that they were treated as people who deserved respect even when they were children.

He values the fact that his parents encouraged them to form their own opinions and did not dictate or tell them what to do or think since it had a tremendous impact on the person that he has become today.

It gave him confidence and a deeply held belief that he was valued and worthy.

3. Have The Drive To Create & Achieve Something On Your Own

Anderson admires his mom for always having a tremendous drive to create and achieve, unlike many people who inherit money.

He is also thankful that his parents told him that he would not be inheriting any money and would be on his own financially after college.

He did not feel privileged and certainly had the drive to achieve something on his own.

How much is Anderson Cooper worth?

Anderson Cooper’s net worth is estimated to be $50 Million.

How old is Anderson Cooper?

How tall is Anderson Cooper?

As of December 2022, Anderson Cooper’s net worth is roughly $50 Million.

What do you think about Anderson Cooper’s net worth? Leave a comment below.