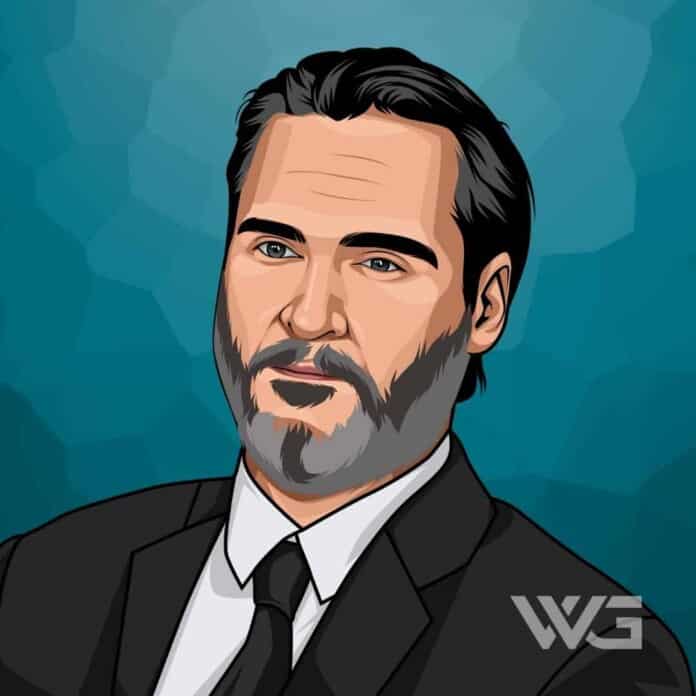 What is Joaquin Phoenix’s net worth?

As of December 2022, Joaquin Phoenix’s net worth is approximately $60 Million.

Joaquin Phoenix is an American actor and producer, who has received several accolades, including a Grammy Award, a Golden Globe Award, and nominations for three Academy Awards.

Joaquin Rafael Phoenix was born on the 28th of October, 1974, in San Juan. His parents were ardent followers of the Children of God missionary. He had four siblings, River, Rain, Liberty, and Summer.

His parents soon became disillusioned with the religious view of the group finally distancing themselves from it. They returned to the United States in 1978 and took up Phoenix as their new surname which explains Joaquin being known as Joaquin Phoenix.

Phoenix’s first stint at acting was in 1982 as a guest appearance in River’s breakthrough television series, ‘Seven Brides for Seven Brothers’. During this time, he used the name, ‘Leaf Phoenix’.

His big break came in 1986 with the kid’s adventure flick, ‘SpaceCamp’ wherein he was cast in a supporting role as a wannabe astronaut, Max. Later, he was cast in Alfred Hitchcock’s episode of ‘A Very happy Ending’ and in the primetime drama, ‘Morning/Evening Star’.

Tragedy struck him in 1993 when his brother River died. The immature and sudden death brought him back to the limelight and in the public eye, He resumed to take up acting professionally, switching to using his birth name.

In 2004, he collaborated with Shyamalan yet again to come up with the tale, ‘The Village’, wherein he played the character of a lovestruck farmer.

He then came up with a documentary film, ‘I’m Still Here’ with Casey Affleck. The film debuted at the Venice Film Festival and the Toronto International Film Festival in 2010. Following a self-imposed two year hiatus from acting, he returned to the big screen with Paul Thomas Anderson’s film ‘The Master’ in 2012.

In 2019, he starred in ‘Joker’, which he has received lots of accolades for.

Here are some of the best highlights of Joaquin Phoenix career:

“I still have a hard time saying who Johnny [ Cash ] is in one sentence. He seemed so contradictory in his actions, and I think that’s probably what is most fascinating about him and what made him such an interesting character to study.” – Joaquin Phoenix

“Every single movie that I’ve ever done has affected my life; I always feel more changed by a character than I affect them or change them, always. I mean, that’s just kind of the way it is.” – Joaquin Phoenix

“My family and I were on a boat, catching fish. As one fish was caught, he was writhing, then he was thrown against the side of the boat. You couldn’t disguise what it was. This was what we did to animals to eat them. The animal went from a living, vibrant creature fighting for life to a violent death. I recognized it, as did my brothers and sisters.” – Joaquin Phoenix

Now that you know all about Joaquin Phoenix’s net worth, and how he achieved success; let’s take a look at some of the lessons we can learn from him:

It is clear that people worried about the concepts of the film permeating its viewer’s minds in the wrong way. Rather than inspiring them to pay attention to those who suffer, fears it would incite violence prevailed.

As a society, we need to lift the taboo placed on mental health and accept it as openly as we do with physical disabilities.

In the United States alone, it is estimated that 43.8 million adults suffer from some type of mental illness. It is time to offer a wholehearted round of applause to everyone involved in bringing Joker and its unsettling elements to the forefront of our minds.

Joker is seen numerous times throughout the film meeting with his psychiatrist for therapy and claims that she doesn’t actually listen to what he says. This was a cry for help that seemingly fell on deaf ears.

Is this a nod to society’s stigma placed on mental health issues?

Perhaps, a “Don’t Ask, Don’t Tell” approach? Was Joker written to bring mental health to the mainstream using a popular culture icon to help boost its impact? Whatever the intention, Joker has undoubtedly brought this controversial subject out of society’s self-imposed entombment.

How much is Joaquin Phoenix worth?

Joaquin Phoenix’s net worth is estimated to be $60 Million.

How old is Joaquin Phoenix?

How tall is Joaquin Phoenix?

Joaquin Phoenix polished his acting skills to become a refine actor of his young age. While he starred in a number of films since his debut in 1986, his big break came with the historical epic, ‘Gladiator’ which won him immense fame and acclaim as an actor.

What do you think about Joaquin Phoenix’s net worth? Leave a comment below.