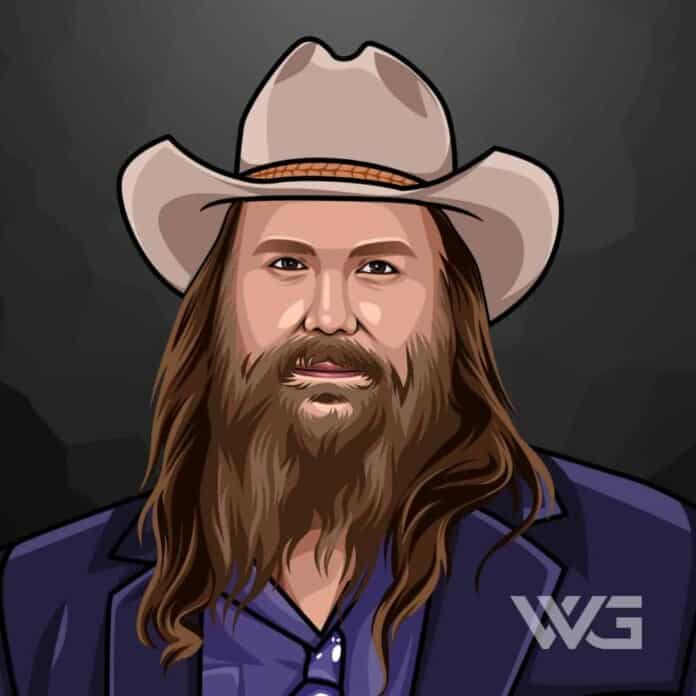 What is Chris Stapleton’s net worth?

Chris Stapleton is an American singer-songwriter, guitarist, and record producer.

Subsequently, Stapleton signed a contract with Sea Gayle Music to write and publish his music. Over 150 songs have been included in albums by different artists like Adele, Luke Bryan, and Tim McGraw.

As of February 2023, Chris Stapleton’s net worth is estimated to be $12 Million.

Christopher Alvin Stapleton was born on the 15th of April 15, 1978, in Lexington, Kentucky.

Herbert Joseph Stapleton, Jr., was a coal miner, and his mother, Carol J. Stapleton, worked at the local health department.

Stapleton grew up in a small town called Staffordsville with his elder brother, Herbert Joseph III, and a younger sister, Melanie Brooke. He graduated from Johnson Central High School.

Stapleton moved to Nashville, Tennessee, in 2001 to become a songwriter. Within four days of reaching Nashville, he signed a contract with Sea Gayle Music publishing house. Over the next decade, he wrote many hit songs for many renowned musicians like Kenny Chesney, George Strait, Luke Bryan, and Thomas Rhett.

He co-wrote several country songs, many of which reached the number one spot on the charts and stayed at the top for weeks.

In 2013, Stapleton signed to Mercury Nashville to pursue a solo career. Many of the songs written by Stapleton have been included on the soundtracks of popular movies like ‘Valentine’s Day, ‘Alvin and the Chipmunks: The Road Chip,’ and ‘Hell or High Water.

In 2016, he performed live at the Country to Country festival in Europe and Kacey Musgraves, Andrew Combs, and Eric Church. He also appeared as a guest on a ‘Saturday Night Live’ episode and performed ‘Parachute’ and ‘Nobody to Blame’ from ‘Traveller.’

The following year, the English singer Sir Elton John requested Stapleton to record ‘I Want Love’ for one of his albums, ‘Restoration: Reimagining the Songs of Elton John and Bernie Taupin.’

As of February 2023, Chris Stapleton’s net worth is estimated to be roughly $12 Million.

How Does Chris Stapleton Spend His Money?

Chris Stapleton spends some of his money on charity work.

Stapleton has helped charities such as Farm Aid and MusiCares.

Here are some of the best highlights of Chris Stapleton’s career:

“I think the path is different for everybody. Go after the doors that are open to you. That has always been my motto for getting into the music business. Do the things that seem to be good opportunities and work hard at them. Try to make good decisions and be nice. Hopefully, all of that will pay off at some point.” – Chris Stapleton

“I write the songs and hand it over to the world and see what happens. But the things that I’ve written for people that have been hit, I don’t know that I would have directed them in the right path, but they wound up on the right path.” – Chris Stapleton

“We have that storytelling history in the country and bluegrass and old-time and folk music, blues – all those things that combine to make up the genre. It was probably storytelling before it was songwriting, as far as country music is concerned. It’s fun to be a part of that and tip the hat to that. You know and keep that tradition alive.” – Chris Stapleton

“I walked into a demo session one time, and a guy said, ‘I’m thinking kind of like a Trace Adkins thing.’ And I looked him right in the eye and said, ‘Man, you’ve got the wrong guy. I’m gonna have to fire myself. You’ve got to hire somebody else.” – Chris Stapleton

“In the kind of fast-food world that we live in, where everything’s so fast-paced, and it’s, ‘Look over here! Look over there,’ we don’t really take the time to sit down and enjoy music – or anything else, for that matter.” – Chris Stapleton

Now that you know all about Chris Stapleton’s net worth and how he achieved success; let’s take a look at some of the lessons we can learn from him:

It would help if you never stopped learning in life. You are never too old to learn, and you should never stop wanting to learn. It is one of the great joys in life.

Sometimes you have to take a chance to see how it will work out. But you have to start the ‘doing’ first.

3. Fight For What You Believe In

How much is Chris Stapleton worth?

Chris Stapleton’s net worth is estimated to be $12 Million.

How old is Chris Stapleton?

How tall is Chris Stapleton?

Chris Stapleton is an American singer-songwriter and guitarist who has written songs for artists including Adele, Tim McGraw, Luke Bryan, Dierks Bentley, and Brad Paisley.

He was the lead man for the bluegrass band The SteelDrivers from 2008 to 2010. He has won five Grammy Awards and seven Academy of Country Music Awards throughout his career.

As of February 2023, Chris Stapleton’s net worth is estimated to be $12 Million.

What do you think about Chris Stapleton’s net worth? Leave a comment below.