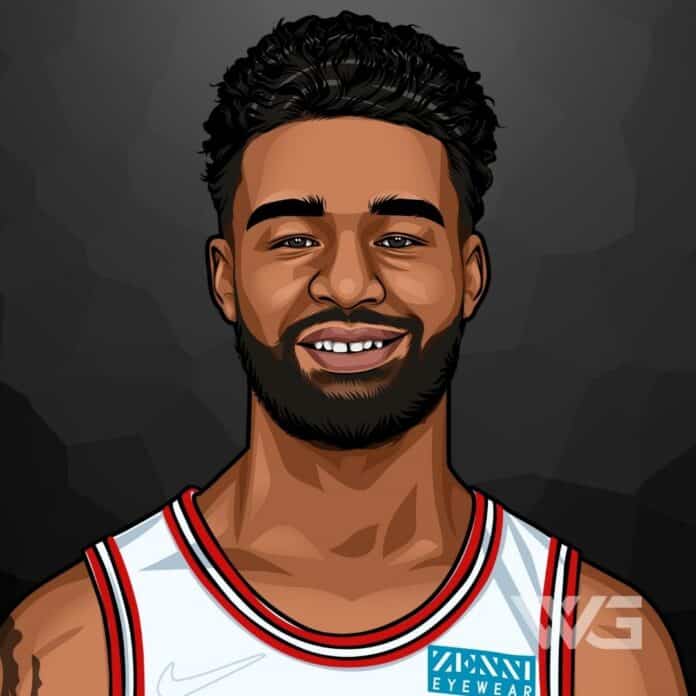 What is Coby White’s net worth?

Coby White is an American professional basketball player who is currently a shooting guard for the NBA’s Chicago Bulls.

White was the seventh overall selection in the 2019 NBA Draft after spending his college career with the University of North Carolina.

Alec Jacoby White was born February 16, 2000 in Goldsboro, North Carolina and grew up in the state.

White attended high school in Wilson, North Carolina where he was North Carolina Mr. Basketball, played on the Chris Paul AAU team, and was in the McDonald’s All-American Game.

A five-star recruit, White received many scholarship offers and was part of the FIBA Under-18 Americas Championship in Canada before deciding to sign his national letter of intent with UNC.

White was expected to play just one season in college, and did just that with the Tar Heels where he was named to the ACC All-Freshman Team.

Forgoing the final three years of his NCAA eligibility, Coby White declared for the 2019 NBA Draft and was selected seventh overall by the Chicago Bulls.

White impressed right away as a bench player, putting up 13.2 points per game in his first year, earning himself a selection on the NBA All-Rookie Second Team in 2020 alongside Zion Williamson and Tyler Herro.

In his second year, White was thrust into the starting lineup, averaging more than 15 points to go along with 4.1 rebounds and 4.8 assists per game.

White saw his role reduced in the following two seasons, and is now a bench player with the Bulls once again as the gave more opportunities to the newly-drafted Ayo Dosunmu.

Upon being the ninth overall draft selection, Coby White’s salary was predetermined by the rookie contract scale.

The deal was for four years and $24.1 million, including a fourth year contract option for the Chicago Bulls that the team picked up.

Following the third year of the deal, White’s contract became eligible for an extension and his salary increased to $7.4 million in the 2022-23 season.

White is currently the seventh-highest paid member of the Bulls ahead of Andre Drummond and Derrick Jones Jr.

In 2023, White is eligible for a $9.9 million qualifying offer and will likely receive an extension from the Bulls that will continue to pay him handsomely.

White also established a solid net worth by being drafted so highly, earning him endorsement deals after leaving North Carolina.

Now, it’s estimated that White’s net worth is $15 million when endorsements and salaries are taken into consideration.

Coby White is the son of Bonita and Donald White, with his late father being a former basketball player at North Carolina Central.

White was raised alongside his two siblings, and his brother Will White is an assistant coach at Mars Hill University in North Carolina.

Coby White does not currently have children and has not been married, but has been in a committed relationship with former Northwestern volleyball player Danyelle Williams.

Coby White has been receiving accolades for his play since he was in high school and being compared to Gilbert Arenas, garnering nationwide attention for his unique skillset.

White continued to rack up awards when he made it to college and the NBA, becoming yet another former North Carolina basketball player to make it big in the league.

Here is a list of the awards and achievements Coby White has accomplished in his career:

White is hoping to return to the production level that earned him All-Rookie honors during his first year in the league to become an All-Star.

On top of that, White is also hoping to make a deeper playoff run than he did in 2021 and help the Chicago Bulls win their first title since Michael Jordan retired.

How Does Coby White Spend His Money?

At the start of his career, it appeared that Coby White was well on his way to being one of the richest NBA players in the world with his starting annual average salary well into the millions.

Instead of a vast car collection, White drives a Chevy Blazer that’s estimated to be over $35,000 with all of the added features.

White still lives in Chicago, but it doesn’t appear that he’s purchased a house just yet as he’s likely waiting for a potential contract extension from the Bulls.

It seems that Coby White’s career has been one highlight after another, dating back to when he was USA Today’s North Carolina Player of the Year.

White has played around the world as a member of the U-18 National Team and has set one career milestone after another.

Here are some of the best highlights of Coby White’s career:

The biggest highlight that any professional player can have is winning an NBA Championship, which White hopes to do with the Bulls.

Being named an All-Star for the first time and potentially a league Most Valuable Player wouldn’t be so bad, either, in White’s opinion.

Coby White has lived under a microscope dating back to his four-year career as the top prep scorer in all of North Carolina.

White has become a bit of an NBA celebrity, and has given many interviews over the years to give a little glimpse into his personal and professional life.

Here are our favorite quotes from Coby White:

Coby White has had some amazing highlight moments and has had to deal with some low moments to go along with them.

Now in his mid-20s and playing for one of the richest NBA teams, White has experienced a lot of the world and has some lessons to pass along to the younger generation.

Now that you know all about Coby White’s net worth, there is a lot to be learned from the former All-American.

Here are some of the best success lessons to learn from Coby White:

You can be told that you’re going to be the next big thing in whatever you do, but success won’t be guaranteed at any level.

People have to continue to work toward their dreams, and Coby White has accepted that, saying life isn’t perfect.

White said that after his starting position was taken from him, but he was willing to accept whatever role the team gave him in hopes of succeeding.

The people you work with will change on an almost daily basis, so listen to what everyone has to say throughout your career.

Some advice will be bad, but a lot of experienced people with great leadership will offer you advice along the way that you should listen to.

White has been able to learn from a lot of great basketball minds throughout his career, including DeMar DeRozan and Zach LaVine to name a few.

To be able to get through the ups and downs of any career, you have to stay mentally tough, and Coby White is a great example.

White has plenty of confidence in his abilities and wants to help the team win, making him a great addition to any locker room.

Coby White came into college basketball with high expectations, and those expectations only got higher when the Chicago Bulls drafted White.

So far, it’s been an up-and-down career for the point guard who’s trying to make a name for himself on the team that Michael Jordan made famous.

With a contract year quickly approaching, expect White to go all out next season in hopes of landing a lucrative deal with the Bulls.

What do you think about Coby White’s net worth? Leave a comment below.

Kimmo Timonen was an outstanding hockey player who earned millions from the sport, becoming extremely wealthy from 25 years as a defensive player.