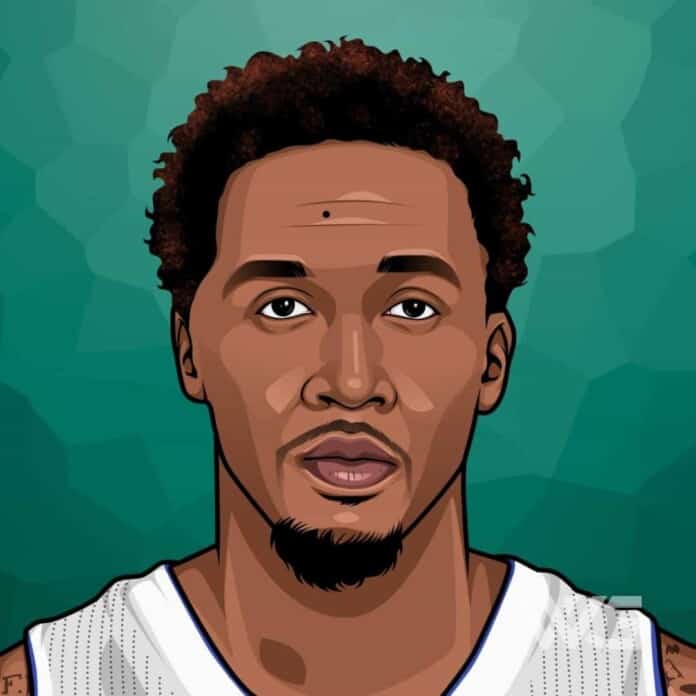 What is Brandon Jennings’ net worth?

Jennings played 9 seasons in the NBA. Jennings is well known for being one of the first Americans to go from high school to the pros in Europe. He decided to take his talent to the professional basketball club, Lottomatica Roma.

After a year in Italy, he declared for the NBA draft in 2009.

Brandon Byron Jennings was born on the 23rd of September, 1989, in Compton, California.

He has a half-brother named Terrence Phillips, a former guard at the University of Missouri. His father died when he was young.

Jennings attended Dominguez High School in Compton, California. Before his junior year, he transferred to powerhouse Oak Hill Academy in Virginia. In his last year of high school, Jennings averages 35.5 points per game.

In 2008, Jennings signed with Lottomatica Roma.

The contract he signed with Roma was for $1.65 million net income guaranteed. After earning the contract with Lottomatica, Under Armour gave Jennings a $2 million contract to showcase their products in the Euroleague.

He was selected 10th overall by the Milwaukee Bucks. in 2009 He became the first player who skipped college to play professional basketball.

Jennings made a notable appearance at the draft. Jennings initially decided not to attend the draft and preferred to be at a family function during the draft.

During his NBA debut season in 2009, against the Philadelphia 76ers, Jennings recorded 17 points, 9 rebounds, 9 assists, and hit 2 three-point shots, and played 34 minutes.

The same year, Jennings scored 29 points against the Golden State en route to a total of 55 points in the game to break the team record for most points by a rookie previously set by Kareem Abdul-Jabbar in 1970.

How Does Brandon Jennings Spend His Money?

Brandon Jenning spends his money on real estate and cars.

It’s very common for NBA players to drive fancy cars, but Jenning has a different outlook. He drives a Ford Edge, basically because it gets the job done.

Here are some of the best highlights of Brandon Jennings’ career:

“Yes. They spent over four years in research and development to make sure the grip wasn’t too intense because that could lead to injury. Too much grip makes you stiff, and that’s how injuries happen. There has to be a fine balance.” – Brandon Jennings

“Improving my shot was a focus for this past offseason. During the lockout year, my focus was the basics, sharpening my moves, my fundamentals. This past offseason, I would just shoot. Even on my workout days, I would still get shots up after the workout.” – Brandon Jennings

“Obviously, in Europe, I saw the move a lot, but I didn’t really work on it much until I was in the NBA. Now it’s almost second nature on a fast break to get to the basket and avoid a defender.” – Brandon Jennings

“Monta’s game and mine are similar, really. We are both quick. We both like to run. He might go to the basket a little more than I do, but you have to respect both of our shots.” – Brandon Jennings

“Without a doubt. Once I make two in a row, I have to shoot the next one. If that third one goes in, it’s going to be a good night. I mean, shoot, ask Golden State if there is such thing as a “hot hand?” – Brandon Jennings

“Probably go to this spot called Casablanca. It’s a Middle Eastern restaurant and hookah lounge. Great food and relaxed vibe. You can’t beat that. If not that, then PF Chang’s.” – Brandon Jennings

Now that you know all about Brandon Jennings’ net worth and how he achieved success; let’s take a look at some of the lessons we can learn from him:

The harder you work when nobody’s watching, the less you bleed when it’s time to perform.

Sometimes you have to change. You know change is always good. We have to go out of our comfort zone to change into better people.

How much is Brandon Jennings worth?

Brandon Jennings’ net worth is estimated to be $16 Million.

How old is Brandon Jennings?

How tall is Brandon Jennings?

Jennings was born in Compton, California. He set a record for most points in a season as a senior at Oak Hill Academy. Jennings won the Naismith Prep Player of the Year in 2008.

He was the first ranked high school prospect by ESPNU and Scout.com. He signed with Lottomatica Roma after intending to play at USC.

What do you think about Brandon Jennings’ net worth? Leave a comment below.