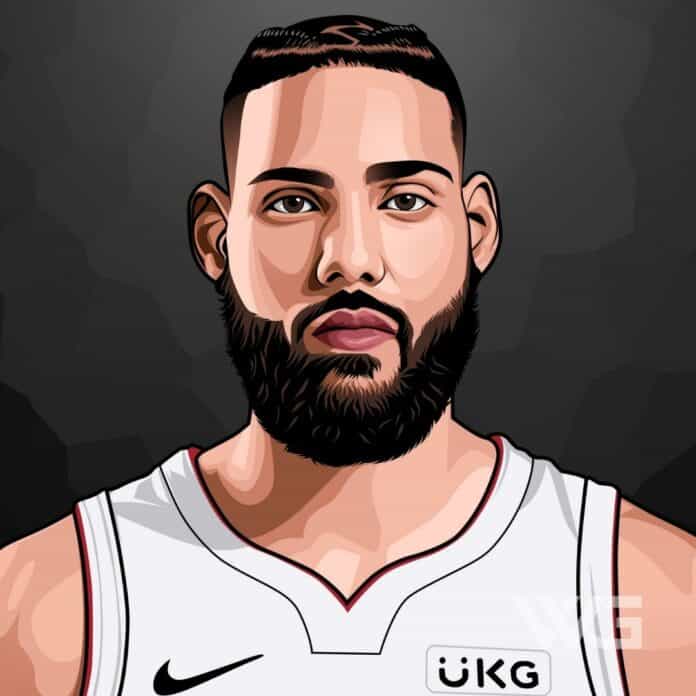 What is Caleb Martin’s net worth?

Caleb Martin is an American professional basketball player who is currently a forward for the NBA’s Miami Heat.

Martin attended both North Carolina State and Nevada during his college days, but went undrafted in 2019 despite his impressive amateur career.

As of February 2023, Caleb Martin’s net worth is estimated to be $7 Million.

Caleb Martin was born September 28, 1995 on the same day as his twin brother Cody in Winston-Salem, North Carolina.

Both of the Martin twins were standout athletes and attended the sports-focused Oak Hill Academy in Mouth of Wilson, Virginia.

While there, Caleb Martin was a three-star basketball prospect that was ranked 60th in the nation and committed to play at North Carolina State.

Caleb and Cody Martin played for two seasons at NC State before transferring to Nevada to play for Eric Musselman.

While playing for the Nevada Wolfpack, Caleb Martin won the Mountain West Player of the Year Award in his first season as the team reached the Sweet 16 in the NCAA Tournament.

In both seasons, Martin was named to the All-Mountain West Team and represented the conference well in the postseason.

After the 2018-19 NCAA season, Caleb Martin and his brother were out of eligibility and declared for the NBA Draft, with Cody being selected by the Charlotte Hornets in the second round.

Caleb joined Cody as an undrafted free agent in Charlotte where he played in 71 total games and averaged 5.3 points per game before joining the Miami Heat prior to the 2021-22 NBA season.

Since he was undrafted, Martin was one of the lowest paid players in the NBA upon his arrival into the league.

As part of his two-way contract with the Hornets, Martin was earning the league minimum in his rookie season that included $500,000 in guarantees and a total potential for $4.2 million over three years.

The figures of Caleb Martin’s earnings are based on his publicly announced contracts, but are not guaranteed to be 100% accurate.

The 2023-24 and 2024-25 NBA seasons will see Martin’s salary increase dramatically as he’s scheduled to make $6.8 million in the first season and a player option worth $7.1 million in the latter.

Though his salary isn’t as high as former Heat greats like Chris Bosh or Dwyane Wade, Martin is certainly taking advantage of the increased salaries in the NBA as the cap continues to rise.

Like many undrafted players, Martin had to fight to make an NBA roster to secure his financial future after making the league minimum to start.

Since then, Martin has signed multiple contracts, with his biggest financial breakthrough being his three-year deal with the Miami Heat in 2022.

The figures of Caleb Martin’s net worth are estimated in regard to his NBA salaries and endorsements and are not guaranteed to be 100% accurate.

Here’s a breakdown of Caleb Martin’s annual net worth:

With his contract extension, Martin’s net worth will be far more secure than it was when he entered the NBA, with a fully guaranteed contract worth over $20.4 million and a potential 15 percent bonus if he’s traded.

Martin’s net worth was nothing to scoff at prior to the 2021-22 season, but he has been able to more than triple his net worth in the course of just a year thanks to the new contract that he signed.

Cody and his twin brother Cody were raised in the small town of Cooleemee, North Carolina to a single mother named Jenny Bennett.

Along with Cody, Caleb Martin runs an annual basketball camp in Reno, Nevada that benefits the Boys and Girls Clubs of America.

Martin hasn’t been involved in any high profile relationships, and is currently believed to be single with no children.

Caleb Martin is active on social media with an official Instagram account where he updates time to time, typically showing off his fashion choices.

Caleb Martin has been a notable basketball player since his high school days, earning a lot of awards in the process.

Most of Martin’s awards came from his NCAA career where he was one of the most decorated players in college for two seasons.

Here are some of the awards and achievements from Caleb Martin’s career:

Martin is now getting into the prime of his career, so earning more awards at the professional level is not out of the question.

As Martin earns more playing time with the Miami Heat, he hopes to one day be named to the NBA All Star Team.

How Does Caleb Martin Spend His Money?

Though he doesn’t find himself among the richest NBA players in the world, Caleb Martin’s new contract offers him a lot of money to play around with.

Upon earning a two-way contract in the NBA, Martin didn’t have much left over to spend after collecting his checks in his first season but was able to buy his mother an SUV after his rookie year.

Because of his humble upbringing, Martin isn’t known to be a big spender and even opts to purchase more affordable clothing.

Now that one of the richest NBA teams is paying him several million per year, Martin will have more opportunities to finally land one of the most expensive cars or most expensive houses by the end of his career

Caleb Martin earned a lot of accolades during his college career, and is looking to add more individual and team awards in the NBA.

When taking his NCAA and NBA careers into consideration, Martin has achieved a lot in a short amount of time.

Here are some of the best highlights of Caleb Martin’s career:

Caleb Martin will undoubtedly have more opportunities to add to his legacy in the NBA.

Gone are the days or Martin signing two-way contract deals with teams as he fits well into the Miami Heat roster.

Caleb Martin was highly touted coming out of high school and earned a lot of publicity during his college days.

Martin and his brother have given many interviews about their lives, and have offered up some musings over the years.

Here are our favorite quotes from Caleb Martin:

Caleb Martin and his brother had to grow up quickly because of their living situation during childhood, but stayed determined.

Martin has learned a lot of valuable lessons over the years and has passed them on to those that may be in a similar situation.

Now that you know all about Caleb Martin’s net worth, a lot can be learned from the standout college player that has carved his own path in the NBA.

Here are some of the best success lessons to learn from Caleb Martin:

In the NBA, franchises are often willing to give longer-term contracts for less money on average in hopes they can acquire a player for cheap.

Then, there are players like Martin who want to ditch the two-way contract standard and bet on themselves with short-term deals.

Martin was able to find a permanent roster spot for himself and has enhanced his potential earnings as a result over the next few years.

Nobody taught Caleb Martin more about work ethic than his mother, who raised him and Cody singlehandedly after their father abandoned them.

Martin’s mother Jennifer would often go without eating dinner after the twins were fed while still dealing with the prejudice of being a white mother with mixed-race sons.

While it might not have been apparent for Martin as a child, he now sees the amount of work his mother put in to help his basketball career.

3. Confidence Can Be Built

When he was starting out his NBA career, Martin was a bit apprehensive to take certain shots as he felt it wasn’t his position to do so.

Over the years, Martin became more comfortable in his role and was taking on extra responsibilities on the court to earn more looks.

What he originally thought might be a short stint in the NBA has turned into a full-fledged career thanks to the confidence that Martin has shown in his abilities.

Caleb Martin is coming into the prime of his NBA career and establishing himself on the Miami Heat roster.

The franchise has plans for Martin to be used more often in the next couple of years, showing confidence in the player by signing him to a large contract.

With Caleb Martin on the roster, the Miami Heat look to be NBA title contenders and hope to get him his first championship ring.

As of February 2023, Caleb Martin’s net worth is estimated to be $7 Million.

What do you think about Caleb Martin’s net worth? Leave a comment below.