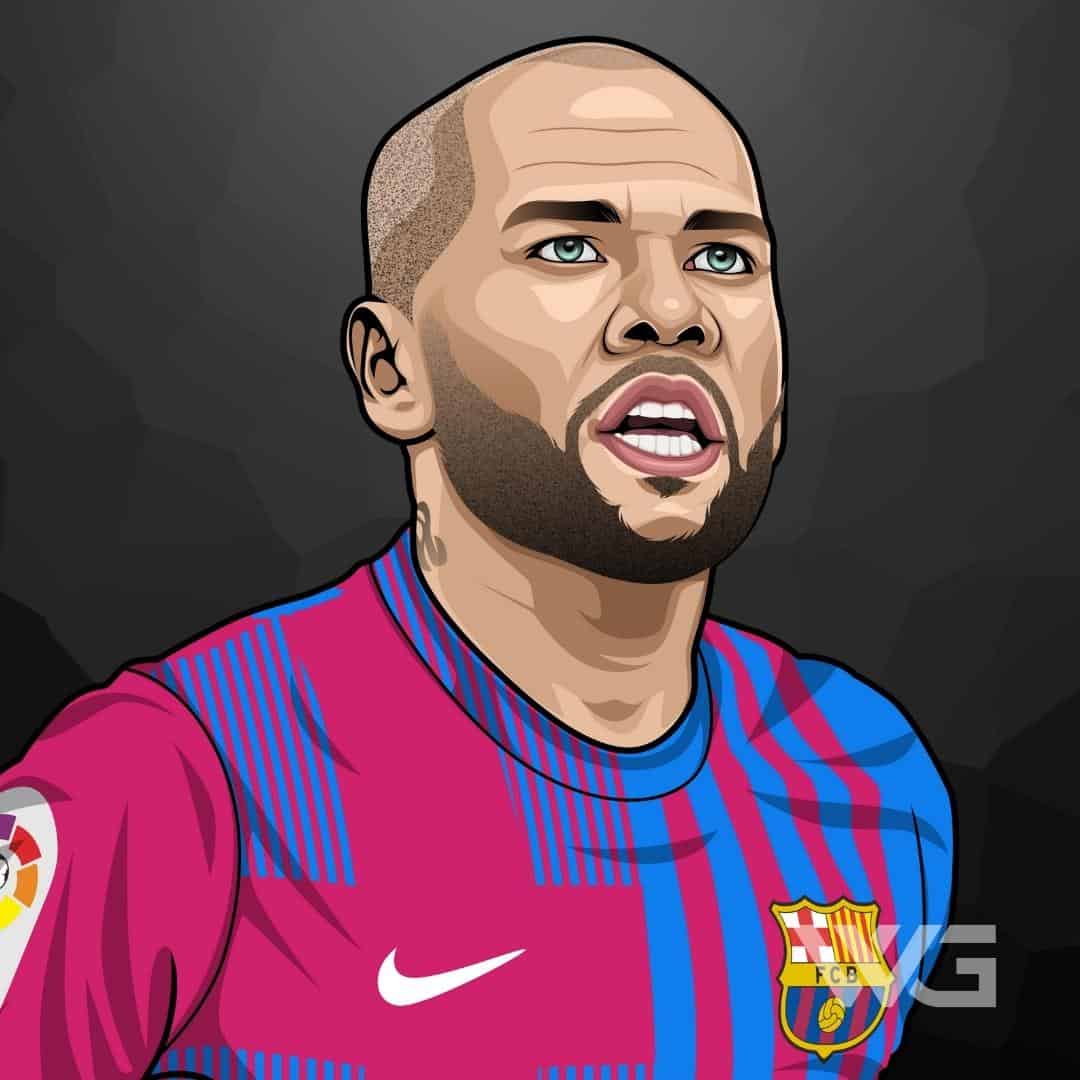 What is Dani Alves’s net worth?

His career started in 2001 at Bahia and ever since then, Dani has enjoyed huge success at his clubs. He joined Barcelona for $32.5 million, which made him the third-most-expensive defender in the world at the time.

This highly valued player is considered one of the greatest fullbacks of all time.

Being one of the strongest and most intense right-sided players in the world, Dani Alves dominates as a right-back for La Liga club, Barcelona, and the Brazil national team.

Daniel Alves da Silva was born 6 May 1983, in the Brazilian state of Bahia, also known as Juazeiro. His father, Domingos Alves da Silva, was a farmer with a passion for football. He managed to organize a team for young Dani, who started as a winger.

Because of his lack of goal scoring, his father decided to reposition him to right back, and the legend was born.

During his youth, Dani worked as a farmer and a trader to make money to maintain his youth career. From an early age, Dani used to wake up with his father in the early hours of the morning to work in the fields of Salitre, located 30km outside of his hometown.

Dani’s mother, Maria Lucia, is a housekeeper and has supported her son since the very beginning of his football career.

Dani has a sister, Lucania, who you can usually find helping him with his official Instagram account or with the rest of his family, accompanying him to his training sessions.

Dani debuted as a professional for Bahia against Parana Clube in 2020.

2 years later, his brilliant defense landed him a transfer to Sevilla. He joined Barcelona in 2008, leaving Sevilla for the limelight of playing at the legendary Spanish club. The official price of the transfer is believed to stand at $23 million with $7 million more based on his performance. This made him one of the most expensive defenders in history.

He signed a four-year contract with one of the richest soccer teams in Europe, Barcelona, which had a buy-out clause of $90 million.

On the 27th of June 2016, Juventus announced that they would be signing Alves for a two-year deal, with an option of playing with them for the third year. After a successful year with Juventus, Alves had his contract terminated in 2017 by mutual consent.

In 2017, Alves joined the French side, Paris Saint Germain, on a free transfer. Amazingly, the club that’s signed some of the richest soccer players in the world, got Dani for a song.

He signed a two-year contract and made his debut for the club on the 29th of July, 2017 in the Trophee de Champions. After the expiration of his contract on the 30th of June 2019, Dani joined Sao Paulo on the 1st of August 2019.

On the 12th of November, 2021, Dani returned to Barcelona for a final season with the Spanish giants. He confirmed on the 15th of July, 2022, that he would be leaving Barcelona for the second time, signing a one-year contract with UNAM.

Dani Alves is believed to earn a total salary of $3.2 million per year, as well as endorsements from Adidas. He took a massive drop in salary when he transferred to San Paulo in 2019 and was the lowest-paid player in La Liga after returning to Barcelona in the 2020-2021 season.

Here’s an estimated overview of

Dani Alves made the majority of his money playing for Barcelona. During the time he was with them, they were the dominant soccer club in the world and his net worth sky-rocketed.

Here’s a breakdown of Dani Alves’s annual net worth:

Dani and Dinora Santana got married in 2008 and went on to have two children, Daniel and Vitoria. They were married for three years before deciding on a divorce. Even with the divorce, Dinora continued to be there for Dani and remained his agent.

The two are still involved with Dinora and Dani being partners in five companies together. In 2017, Dani decided to remarry and proposed to one of the richest models in the world, the Spanish model, Joana Sanz. They were wed in a secret ceremony in Ibiza.

On the 29th of September 2011, Alves was appointed as a Special Olympics Ambassador for the Global Football program. In 2021, Dani was appointed as an Earth shot Prize council member, which is led by Prince William, Duke of Cambridge, after indicating he was supported by Jair Bolsonaro.

From a poor family in Brazil, Dani Alves has proven that humble beginnings are no obstacle for a player with a strong belief in himself. He’s played for the best soccer teams in the world and proven his ability under the most difficult circumstances.

Here are some highlights from Dani Alves’s career:

How does Dani Alves Spend His Money?

Dani is known to love cars, with his car collection including some of the most expensive cars in the world. His garage contains an Audi Q7, Ferrari California T, Ferrari FF, and an Audi RS6 Avant.

Dani is also known to be one of the most generous stars amongst the top-earning European soccer stars. He attends charity auctions and helps out charities that are in desperate need. His generosity is legendary and is a fitting testament to this ambassador of the “beautiful game”.

From a life of poverty in Brazil to the greatest stadiums in the world, Dani Alves stands out as an exceptional player. He’s played for some of the richest soccer teams in the world, Catalonian giants, Barcelona, and Paris Saint Germain.

Here are some of the best highlights of Dani Alves’s career:

Dani Alves is a humble individual who plays for the love of the game. Despite his stature and experience, he returned to Barcelona to play for the club when it was facing its worst position in decades.

Here are our favorite quotes from Dani Alves:

Going from the poorest areas in Brazil to the richest stadiums in Europe is not an easy task. The amount of hard work and tenacity needed to succeed makes Alves’ achievements even more incredible.

Now that you know all about Dani Alves’s net worth, here are some of the best success lessons to learn from Dani Alves:

1. It Is Always Possible To Achieve Your Dreams

Dani has proven that no matter your background, you can achieve an impossible dream.

2. Always Remember Where You Came From

Soccer has a way of providing opportunities for players from the poorest backgrounds. Dani Alves has never forgotten his roots and has not forgotten the sacrifices that his parents made to help him achieve his goals.

3. Stay Humble And Give When You See Those In Need

Despite his fame and fortune, Dani Alves has retained the common touch. He is generous with his time and money and stays humble.

Dani Alves can be seen as someone who started from nothing but made himself into one of the most well-known players in footballing history. He had a dream and he set out to achieve greatness.

Dani will continue to increase his net worth while captivating the world with his amazing football skills and talent. So, check back here regularly as we update you on his career.

What do you think about Dani Alves’s net worth? Leave a comment below.

Former hockey player and current head coach of the Montreal Canadiens, Martin St. Louis, has earned a substantial net worth for his talents on the ice.