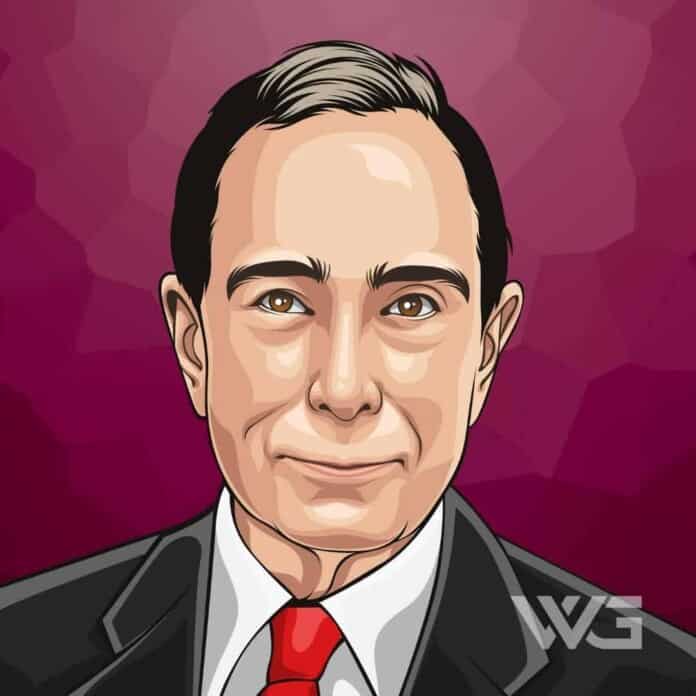 What is Michael Bloomberg’s net worth?

As of February 2023, Michael Bloomberg’s net worth is about $70 Billion.

Michael Bloomberg is one of the wealthiest people in the world, as he is the majority owner and founder of the global financial media and data company Bloomberg L.P.

As well as being a world-renowned businessman, he is also known for having been the mayor of New York City several times and being an esteemed philanthropist.

Michael Bloomberg was born on February 14, 1942, in Boston Massachusetts.

After completing high school, he attended John Hopkins University and graduated in 1964 with a bachelor of science degree in electrical engineering.

After getting his bachelor’s degree, he attended Harvard Business School and graduated in 1966 with a master’s degree in business administration.

After graduating from college in 1966, he took a job at Salomón Brothers, which was a Wall Street investment bank.

While working there, he began to move up the ranks within the company and eventually became a general partner is 1973.

In 1981 the bank was purchased by Phibro Corporation, and he was fired and received a $10 million severance package.

In 1982 using the money from the severance package he established ‘Innovative Market Systems’ his very own financial data service firm. He was even able to get Merrill Lynch the wealth management division from the Bank of America as a customer.

The company turned out to be a huge success and was named Bloomberg L.P. in 1987, and it now has other things like Bloomberg Message and Bloomberg News.

Although, Bloomberg would soon be gone to pursue his political career. He won his first election while running for mayor in 2002 and he also won the following election in 2005 and again in 2009.

For the most part, Bloomberg has shown that he is socially liberal and supports things such as abortion rights, citizenship for illegal immigrants, and same-sex marriage.

Here are some of the best highlights of Michael Bloomberg’s career:

“Being an entrepreneur isn’t really about starting a business. It’s a way of looking at the world: seeing opportunity where others see obstacles, taking risks when others take refuge.” – Michael Bloomberg

“Don’t be afraid to assert yourself, have confidence in your abilities and don’t let the bastards get you down.” – Michael Bloomberg

“Progress is not inevitable. It’s up to us to create it.” – Michael Bloomberg

“Entrepreneurship is having an idea to do something great and not entirely have a plan on how to do it but the drive and willpower to make it work.” – Michael Bloomberg

3 Rules for Success from Michael Bloomberg

Now that you know all about Michael Bloomberg’s net worth, and how he achieved success, let’s take a look at some of the lessons we can learn from him:

Be assertive and confident in yourself and your abilities at all times. Establish yourself with pride and don’t let anyone get you down because you know who you are and what you can do.

2. Focus on opportunities rather than obstacles

Stay positive and focus on what opportunities you can go for instead of what obstacles are going to slow you down. Don’t let negativity and barriers stop you from being the best you can be.

3. We create our own progress

Progress is a way of life, but it is also a lifestyle that you have to choose in order to move forward and grow. Progression is valuable, and it can make the world of a difference if you are doing it right.

How much is Michael Bloomberg worth?

Michael Bloomberg’s net worth is estimated to be $70 Billion.

How old is Michael Bloomberg?

How tall is Michael Bloomberg?

Michael Bloomberg is one of the wealthiest men in the world and has earned a lot of his fortune through his own company.

Michael Bloomberg’s net worth approximately $70 Billion As of 2022.

What do you think about Michael Bloomberg’s net worth? Leave a comment below.