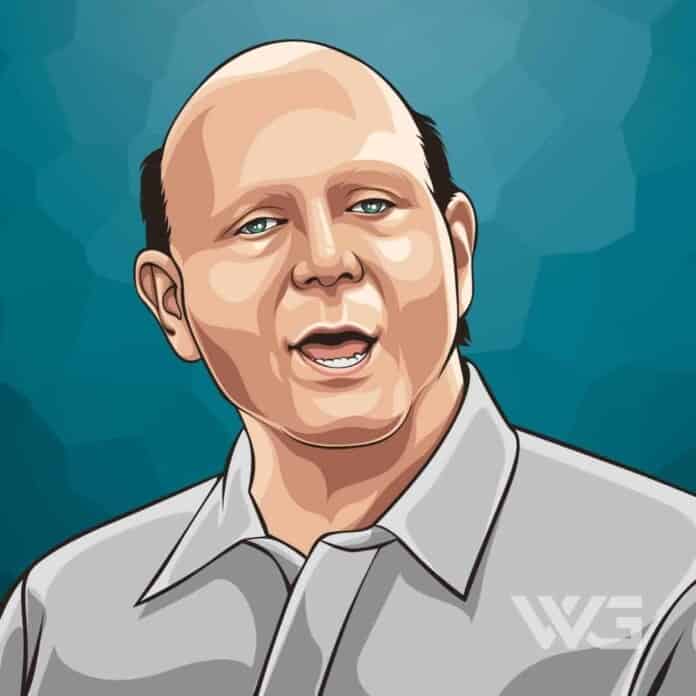 What is Steve Ballmer’s net worth?

As of February 2023, Steve Ballmer’s net worth is estimated to be roughly $92 Billion, making him one of the richest businessmen in the world.

Steven “Steve” Anthony Ballmer is an American investor, businessman, and philanthropist from Detroit. Ballmer is mostly known as the chief of Microsoft.

He is currently the owner of the Los Angeles Clippers.

In January 2018, Ballmer was ranked as the 21st richest businessman in the world.

Steven “Steve” Anthony Ballmer was born in Detroit, Michigan on the 24th of March, 1956. His father, Frederic Henry was a Swiss immigrant and his mother Beatrice was Belarusian Jewish.

At college, Ballmer was a manager for the Harvard Crimson football team and a member of the Fox club. Ballmer later joined Microsoft on June 11, 1980.

Steve Ballmer started his early career by completing his education in school. Ballmer’s college friend Bill Gates had dropped out of school to co-found Microsoft.

After completing his first year at the business school he approached his friend hoping for a summer job at his company. Bill Gates asked Ballmer to take a full-time job instead.

In 1980, Ballmer left the Stanford Graduate School of Business and later joined Microsoft.

One of his earliest roles was to recruit employees for the growing firm. After Microsoft signed a contract to create a system for IBM’s new line the co-founder busied with the technical aspects of the company.

He re-organized Microsoft’s partnership into a corporate structure. Gates later came to hold 53 percent of the equity and Ballmer 8%. Ballmer started to lead the operating system, the core of the company’s business in 1980.

In 1986 Microsoft became a publicly held company and Ballmer became a multimillionaire. Over the next several years Ballmer held many important positions in Microsoft and in 1992 he was made the Executive Vice President, Sales, and Support.

In 1988 Ballmer was promoted to President of Microsoft, a position he held until 2001. He was officially named CEO in 2000. He started to handle the company finances and daily operations. Microsoft registers a phenomenal increase in profits during Ballmer’s tenure as CEO.

Here are some of the best highlights of Steve Ballmer career:

“The number one benefit of information technology is that it empowers people to do what they want to do. think they could learn before, and so in a sense, it is all about potential.” – Steve Ballmer

“I come back to the same thing: We’ve got the greatest pipeline in the company’s history in the next 12 months, and we’ve had the most amazing financial results possible over the last five years, and we’re predicting being back at double-digit revenue growth in fiscal year ’06.” – Steve Ballmer

“All companies of any size have to continue to push to make sure you get the right leaders, the right team, the right people to be fast acting, and fast moving in the marketplace. We’ve got great leaders, and we continue to attract and promote great new leaders.” – Steve Ballmer

“Look at the product pipeline, look at the fantastic financial results we’ve had for the last five years. You only get that kind of performance on the innovation side, on the financial side, if you’re really listening and reacting to the best ideas of the people we have.” – Steve Ballmer

“If you look at companies with upside potential, Twitter’s right there. They’ve established a brand in a world where it’s extremely difficult to establish a brand. It’s a global brand, people recognize it, people want to let you know what their Twitter handles are, etc.” – Steve Ballmer

View our larger collection of the best Steve Ballmer quotes!

Now you know all about Steve Ballmer’s net worth, and how he achieved success; let’s take a look at some of the lessons we can learn from him:

1. Never Compare Yourself to Others

The only thing that matters is what you do with the cards you’ve been dealt. You have to stay grounded and honest with yourself on where you stand. Don’t compare yourself to others.

Our world is running with analytics. Numbers force you to look at the measurable facts, to ask for solid information and to constantly challenge what’s important.

Running a huge organization or company isn’t always easy. When you are talking to media, rambling at best wastes time and at worst loses the point, causes the listener to daydream and may result in saying something you didn’t mean to say. Ballmer always exemplified of brevity.

How much is Steve Ballmer worth?

Steve Ballmer’s net worth is estimated to be $92 Billion.

How old is Steve Ballmer?

How tall is Steve Ballmer?

Steve Ballmer is the 21st richest person in the world. After Bill Gates hired him in 1980, Ballmer gained a huge success with his work at Microsoft. He has also collaborated with NBA’s teams such as Los Angeles Clippers and Portland Trail Blazers.

As of February 2023, Steve Ballmer’s net worth is estimated to be roughly $92 Billion.

What do you think about Steve Ballmer’s net worth? Leave a comment below.