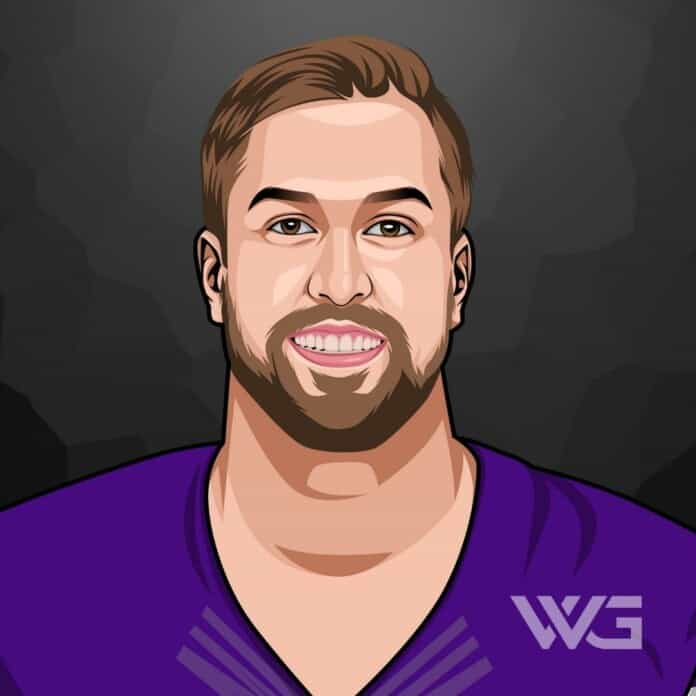 What is Adam Thielen’s net worth?

Adam Thielen is an American football wide receiver for the Minnesota Vikings of the NFL.

Thielen played college football at Minnesota State University, Mankato and signed with the Vikings as an undrafted free agent in 2013.

As of December 2022, Adam Thielen’s net worth is roughly $5 Million.

Adam John Thielen was born on the 22nd of August, 1990, in Detroit Lakes, Minnesota.

Thielen is the son of Pete and Jayne Thielen, Adam Thielen grew up rooting for the Vikings and idolized Pro Football Hall of Fame wide receiver Cris Carter.

After going undrafted in the 2013 NFL Draft, Thielen attended a rookie tryout and evaluation session at Winter Park with the Minnesota Vikings.

On May 6, 2013, the Minnesota Vikings signed Thielen to a three-year, $1.48 million contract as an undrafted free agent.

In the preseason opener against the Oakland Raiders, Thielen had one catch for 15 yards and three punt returns, including one 26-yard return.

Thielen made his NFL debut in the season opener in a road game against the St. Louis Rams on September 9. In Week 5, he caught his first NFL pass in the Vikings’ 42-10 road loss against the Green Bay Packers.

In 2017, in the season opener against the New Orleans Saints on Monday Night Football, Thielen started the season off strong with nine receptions for 157 yards.

On April 12, 2019, Thielen signed a four-year, $64 million contract extension with the Vikings with $35 million guaranteed, keeping him under contract through the 2024 season.

Here are some of the best highlights of Adam Thielen’s career:

“Growing up in Detroit Lakes, Minnesota, I was a huge Vikings fan. When I would play football in my backyard, I would pretend I was Cris Carter or Randy Moss. It was watching those guys and that ’98 Vikings team that really made me fall in love with football and want to be a wide receiver.” – Adam Thielen

“I wasn’t recruited out of high school. I actually thought basketball would be my sport in college. So after I graduated, I was planning on going to a Division III school to play basketball. And wherever I went, I was also going to try to play football.” – Adam Thielen

“I didn’t even know there was such a thing as a $500 scholarship. And that wasn’t even going to be enough to cover my books. But it was better than what I was being offered by anybody else, which was … nothing. So I didn’t even hesitate.” – Adam Thielen

Now that you know all about Adam Thielen’s net worth, and how he achieved success; let’s take a look at some of the lessons we can learn from him:

The only way to do great work is to love what you do. If you haven’t found it yet, keep looking, and don’t settle.

Things may come to those who wait, but only the things left by those who hustle and for those who never give up.

If you’re changing the world, you’re working on important things, you’re excited to get up in the morning.

How much is Adam Thielen worth?

Adam Thielen’s net worth is estimated to be $5 Million.

How old is Adam Thielen?

How tall is Adam Thielen?

Adam Thielen is an American professional football player who played his college football at Minnesota State University where he was named the team’s Offensive Player of the Year.

Thielen has tied a record for most consecutive 100 yard games in a year at eight which is tied with Calvin Johnson. Between 2014 and 2016, Adam earned a total of $1.5 million in the NFL.

As of December 2022, Adam Thielen’s net worth is estimated to be $5 Million.

What do you think about Adam Thielen’s net worth? Leave a comment below.