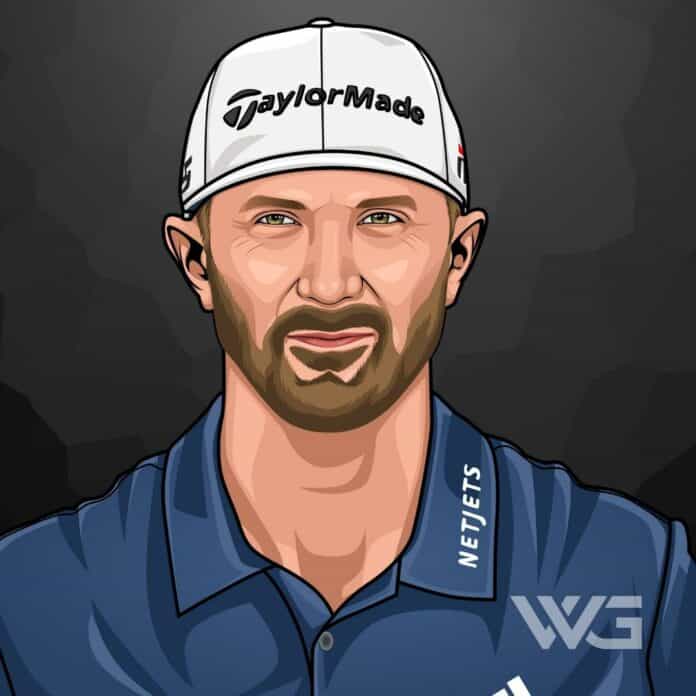 What is Dustin Johnson’s net worth?

Dustin Hunter Johnson is an American professional golfer who has a net worth of $100 million and has experienced an amazing winning streak his entire PGA career.

As of November 2022, Dustin Johnson’s net worth is estimated to be $100 Million.

As a golfer, it was only natural that Dustin’s father, Scott Johnson, introduced golf to Dustin at a young age.

By age 14, Dustin had won the state junior championship and also appeared on the winning US 2007 Walker Cup team.

Dustin was only 23 when he won the Monroe Invitational and the Northeast Amateur in 2007. After that, he turned pro in 2008.

It would only take a few more years on the tour for Dustin Johnson to beat David Duval, a former world number one golfer, to win his second Pebble Beach Pro-Am.

In 2012, Johnson suffered a back injury that sidelined him. Yet, he still managed to win the FedEx cup tour championship.

Johnson took time off in 2014 for “personal challenges,” but still got the WGC-HSBC Champions win during that season.

In 2016, he would start a three-year string of multiple wins. He won the U.S. Open, World Golf Championships-Bridgestone Invitational, and BMW Championship in 2016.

It was rumored that Dustin and Brooks Koepka had to be separated during an argument after the team lost the 2018 Ryder Cup.

In 2019, Dustin won the Travelers Championship and in 2020, he won the WGC Mexico Championship.

Dustin Johnson joined Tiger Woods and Jack Nicklaus in holding the elite honor of having won a PGA championship tour title each year he has been active.

He is also a philanthropist who created the Dustin Johnson Foundation, a nonprofit organization located in Murrells Inlet, South Carolina.

He started the Dustin Johnson Foundation to help young people in Myrtle Beach not only learn the game of golf, but also become future stars with a competitive edge.

As the third highest-earning golfer in PGA history, Dustin Johnson’s net worth is only superseded by that of Tiger Woods and Phil Mickelson.

During his PGA career, Dustin has averaged almost $5 million per year, due in part to his winning a title each year he has been on the tour.

Here’s an estimated overview of Dustin’s earnings by year:

Dustin Johnson earns extra money that increases his net worth when he makes personal appearances at events.

His net worth is also increased by his comfortable golf apparel, Dustin Johnson Collection, sold by Adidas.

For each year on the tour, Dustin Johnson has earned an average of almost $5 million.

Dustin Johnson’s net worth rose when he won four tournaments and took home over $5 million in tournament prize money as one of the richest golfers in the world.

After only seven months of dating, the couple became engaged, but did not marry until April 23, 2022.

When not golfing with the most expensive golf balls, Dustin enjoys water sports and traveling with his family.

As you might imagine, Dustin Johnson has received many accolades during his time on the PGA Tour.

In addition to holding the number one golfer in the world position since 2017, he also has won many other awards and honors.

Here are some of the best awards and achievements of his career to date:

Due to his many accolades, Dustin Johnson is one of the most recognizable longstanding PGA players on the tour.

How Does Dustin Johnson Spend His Money?

Dustin and his wife, Paulina, spent part of his net worth on some of the most expensive houses in Florida. The couple purchased a $3.355 million dollar home in North Palm Beach in 2015.

But, the couple upgraded when they sold that North Palm Beach home for a $14 million mansion in Jupiter’s Admirals Cove in 2021.

He also spends money looking good, as he has a large collection of suits from one of the richest designers in the world, Prada. Additionally, Dustin spends a lot of money on his equipment, including some of the most expensive golf clubs available.

Even if he stopped playing golf today, Dustin Johnson would be remembered as one of the highest earning professional golfers of all time.

Dustin has earned not only the love of fans, but also respect from his fellow golfers.

Here are some of the best highlights of Dustin Johnson’s career:

It would be impossible to list all the highlights of Dustin’s career as he has proven to be one of the most successful golfers since Tiger Woods, so we just listed a few of the best, in our opinion.

One nice thing about Dustin is he is very open about his golf game and how difficult it can be at times, even though he often makes it look easy.

He also has many quotes that remind young golfers that even though they may be down, they are not necessarily out.

Here are our favorite quotes from Dustin Johnson:

Dustin has proven that young golfers can be extremely successful on the PGA Tour and build up an enormous net worth.

1. Dustin Is Proof Positive That The Kids Are Alright.

There’s a new, promising field of under 25 players on the tour.

While Dustin Johnson makes it look like he is blessed on the course and everything comes to him easily, he puts in a lot of hard work that most people will never see.

Dustin Johnson’s net worth has provided him with a luxury lifestyle, as proven by his beautiful homes and luxury cars.

Dustin Hunter Johnson is an American golfer who immediately started proving his worth on the tour as soon as he got his PGA card.

He has won a title every year he has played and those wins have earned him an average of almost $5 million a year, making him one of the highest earning golfers.

It is only Tiger Woods who has won more World Championships than Dustin Johnson.

Because of Dustin’s many accomplishments in his golf career, it’s obvious that he is a natural at the game.

As of November 2022, Dustin Johnson’s net worth is estimated to be $100 Million.

What do you think about Dustin Johnson’s net worth? Leave a comment below.