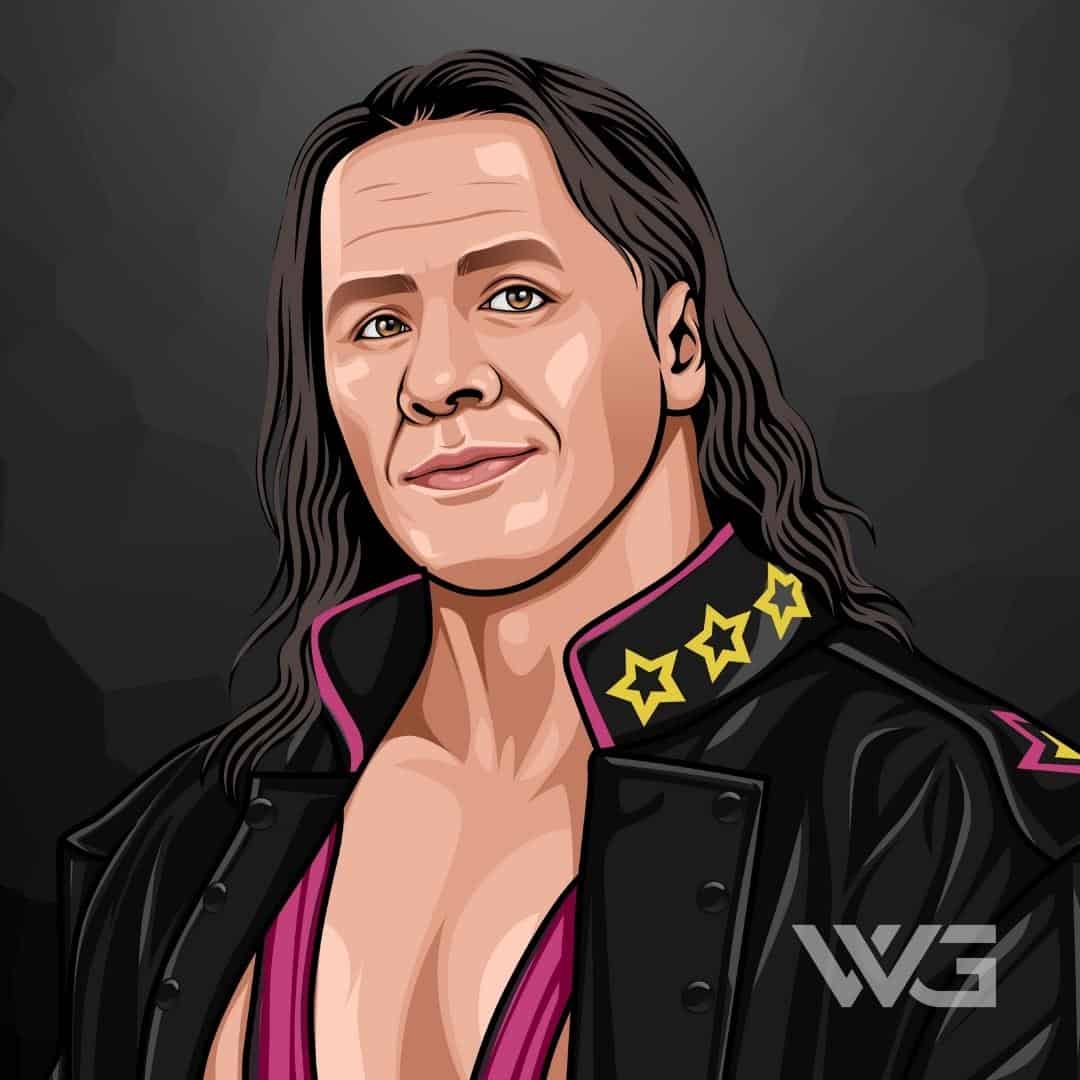 What is Bret Hart’s net worth?

Bret Hart is a Canadian-American retired professional wrestler and writer known for his exceptional run of championships over a period spanning five decades.

Competing in the WWE, WCW, and WWF, he has been inducted into the WWE Hall of Fame on two occasions.

Bret Hart was born in Calgary, Alberta, Canada on July 2, 1957, to a family of professional wrestlers including his father Stu Hart, who was famous for training wrestlers in his basement, known as The Dungeon.

He grew up in the family mansion as the eighth of eleven siblings, with seven brothers and four sisters, often fighting with them as a child.

With his family’s wrestling background, Bret began training from an early age and became a renowned amateur wrestler at Ernest Manning High School.

By the mid-1970s, Hart was studying filmmaking at Mount Royal College, but his promising career as a wrestler took over, leading to Hart’s performances for Stampede Wrestling in 1976.

Following his successful six-year stay with Stampede Wrestling, Bret Hart made the transition to the WWF as part of the Hart Foundation, along with his brother-in-law, Jim Neidhart.

In the early 1990s, Hart won his first WWF Intercontinental Championship, following this up with a win at the 1991 King of the Ring tournament.

Shortly after he became WWF champion, facing off against some of the biggest wrestlers in the industry over the following years.

Following his iconic feud with Steve Austin in the late 1990s, Hart made the move to WCW, where he became the United States Heavyweight Champion.

Hart has also appeared alongside iconic wrestlers including John Cena and Randy Orton, before limiting his activities in 2011.

Since his retirement, he continues to promote his ventures through the official Bret Hart website, as well as writing regular columns on sport, and released his autobiography in 2007.

With a career in wrestling spanning decades, Bret Hart’s earnings have increased considerably over time before declining following his career peak.

With his wrestling salaries, books, and work as a writer, Bret Hart is justly ranked as one of the richest wrestlers in the world and continues to earn royalties from DVD sales.

His net worth experienced its biggest growth during the height of his wrestling fame, with his many championship victories contributing to his fortune of millions of dollars.

Today, while his annual income isn’t on par with his peak earnings, he still draws a respectable salary for his work, and the official Bret Hart website also sells lots of merchandise for fans.

Many of Hart’s family members have enjoyed successful careers in wrestling, with fellow pro wrestling legend Roddy Piper also claiming to be one of his cousins.

Since 2002, Hart has experienced health problems that he’s discussed on his official Bret Hart Instagram account, and in 2016 he successfully beat prostate cancer.

Bret Hart has had one of the most impressive careers in wrestling history, winning multiple championships and living up to his family name.

Here are some highlights from Bret Hart’s career:

How Does Bret Hart Spend His Money?

Bret Hart’s status as a multi-millionaire allows him to enjoy a lifestyle on par with some of the richest athletes in the world, and the former wrestler has a car collection to prove it.

Hart also owns cars from the manufacturers of some of the most expensive cars in the world, including a Ferrari, Bentley, Aston Martin DB, and a Lexus.

His real estate investments are relatively modest, with Hart’s Hawaii retreat reportedly selling for $705,000 in 2015.

Bret Hart’s ongoing popularity and success as a professional wrestler have led to many high points throughout his life and career.

Here are some of the best highlights of Bret Hart’s career:

With his long career as a professional wrestler, Bret Hart has spoken on a wide range of topics in his interviews with the media.

Here are our favorite quotes from Bret Hart:

Now that you know all about Bret Hart’s net worth, let’s take a look at some of the ways his life and experiences have inspired his fans around the world.

Here are some of the best success lessons to learn from Bret Hart:

1. You Can Learn A Lot From Your Family

With his early life seeing him surrounded by wrestling legends, it was no surprise that Bret Hart became a champion wrestler in his own right.

If there’s talent in your family, you should take the time to let your family members teach you what they know.

2. Take The Time To Show Your Fans Appreciation

While some professional wrestlers are known for being cold towards fans, Hart has always found the time to be nice and engage them in conversation.

If you want to be the very best you can be, you should be prepared to put in the time and effort, as nothing in life comes without a challenge.

So there you have it, our complete guide to the life and career of pro wrestling sensation Bret Hart and how he earned his net worth.

While Hart is retired from the profession today, his entrepreneurial activities and sports writing career will continue to ensure a steady revenue stream.

With his net worth likely to fluctuate over time, we’ll be updating this article to make sure it covers all the latest details, so check back at a later date.

What do you think about Bret Hart’s net worth? Leave a comment below.