Fetty Wap, as he’s most commonly known, or Willie Maxwell is an American hip hop artist from New Jersey.

His most famous single, ‘Trap Queen‘, which is most likely responsible for his rise to fame, came out in 2014. However it didn’t start to gain traction until early 2015.

When Fetty was younger, he got into an accident and ended up with congenital glaucoma in both of his eyes. The doctor was able to save one, but he lost the other. It’s something that often gets commented on by his fans, but Fetty says he’s incredibly thankful to still have his vision.

Here’s our collection of famous and inspirational Fetty Wap quotes:

1. “I’ve always been my own person. I don’t do what people want me to do. Like, if you want me to do that, I’m going to do the complete opposite.” – Fetty Wap

2. “Once I come up with the concept, the rest of the song just comes.” – Fetty Wap

3. “My whole thing is loyalty. Loyalty over royalty; word is bond.” – Fetty Wap

4. “I don’t ever try to make a song better than my last song. I just try to make it different from my last one.” – Fetty Wap

5. “Don’t let nobody tell you that you can’t do it. Love what you do until you don’t love it anymore. Nothing’s impossible.” – Fetty Wap

6. “There’s gonna be a lot of great songs. But there ain’t going to be another trap queen.” – Fetty Wap

7. “Plans never go well for me. I just live everyday like I ain’t gonna live the next one.” – Fetty Wap

8. “If only the people around you know you’re an artist, then you’re doing something wrong.” – Fetty Wap

14. “I was always able to get money. But now it’s a little bit more money. And I manage the same way. I just want to see my family do better.” – Fetty Wap 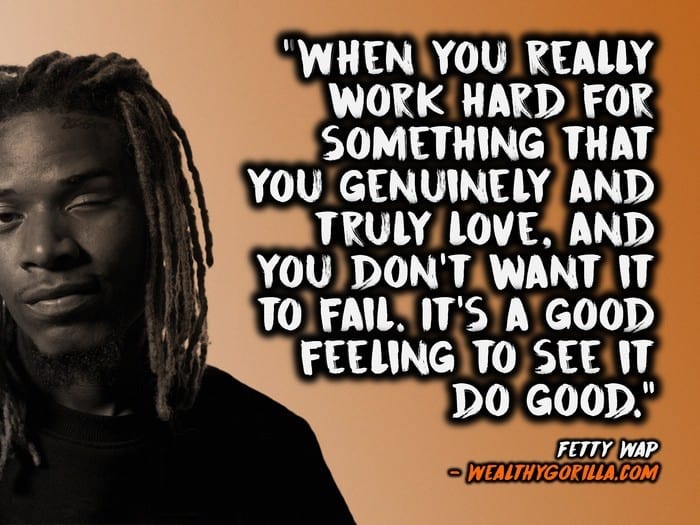 15. “When you really work hard for something that you genuinely and truly love, and you don’t want it to fail. It’s a good feeling to see it do good.” – Fetty Wap

16. “When I was little, I got into a little accident, and it gave me congenital glaucoma in both my eyes.” – Fetty Wap

17. “I’m just really waiting for the music to get cooked the right way, and once it’s cooked, I’m going to serve that meal that everybody’s been waiting for.” – Fetty Wap

19. “The best thing that happened is I kept my promises. I ain’t run out on nobody.” – Fetty Wap

20. “After the years of me trying to figure out what I wanted to do with myself, I knew I had to go back and fix some things. I can’t just be super-rich or whatever and not do the right thing.” – Fetty Wap

22. “I never really thought I was going to be a singer, honestly. I never listened to singers; I always listened to rap music.” – Fetty Wap

24. “I’m not really into the whole lyrics thing. I just like to make music that people like to listen to.” – Fetty Wap

25. “There are a lot of females that hustle, just like men hustle.” – Fetty Wap

27. “You don’t really gotta rap no more; you can just say the verse with a swag now.” – Fetty Wap

28. “It takes a lot of people hours to make music because they focus so much on one thing. I just do it, and I make something you can just vibe to.” – Fetty Wap

Thanks for viewing this collection of the best Fetty Wap quotes! Don’t forget to share them on social media.

Which are your favorite Fetty Wap quotes? Leave a comment below.