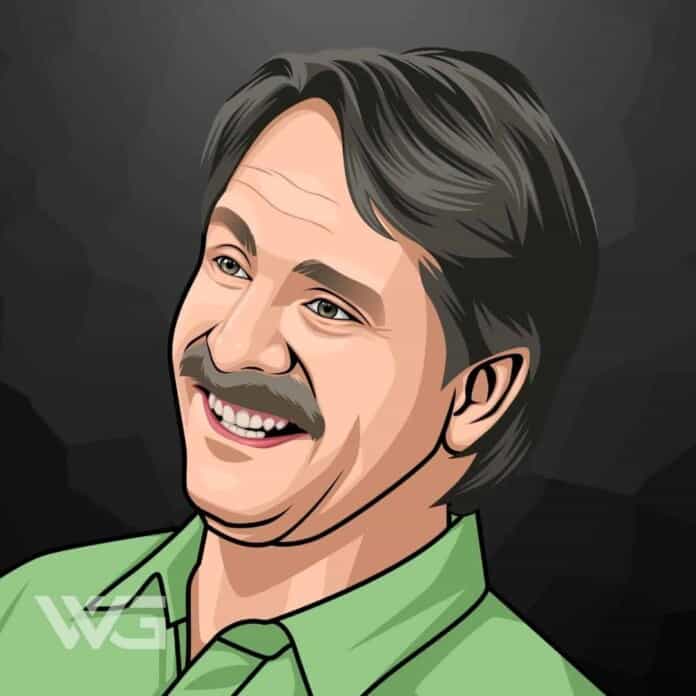 What is Jeff Foxworthy’s net worth?

As of November 2022, Jeff Foxworthy’s net worth is estimated to be $100 Million.

Jeffrey Marshall Foxworthy is an American actor, television personality, and comedian from Atlanta.

Foxworthy gained his recognition when his co-workers signed him up for a “laugh off” where he won the competition.

He pursued his stand-up comedy career after that and he has been on a comedy tour among other comedians across the whole of the U.S.

Jeff Foxworthy was born in Atlanta, Georgia on the 6th of September, 1958. He is the first child of Carol Linda and Jimmy Foxworthy. Both of his parents are of English descent. Foxworthy attended Hapeville High School.

After he graduated he worked five years in mainframe computer maintenance at IBM. After support from his co-workers, he entered the Great Southeastern “Laugh Off” comedy club where he won in 1984.

Foxworthy began his professional career at IBM where he worked in mainframe computer maintenance. He derived more pleasure from making his co-workers laugh than actually working which is why he started his career as a comedian later on.

Atlanta Punchline comedy club announced a “laugh off” in 1984; his co-workers urged him to participate. Foxworthy won the competition and decided to quit his job.

He developed a unique comedic style throughout his career that made him one of the best comedians in the industry. Foxworthy released a comedy album “You Might Be A Redneck If… in 1993 which was ranked at No. 38 on the Billboard 200 chart.

Foxworthy won awards including the People Choice Awards in 1996 and the Personality of the Year in 2001.

Foxworthy hosted a weekly radio show, The Foxworthy Countdown from 1999 to 2009. The radio show featured “Top 25 hits” and interviews with stars all over the world.

The show was really successful and ran for over ten years. He later formed a comedy troupe called Blue Collar Comedy Tour. The group traveled and performed all over the U.S, and they became hugely popular.

He released his comedy CD in 2004, which debuted at No.1 on the Billboard comedy charts and was sold all over the U.S. After traveling around for the comedy tour he created the TV series Blue Collar TV for the WB network. The show ran from 2004-2006. The popularity of the comedy tour inspired the group to release three DVD movies.

Today, Jeff Foxworthy is one of the most accomplished comedians of all time and has impressed many by his performances not only as a comedian but also as a radio host, writer, and television host.

Here are some of the best highlights of Jeff Foxworthy’s career:

“If you ever start feeling like you have the goofiest, craziest, most dysfunctional family in the world, all you have to do is go to a state fair. Because five minutes at the fair, you’ll be going, ‘you know, we’re alright. We are dang near royalty.” – Jeff Foxworthy

“You know, I remember Career Day in high school. I remember plumbers and lawyers… I don’t remember a booth where you could sign up to learn how to shoot chickens out of a cannon at the windshield of an airplane, ’cause there would have been a line at my school to do that!” – Jeff Foxworthy

“We’re all screwed up. And the way Christians mess things up is we act like we’ve got it going on. And if we would just stay in that place of, ‘Hey, we’re all screwed up and but for the grace of God, none of us have a shot here.’ We need to have a sense of humor about it; that’s kind of the way I’ve always faced my comedy.” – Jeff Foxworthy

“My wife is so analytical with raising kids, and I am not. My feeling is if they turn out good, then that means I was a good daddy and put a lot of effort into it. If they turn out bad, it means they took after her side of the family.” – Jeff Foxworthy

“The thing about that singles apartment is you never had to clean it up… until the day you got the security deposit back. You’re arguing with the landlord… ‘No sir, the back door was missing when we moved in here! The pizzas were always on the ceiling!” – Jeff Foxworthy

Now that you know all about Jeff Foxworthy’s net worth, and how he achieved success; let’s take a look at some of the lessons we can learn from him:

It’s a conscious decision to eat cereals. As soon as you pour the milk on and you will rip the roof of your mouth to shreds. Wait too long and the Cap’n will put a film on your teeth a wire brush can’t get rid of.

2. Country music stars have it so easy

If you’re a singer or songwriter you write hits that you will play until you’re 90 years old. That’s why country music stars have it so easy.

3. Laughter is the best medicine

Comedy is always the best way to make you laugh. Everyone is going through stuff, but Foxworthy really does believe that laughter is the best medicine.

How much is Jeff Foxworthy worth?

Jeff Foxworthy’s net worth is estimated to be $100 Million.

How old is Jeff Foxworthy?

How tall is Jeff Foxworthy?

Jeff Foxworthy is one of the most accomplished comedians of all time. Foxworthy had success as a stand-up comedian, radio host, television host, and writer. He has got several awards for his work as a comedian so there’s no doubt why his net worth is high.

As of November 2022, Jeff Foxworthy’s net worth is estimated to be $100 Million.

What do you think about Jeff Foxworthy’s net worth? Leave a comment below.