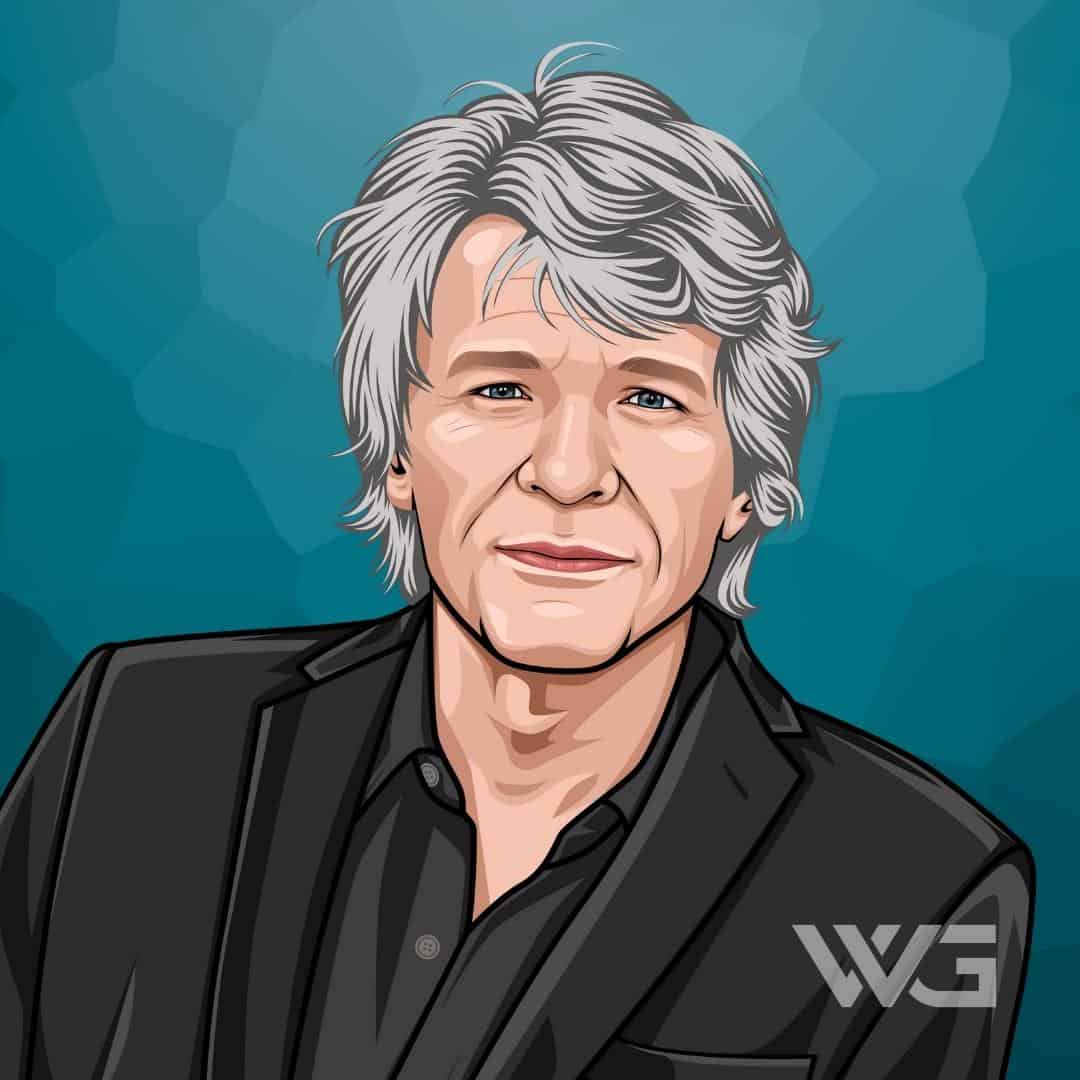 What is Jon Bon Jovi’s net worth?

Jon Bon Jovi, founder and lead singer of the American rock band Bon Jovi, is one of the most recognizable rock stars in the world.

Besides being an incredible singer, Bon Jovi is also a decorated songwriter, record producer, actor, and philanthropist who boasts a remarkable net worth gained from his talents.

Bon Jovi has two brothers, Matthew and Anthony, who he often spent time with during the summer in Erie, Pennsylvania, where his grandparents lived.

Jon Bon Jovi started playing music when he was 13, learning the piano and guitar, which he played in his first band, Raze.

At 16, he started a band called Atlantic City Expressway with David Bryan, and he continued pursuing a musical career with many smaller bands until 1983, when he met up with the founding members of Bon Jovi.

In 1983, Jon started putting together a band with David Bryan, Alec John Such, Tico Torres, and Richie Sambora, recording the single “Runaway,” which he tried to get broadcast on New York City radio stations.

While most DJs turned him away, one took a chance on him, and Bon Jovi’s song became an instant hit, prompting Mercury Records to sign the band.

In 1984 and 1985, Bon Jovi released their first two albums with moderate success, but their most successful album was their third, “Slippery When Wet,” which was released in 1986.

Their third album contained some of the band’s biggest hits, including “Wanted Dead or Alive,” “You Give Love a Bad Name,” and “Living on a Prayer,” all of which continue to be some of the best-known rock songs in the world.

With his band, Jon Bon Jovi has released 16 studio albums, five compilations, and three live albums, selling over 130 million records across the globe.

Bon Jovi has performed over 2,700 concerts in over 50 countries, regularly earning up to $150 million every tour.

As one of the richest rockstars in the world, Jon Bon Jovi has earned a lot of money throughout his career, and we have some insight into exactly how he’s become so wealthy.

What we know about Jon Bon Jovi’s career earnings includes:

Jon Bon Jovi is undoubtedly very well compensated for his musical talents, and since he is still regularly touring and putting out new music, we expect that his net worth will only continue to grow in future years.

Jon Bon Jovi married his high school sweetheart Dorthea Hurley on a secret side trip to the Graceland Wedding Chapel in Las Vegas while on his New Jersey Syndicate Tour in 1989.

Bon Jovi is highly active on his official Instagram account and often posts about his life and upcoming projects, while his official website keeps fans updated on his tours and new music.

As a close friend of Robert Kraft, the owner of one of the richest NFL Teams, the New York Patriots, Bon Jovi owns two Super Bowl rings and has performed many times at their home stadium.

As one of the wealthiest and most well-known rock stars in the world, Jon Bon Jovi has numerous awards and nominations under his belt.

Here are some highlights from Jon Bon Jovi’s career:

How Does Jon Bon Jovi Spend His Money?

Jon Bon Jovi has a lot of money, and he certainly knows how to spend it.

Fans can get a glimpse into Bon Jovi’s lavish lifestyle through the various properties he owns, many of which cost millions of dollars.

In 2013, Jon Bon Jovi listed his Manhattan duplex for $42 million, fully furnished throughout all 11 rooms.

In 2021, Bon Jovi placed his New Jersey mansion up for sale for $20 million, with the 18,000 sqft property looking more like a regal manor than a rock star’s home.

Situated on 15 acres on the banks of the Navesink River, this home features a grand fireplace, 12-ft ceilings, French balconies, and multiple brick courtyards.

There is even a loft music studio built over the seven-car garage and a pool complete with two cabanas for throwing amazing parties.

Bon Jovi recently purchased a new mansion in Palm Beach, Florida, for $43 million, with ocean views and a courtyard pool.

This new home has a three-car garage, elevators, a temperature-controlled wine cellar, and two oceanfront loggias.

Jon Bon Jovi has reached a lot of significant milestones throughout his career that have enabled him to become one of the most well-known rock stars in the world.

Here are some of the best highlights of Jon Bon Jovi’s career:

Jon Bon Jovi certainly has a way with words, and there is no shortage of great things that he’s said throughout his long career.

Here are our favorite quotes from Jon Bon Jovi:

Now that you know all about Jon Bon Jovi’s net worth, we can look at the lessons we can all learn from his impressive musical career.

Here are some of the best success lessons to learn from Jon Bon Jovi:

1. Get Back Up When You Fall Down

No matter who you are, you’re going to fail at one point or another, but it’s what you do afterward that really matters.

If you want to be successful, you need to learn how to pick yourself back up and keep going even when it feels easier to give up.

Having a plan can be essential when you are trying to become successful, but nothing is ever written in stone.

Make sure that whatever plans you have are flexible enough so that you don’t miss out on opportunities or get held back by your own game plan.

3. Give Back When You Can

Jon Bon Jovi is a huge philanthropist, and this is something that everyone can learn from.

When possible, give back to others and help out those around you if you are able.

Whether you’re volunteering your time or just paying for the car behind you at a drive-through, there are many ways you can make someone else’s day a bit brighter.

Jon Bon Jovi is the definition of a successful rock star, and he is someone who has inspired a lot of people, both inside the music industry and out.

Fortunately for fans, Bon Jovi has shown no signs of retiring anytime soon, so we can look forward to many new things from him in the future.

Be sure to check back regularly to stay up-to-date as Jon Bon Jovi’s net worth continues to increase!

What do you think about Jon Bon Jovi’s net worth? Leave a comment below.