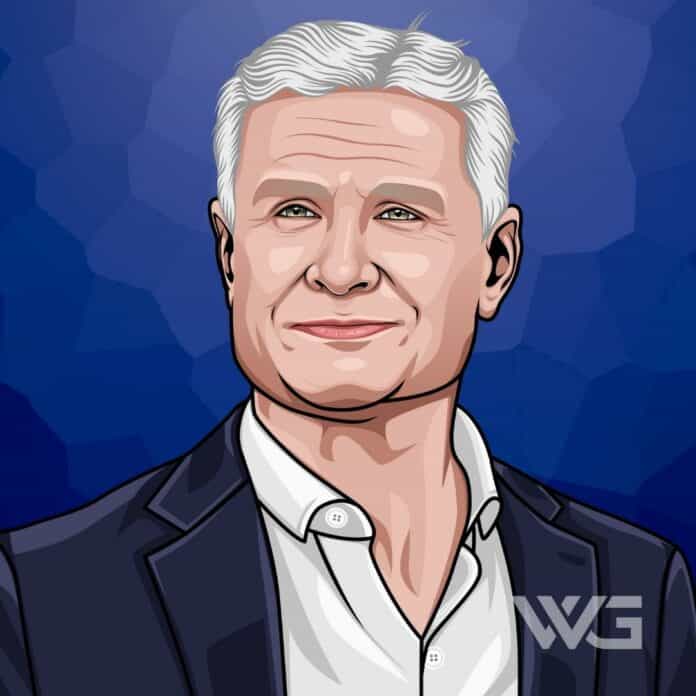 What is David Coulthard’s net worth?

David Coulthard started his racing career in 1994, and by the time he retired in 2012, he’d earned millions as one of the greatest Formula One drivers.

Working now as a commentator and journalist, Coulthard continues to grow his wealth, despite not competing as much as he used to.

As of January 2023, David Coulthard’s net worth is estimated to be $80 Million.

As a child, David grew up around racing, with his grandfather having competed in the Monte Carlo Rally and his father racing karts.

In 1989, David transitioned from karts to cars and became the first recipient of the McLaren/Autosport Young Driver of the Year award, which gave him the opportunity to test drive a McLaren Formula One car.

This kick-started his career, and in 1990, David competed in the EFDA Nations Cup, followed by the British Formula 3 series in 1991 with Paul Stewart Racing.

From 1993 to 1995, Coulthard was employed by the Williams team as he started his Formula One racing career.

In 1994, Coulthard made his debut in Spain, qualifying in eighth position but suffering an engine failure 34 laps from the finish that caused him to lose.

By 1996, Coulthard had partnered with McLaren, and though his season started poorly, he came back strong, earning a two-year contract with McLaren.

Coulthard would stay with McLaren until 2005, when Red Bull purchased the Jaguar team, prompting him to join them on a one-year deal for nearly $2 million.

For the next four years, Coulthard raced for Red Bull, qualifying numerous times before retiring from Formula One in 2008 but staying on with Red Bull as a testing and development consultant.

Alongside Formula One, Coulthard has been competing in the Race of Champions since 2004, and he is still actively racing in it today.

David Coulthard is one of the richest racing drivers in the world, and he’s earned an impressive amount of money throughout his career.

While he hasn’t shared all of his career earnings, we do know a bit about some of his most significant gains.

In addition to his salary earnings, Coulthard has also earned undisclosed amounts of money from brand endorsements for Mercedes, Heineken, Cooper Tires, and Red Bull Racing.

In May 2000, Coulthard and his then-fiancee, Heidi Wichlinski, leased a Learjet that developed engine trouble during a flight to Nice, France.

While Coulthard, Heidi, and their bodyguard Andy Matthews survived the resulting crash, the pilot and co-pilot both died on impact.

The following year, David and Heidi ended their relationship, and later, he was linked to Brazilian model Simone Abdelnour.

In 2006, Coulthard became engaged to Belgian Formula One correspondent Karen Minier and had their first son, Dayton, in 2008, before being married in 2013.

David Coulthard has won many races during his career, and his victories have earned him quite a bit of money.

While we can’t cover all of his victories, we can highlight some of his most significant ones.

Here are some of David Coulthard’s most important career victories:

Throughout his Formula One World Championship career, Coulthard won a total of 13 races between 1994 and 2008.

How Does David Coulthard Spend His Money?

David Coulthard has lived in Monaco for most of his professional career, but he also owns homes in London, Belgium, and Switzerland.

He also owns several luxury hotels in Britain, but in 2001, David Coulthard bought a hotel in Monaco’s Fontvieille, turning it into one of the most luxurious places to stay in the city.

While it wasn’t one of the most expensive hotels in the world, the Columbus boasted 181 rooms and overlooked the Mediterranean sea and the Princess Grace Rose Gardens.

While Coulthard owned the Columbus, the hotel hosted some high-profile guests, including David Beckham and his wife Victoria Beckham, Naomi Campbell, and Princess Stephanie of Monaco.

In 2010, Coulthard sold his stake in the hotel for a whopping $31.6 million, which has helped him grow his impressive car collection.

A few of the cars Coulthard owns include a Mercedes Project One, a car that costs over $2 million, a Valkyrie, a smart convertible, and a Renault 5 Turbo.

David Coulthard has enjoyed many high points throughout his racing career that have helped to boost his renown in the racing circuit.

While he’s reached a lot of important milestones, some stand out more than others for their impact on his fame and fortune.

Here are some of the best highlights of David Coulthard’s career:

Despite being officially retired, Coulthard still races in some of the largest championships, and we expect to see him continue for many more years.

David Coulthard is not only a fantastic Formula One driver, but he also has an incredible sense of humor.

While he has spoken a lot about his races in the past, he always does so in a way that makes people laugh.

Here are our favorite quotes from David Coulthard:

There are a lot of great things we can learn about success from David Coulthard.

Now that you know all about David Coulthard’s net worth, we can take a closer look at what he can teach us about achieving our own goals.

Here are some of the best success lessons to learn from David Coulthard:

1. Find Something That Motivates You

If you’re not motivated to do something, you’ll have a much harder time sticking to it.

Whether you’re motivated by a person, a future goal, or an outside hobby, having something to keep you inspired can be essential if you want to be successful.

2. Don’t Give Up, Even When It Gets Tough

When things get tough, it’s normal if your first instinct is to turn around and give up.

However, to be truly successful, you must learn to keep going even when it becomes difficult.

If you get into the habit of doing this, you’ll be able to face anything that comes your way.

3. Don’t Lose Your Sense Of Humor

The more you focus on getting the job done, the more you can start to neglect finding humor in the small things.

However, laughter can truly be the best medicine after a long day, and it can help prevent you from burning out.

David Coulthard earned a fortune as one of the best Formula One drivers in the world, and he has left a lasting legacy in the sport.

While he retired from Formula One in 2012, he has continued growing his wealth as a commentator and journalist, sometimes returning to the track as a driver when an opportunity arises.

Check back often so you don’t risk missing any updates on David Coulthard’s net worth!

As of January 2023, David Coulthard’s net worth is estimated to be $80 Million.

What do you think about David Coulthard’s net worth? Leave a comment below.