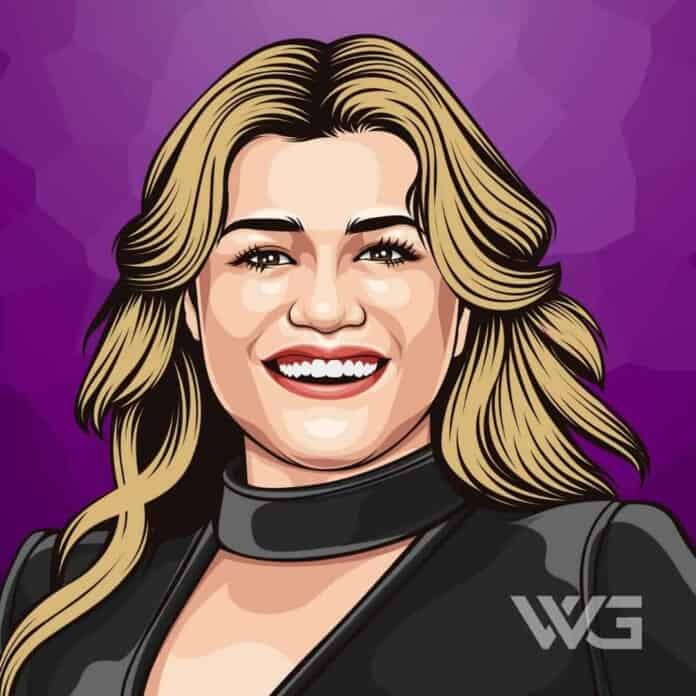 What is Kelly Clarkson’s net worth?

As of February 2023, Kelly Clarkson’s net worth is roughly $45 Million.

Kelly Clarkson is an American singer, songwriter, and television personality from Texas.

She rose to fame in 2002 after winning the inaugural season of the reality competition television series American Idol, which earned her a record deal with RCA Records.

Kelly Brianne Clarkson was born on the 24th of April 1982 in Fort Worth, Texas. Clarkson is the daughter of Jeanne Ann and Stephen Michael Clarkson.

She has an older brother Jason and an older sister Alyssa, and two stepbrothers from her father’s second marriage. She is also the youngest kid in the family. After her parents divorced, she stayed with her mom. So, she did not grow up with her siblings as her brother went to live with her father, and her sister was raised by an aunt.

Her relationship with her mom was loving and honest, which cannot be said the same about her father. Kelly’s father died in 2018, and until his last days, they couldn’t get on very good terms.

As Kelly was growing up, the church played a big part in her life. When she was in middle school, she joined a choir. This was her first experience with singing, and she fell in love with it. By the time Kelly was in high school, the young star had taken part in numerous musicals and talent shows.

Kelly was a talented girl with an excellent voice that won her several scholarships. As a matter of fact, she rejected all proposals and decided to get fully involved in her music career.

The career path Kelly went through to her fame wasn’t any bit easy. There were ups and downs, but they shaped her as we know her today: strong and fierce.

After high school, Kelly didn’t waste any time and devoted all her savings and energy to the music. She had to juggle jobs to earn enough to record her first songs. After a few recording sessions, some labels offered a contract that she later declined. She wanted to work for a prestigious label that could help her evolve within the industry.

In 2001, she decided to relocate to Los Angeles, where she recorded 5 tracks. Unfortunately, none of the labels she turned to accepted her. Los Angeles has always been an expensive city, so living without steady financial support was a challenge. Exactly for that reason, Kelly was forced to return to her hometown.

In May 2002, Kelly Clarkson learned about the upcoming talent search show, ‘American Idol: The Search for a Superstar,’ from her friends, who encouraged her to audition for it.

Her successful stint in the show earned her a million-dollar record deal from RCA Records. She debuted her music career on September 17, 2002, with the double-A-side singles “Before Your Love” and “A Moment Like This.”

In 2003, Clarkson released her debut album, ‘Thankful,’ which received positive reviews from critics. The album debuted at number one on the ‘US Billboard 200.’

With her second album, ‘Breakaway,’ which was released on November 30, 2004, she decided to break away from her ‘American Idol’ image and adopted a rock music style. The album earned her two Grammy Awards.

Following the success of her country duet ‘Don’t You Wanna Stay’ with Jason Aldean in 2010, she decided to adopt country music for her fifth studio album, ‘Stronger.’

Her seventh studio album, ‘Piece by Piece,’ tells a single story of heartbreak through its singles.

Kelly is a talented woman who has excelled in the music industry as well as in her TV and film career. The very first movie she featured in was “From Justin to Kelly,” which was released in 2003. Other notable appearances were mainly on TV shows such as “The Voice” and “Americal Idol.”

Clarkson has also tried herself as a voice actor. She dubbed the character Leah in the cartoon “The Star” and Delta Dawn in “Trolls World Tour.”

One of the latest entertainment news includes her own TV show, “The Kelly Clarkson Show.”

The TV star is truly a creative personality. The music and film industries are great, but who would have thought Kelly was good at writing, too?

Here are some of the best highlights of Kelly Clarkson’s career:

In June 2020, after 7 years of marriage, Kelly filed for divorce. The reality TV star and singer has commented on the split, saying the couple suffered from irreconcilable differences.

Kelly Clarkson filed for divorce in June 2020 and received primary child custody five months later. Brandon, in response, filed a request which demanded $430,000 in monthly child support payments. However, it was later reduced to $135,000. Apart from the hefty spousal and child support sum, the ex-husband wanted to receive a one-time payment of $2 million to cover the attorney fees.

Kelly didn’t wait long to counterattack. She claimed that Brandon had been managing her for 13 years while not holding the necessary license required to perform his job. She demanded millions in return for unlawful practice.

In April 2021, the judge ordered Kelly Clarkson to pay her former husband $195,000 per month in child and spousal support. And in January 2022, she had to give up a 5% stake of her Montana ranch to Brandon. At that time, the Montana ranch was valued at a shocking $17.75 million, and 5% equaled almost a million.

Overall, their divorce was tough for both sides. It was finalized in March 2022. Kelly Clarkson received custody of their two children and kept most of her assets. Apart from child and spousal support, she also had to pay a one-time sum of $1.3 million to her ex-husband.

Kelly Clarson’s net worth has been growing since the beginning of her career. But the breaking point was when she joined “The Voice” as a coach. She was receiving $560,000 per episode. This is $14 million per entire season. She earned a million less for previous seasons. So, for four seasons that she participated in, Clarkson accumulated about $53 million.

Together with the commission from her records, Kelly Clarkson acquired about $100 million throughout her entire career.

“The question I love to get asked is: ‘What’s the hardest part of your job?’ And literally, the answer is probably really sad, but it’s to just to be me. Like, it’s really hard, because I think people, you know, have a set idea of what a pop star should be.” – Kelly Clarkson

“I’ve got a song on One Direction’s album called ‘Tell Me A Lie’. It’s a really cute song – I love it. I loved that they liked it. They sound really great on it. I already have it – I’m so VIP with my copy on my computer! It does sound really good.” – Kelly Clarkson

“I’m cute – and God I hate that. Because that’s not cool. I’m like your niece, and nobody wants to date their niece. It’s the chubby cheeks. The whole reason people voted for me on American Idol is that I’m an everyday, normal girl.” – Kelly Clarkson

“I would not be a good mother. I mean, I love being an aunt to my niece and nephew. And I used to want to, like, adopt 10 kids – because I had friends who were adopted, and I thought that was the coolest thing, to be chosen. But again, my job is too selfish.” – Kelly Clarkson

“I sound the same regardless if I’m 20 pounds heavier or 20 pounds lighter, and I think that’s the key thing with my fans and why they continue to be loyal because I’m that type of person.” – Kelly Clarkson

Now that you know all about Kelly Clarkson’s net worth, and how she achieved success; let’s take a look at some of the lessons we can learn from her:

1. Letting Go of Things Not Meant for You Is Sweet Freedom

Liking the idea of someone more than you like the actual person is dissatisfying for both of you. When you let go of the person, it opens you up to the availability of what you truly want.

I’m pretty sure it’s Buddhism, or a law of the universe, or just Kelly’s way of telling us not to be held down by settling for someone who doesn’t treat you well.

2. Your Name Being Screamed as a Curse Word Can Be Hilarious

Steve Carell is everyone’s favorite 40-Year-Old Virgin. During this classic scene, he ad-libbed his outbursts while his chest was waxed. Words with hard consonant sounds being screamed in a pain response let you know someone is really feeling it.

3. Not Fitting in Can Push You to Your Destiny

Kelly grew up in Burleson, Texas. She knew she wouldn’t be able to follow her musical dreams there, but leaving everything she knew was scary. Taking the risk of leaving to audition for American Idol changed the trajectory of her life, but she still remembers where she comes from.

How much is Kelly Clarkson’s net worth?

Kelly Clarkson’s net worth is estimated to be $45 Million.

How old is Kelly Clarkson?

How tall is Kelly Clarkson?

Kelly Clarkson is one of the most successful artists to come out of the ‘American Idol’ series. As she achieved success, she experimented with different themes and music styles, became a TV personality and a pop culture icon . Clarkson has won the Grammy Award three times.

As of February 2023, Kelly Clarkson’s net worth is estimated to be roughly $45 Million.

What do you think about Kelly Clarkson’s net worth? Leave a comment below.