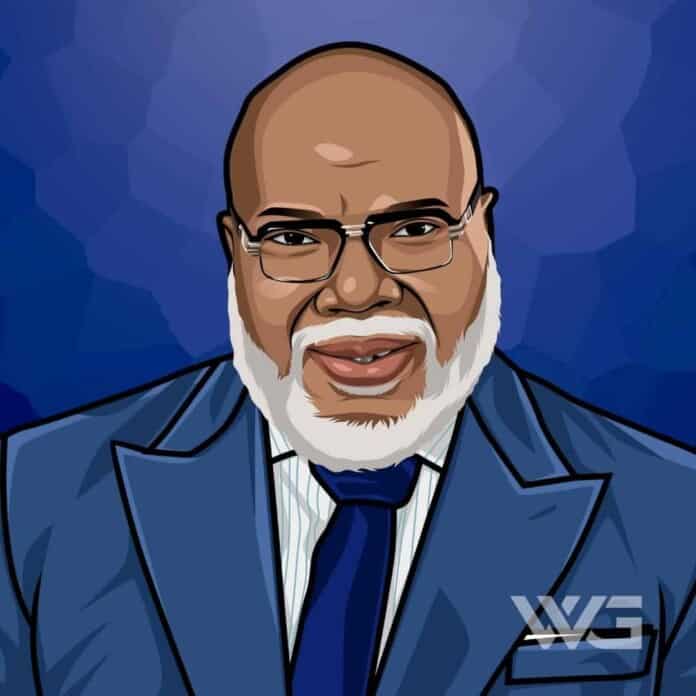 What is T.D. Jakes’ net worth?

T.D Jakes is an American bishop, author, and filmmaker.

Jakes is the Bishop of the Potter’s House, which is a non-denominational megachurch. He hosted ‘T.D. Jakes Show’ a syndicated talk show distributed by Sony Pictures Television until the shoe’s cancellation in 2017.

Jakes was raised as a Baptist, and the Apostolic church gave him a sense of purpose to preach. He attended West Virginia State University and studied psychology, though he later earned a master’s and a doctorate in the ministry.

In 1981, Jakes became the pastor of Greater Emanuel Temple of Faith.

A few years later, he joined the Christian denomination Higher Ground Always Abounding Assemblies. Jakes moved to South Charleston, West Virginia, where his congregation grew up to 300 members in 1990.

He began to move into the world of publishing in 1995 and founded the firm TDJ Enterprises. The company published his books. From 1995 to 1996, he served as the host of his own weekly radio and television show ‘Get Ready’. His own show ‘T.D. Jakes’ was launched in partnership with Tegna, Inc, and Debmar-Mercury in 2015.

In 1996, he moved to Texas and founded the non-denominational church The Potter’s House. It comes with a 34-acre hilltop campus with a 5,000 seat auditorium.

In addition to his work as a bishop, he has also worked as a film producer. His filmography includes ‘Woman Thou Art Loosed,’ ‘Not Easily Broken,’ ‘Jumping the Broom,’ Munya,’ ‘Sparkle,’ ‘Heaven Is for Real,’ ‘Winnie Mandela,’ ‘Miracles from Heaven’ and ‘Faith Under Fire’.

Jakes has published numerous books. Some of the titles he has written include ‘Woman Thou Art Loosed: Healing the Wounds of the Past,’ ‘So You Call Yourself a Man?’, ‘He-Motions,’ ‘Reposition Yourself: Living Life Without Limits,’ and Let it Go: Forgive So You Can Be Forgiven’.

Throughout his career, he has received numerous honors, including 12 honorary degrees. He has also received G>rammy and Dove Award nomination for his gospel album ‘Live from The Potter’s House’.

How Does T.D. Jakes Spend His Money?

T.D. Jakes is a wealthy man, and he spends his fortune on his expensive mansion, cars, and jewelry.

T.D. AJkes owns a massive 14,045 square foot slice of heaven in Fort Worth. He purchased the mansion for $5.5 million in December 2004. The estate features 4 bedrooms, 7 bathrooms and sits on 17.8 acres of land. Amenities include a wet bar, a 7-car garage, and a swimming pool.

Jakes has a huge collection of cars. Some of his most notable purchases include a Rolls Royce Phantom, and a 1960 Trans-Am.

Jakes owns plenty of expensive jewelry. He is known for his diamond ring that he often has been seen wearing daily.

Here are some of the best highlights of T.D. Jakes’ career:

“I wasn’t trying to be rich or famous. Was trying to figure out what is this thing in me that won’t let me sleep that makes me restless and makes me keep pushing. I was trying to discover who I was.” – T.D. Jakes

“You don’t have to be in church service to worship, you can be in your own home. You enhance your spirituality, through the instrument of worship, when you really connect with the invisible, almighty God.” – T.D. Jakes

“A whole woman will always attract a whole man. And when they touch, they will fuse to create a whole marriage. Ultimately, when the time is right, they will produce whole children.” – T.D. Jakes

“Stress and worry is a residual of relying on yourself and being your own god, in control of everything. Worship allows us to rely on God’s power to steer us through life.” – T.D. Jakes

“A lot of can’t deal with life because they lack the patience to become who they want to be…. Everything happens by process. If you don’t go through the process to get it, you don’t have the power to keep it.” – T.D. Jakes

Now that you know all about T.D. Jakes’ net worth and how he achieved success; let’s take a look at some of the lessons we can learn from him:

You must realize that if you are going to reach the heights you have been called to reach, you may elicit some criticism from those who are jealous, petty, or angry because they were left behind.

Some of the best people with whom you can have a relationship are the people who challenge your thinking.

You cannot change what you will not confront.

You cannot embrace your destiny if you do not let go of your history.

How much is T.D. Jakes worth?

T.D Jakes is an American bishop and author. He was known in his community as “the Bible Boy”. Jakes had his first sermon in 1976.

Jakes is probably best known for establishing the Temple of Faith Church in Montgomery, West Virginia. He worked simultaneously at the Union Carbide to keep his ministry afloat.

What do you think about T.D. Jakes’ net worth? Leave a comment below.