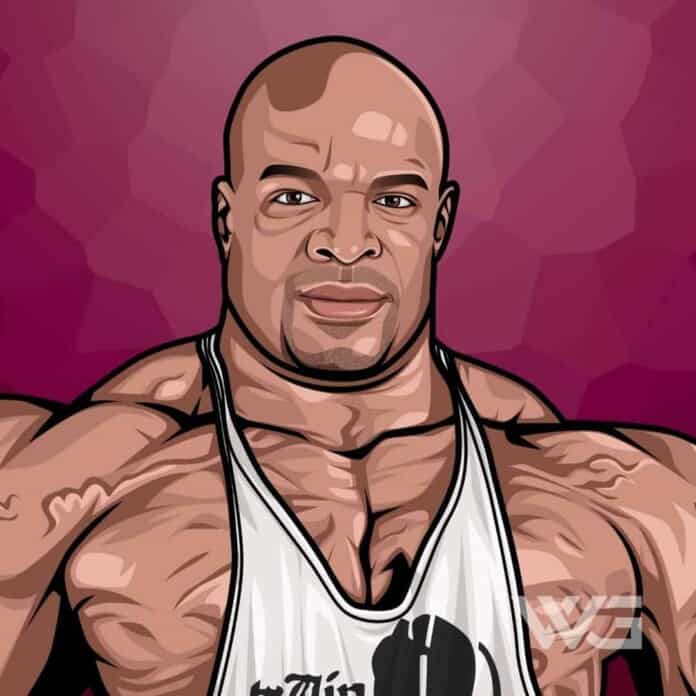 What is Ronnie Coleman’s net worth?

Coleman has been the winner of the Mr. Olympia title for eight years in a row. He is regarded as one of the greatest bodybuilders of all time.

Alongside his eight Mr. Olympia wins, he held the record for most wins as an IFBB professional with 26 titles.

In 1984, Coleman graduated from Grambling State University. He played football as a middle linebacker with the GSY Tigers under coach Eddie Robinson.

After graduation, Coleman failed to find work as an accountant and instead went to work at Domino’s Pizza. He then became a police officer in Arlington, Texas. Coleman served as an officer from 1989 to 2000 and a reserve officer until 2003.

Coleman’s fellow officer Gustavo Arlotta suggested that he should attend Metroflex gym owned by bodybuilder Brian Dobson. He was offered a free lifetime membership if he allowed Dobson to train him for the upcoming Mr. Texas bodybuilding competition.

His success as a professional bodybuilder has led to many product endorsements and other opportunities in his career. He has traveled the world to promote.

Coleman supports the Inner-City Games. He was the recipient of the 2001 Admiral in the Texas Navy Certificate Award. In 2011, he launched Ronnie Coleman Signature Series, a company that provides sports nutrition and wellness products for bodybuilders and other athletes.

The extreme weights he used over the course of his career competing as a powerlifter and bodybuilder, such as deadlifts with 800 lbs, took a toll on his body. He has undergone numerous surgeries since 2007.

In 2018, Vlad Yudin documented Coleman’s life and career in the Netflix documentary ‘Ronnie Coleman: The King.’ For the documentary’s credits, rapper Quan made a song called ‘Flexin on Them (Ronnie Coleman) inspired by his bodybuilding career.

How Does Ronnie Coleman Spend His Money?

Ronnie Coleman spends some of his money on his expensive gym and on lavish cars.

Coleman owns an incredible gym worth $200,000. Since workout it’s a big part of his life, he likes to focus on having a massive, expensive gym.

Coleman has some impressive cars in his car collection. These cars include a Rolls Royce Ghost, a Cadillac Escalade, a Hummer H1, a Mercedez Benz S55, and a BMW 5 Series.

Here are some of the best highlights of Ronnie Coleman’s career:

“It seems that every day, a new brand is popping up, and everyone has become an expert on supplements and training. Hey, there’s a lot of great brands and products out there, but there are also those just looking to grab a piece of the money pie.” – Ronnie Coleman

“Get proper training right from the beginning. It prevents injuries and avoids wasting your time with misdirected effort, which is what most people generally don’t understand. Give it you’re all from day one.” – Ronnie Coleman

“The treatment from the Arnold Classic to the Olympia is, of course, a little bit different, but overall the quality of the shows and the way they are put on… I think they are the same. It’s just that the Olympia has been around for so long, and it is considered the Super Bowl of bodybuilding.” – Ronnie Coleman

“Mostly, I was into powerlifting when I was in high school. And I just continued to train the same way I was taught – to power lift. Once I started doing bodybuilding, there were no real differences, just different exercises. A different way of training with more repetitions, but it was still the same lifting of weighty weights to get stronger.” – Ronnie Coleman

“Because the Arnold Classic is such a big show, a guy who hasn’t been getting a lot of recognition all of a sudden does that show and arrives in good condition and can take out some of the top guys, it then puts him up there in the running for the Olympia title. So he can get more recognition that way.” – Ronnie Coleman

“As my athletic career was coming to an end in 2007, I asked myself, do I want to work for somebody, or go out and make a difference?” – Ronnie Coleman

Now that you know all about Ronnie Coleman’s net worth and how he achieved success; let’s take a look at some of the lessons we can learn from him:

Hard work and training. There’s no secret formula. Coleman lift heavy, work hard,, and aim to be the best.

3. Do What You Always Done

Never underestimate the power of wide-grip pull-ups to develop width and size.

How much is Ronnie Coleman worth?

Ronnie Coleman’s net worth is estimated to be $2 Million.

How old is Ronnie Coleman?

How tall is Ronnie Coleman?

Coleman was born in Bastrop, Louisiana. He played football at Grambling State University. Coleman was trained and given a free lifetime gym membership by Brian Dobson.

He won 1st place in the heavyweight and overall categories. In 1995 and 1996, Coleman won his first professional competition. He has also had nay endorsement deals.

What do you think about Ronnie Coleman’s net worth? Leave a comment below.