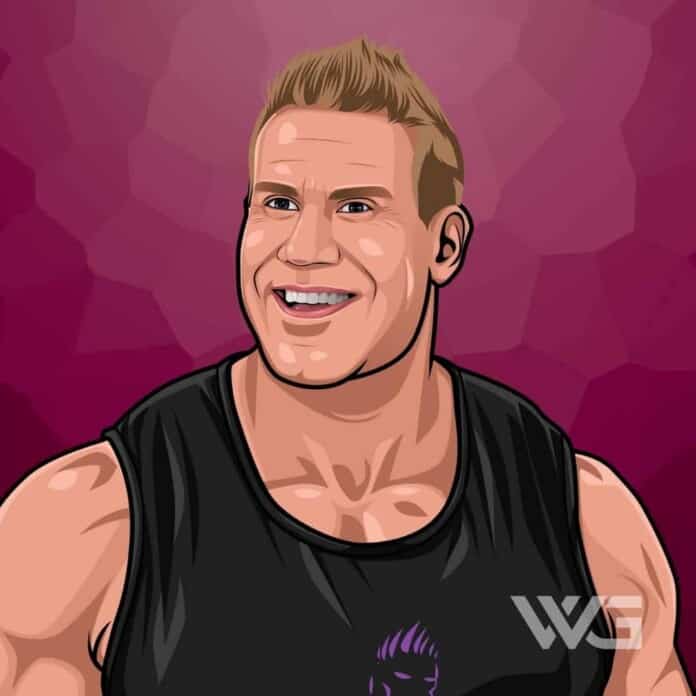 What is Jay Cutler’s net worth?

Cutler is a four-time Mr. Olympia winner. Before he became a professional bodybuilder, he worked in his family’s concrete construction business. He began training when he was 18 years old as a senior at Wachusett Regional High School.

As of December 2022, Jay Cutler’s net worth is estimated to be roughly $30 Million.

Jason Isaac Cutler was born on the 3rd of August, 1973, in Massachusetts.

Cutler grew up nearby Sterling, and he attended Wachusett Regional High School in Holden.

Cutler started to work in his brother’s concrete construction business when he was 11 years old. He started to train to become a bodybuilder when he turned 18 years old. He graduated from Quinsigamond Community College in 1993.

Cutler was inspired to start with bodybuilding, and he began training with Marcos Rodriguez. His first contest was the 1992 Gold’s Gym Worcester Bodybuilding Championships, where he came second place.

He won Arnold Classic titles in 2002, 2003, and 2004 and placed second to Ronnie Coleman in the Mr. Olympia competition for times before claiming the title in 2006.

Cutler won the Olympia for a second consecutive year in 2007. He became the third Mr. Olympia in history to win the title in non-consecutive years after defeating Dexter Jackson in 2009.

The following year, he won his 4th Mr. Olympia, defeating Phil Heath. He was runner-up to Heath at Mr. Olympia in 2011. He has been featured in several fitness magazines such as Flex, Muscular Development, and Muscle and Fitness throughout his career.

Cutler has not been competing since 2013 and has instead focused on Cutler Nutrition, his own bodybuilding supplement business.

How Does Jay Cutler Spend His Money?

Jay Cutler is a wealthy man, and throughout his career, he has earned his massive fortune from different endorsements and his own supplement bodybuilding company.

Cutler owns an incredible home in Nevada. He purchased the home in 2007 for $1.57 million. The home comes with 3 bedrooms and 5,5 bathrooms.

Cutler has some nice cars in his collection. Some of his most notable cars include a convertible Mercedes and a Turbo Porsche.

Here are some of the best highlights of Jay Cutler’s career:

“You learn from mistakes, I’ve failed at so many things and that’s how I’ve become successful, because I know the mistakes, and you have to make those mistakes before you learn.” – Jay Cutler

“This is a career, and if you go at it full tilt all the time, you are going to burn yourself out, so you have to set a certain pace for yourself to the point where you are continuously moving forward and being great.” – Jay Cutler

“When my pro career began, I never planned on being Mr. Olympia. I took steps to get there, and then ’01 came along [he was a close second in the 2001 Mr. Olympia], and I was like, okay, this is at my fingertips, right? I realized that I wanted to set a legacy of success, and that was a success in all areas.” – Jay Cutler

“Bodybuilding needs a superstar or superstars. And it’s still questionable who’s the greatest bodybuilder on the planet right now, especially after an Olympia like this one where the top guys weren’t in it. You don’t have to be Mr. Olympia to be the superstar of the sport, and I think I was a little proof of that because before I was Mr. Olympia I was pretty damn popular. And I was winning Arnolds. I was winning other shows.” – Jay Cutler

“I feel like I’ve grown a lot as a person. I’m a better-rounded person, just because I’m less focused on that one goal of winning the Olympia every year. I’m much more vocal. I can speak freely. I’m more giving, and I think I have a lot more to give because I’ve done a lot of introspection on my career and my life.” – Jay Cutler

Now that you know all about Jay Cutler’s net worth, and how he achieved success; let’s take a look at some of the lessons we can learn from him:

Without self-discipline, success is impossible, PERIOD.  You have to teach yourself how to work on your self-discipline because it’s your mind that will make choices at the end of the day.

It’s consistency. Stay with it. You have to do this day in, day out. It becomes a lifestyle.

Set your goals high, and don’t stop till you get there.

Surround yourself with people who dream BIGGER than you do.

How much is Jay Cutler worth?

Jay Cutler’s net worth is estimated to be $30 Million.

How old is Jay Cutler?

How tall is Jay Cutler?

Jay Cutler is known for knowing the value of hard work. Cutler started to work as a construction worker when he was 11 years old and when he was 18 he began to win numerous competitions as a professional bodybuilder.

He left the sport as a legend and he has won Mr. Olympia four times. He is one of the greatest bodybuilders of all time.

As of December 2022, Jay Cutler’s net worth is estimated to be roughly $30 Million.

What do you think about Jay Cutler’s net worth? Leave a comment below.