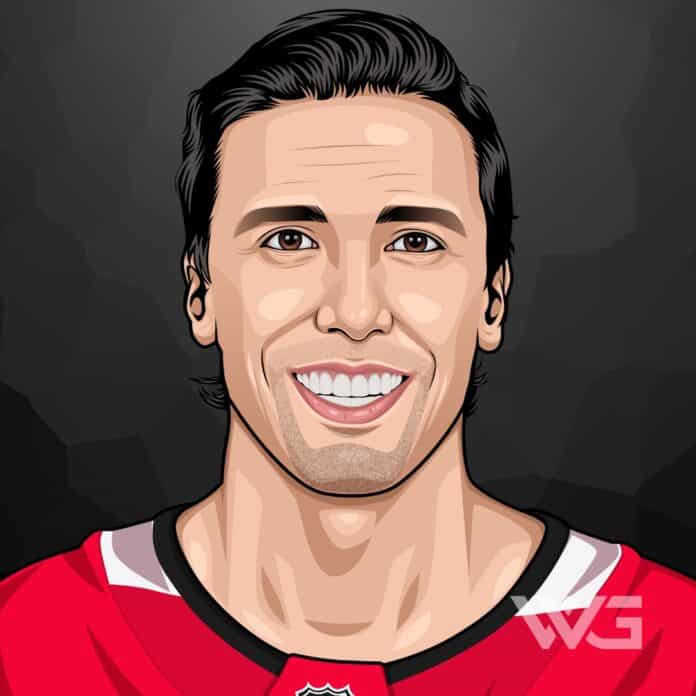 What is Marc-Andre Fleury’s net worth?

Marc-Andre Fleury is a Canadian professional ice hockey player currently serving as the goaltender for the Minnesota Wild.

During his time with the NHL, Fleury has earned a fortune, and his wealth continues to increase with each passing season.

As of December 2022, Marc-Andre Fleury’s net worth is estimated to be $50 Million.

As a child, he would often pretend to play hockey with his younger sister Marylene, and once he was old enough, he joined the College-Francais Rive-Sud minor ice hockey team.

With this team, Fleury played in the 1998 Quebec International Pee-Wee Hockey Tournament before joining the Quebec Major Junior Hockey League with the Cape Breton Screaming Eagles.

In 2002, he won a silver medal with Team Canada at the World Junior Championships, and his performance led to him becoming the first-overall pick for the Pittsburgh Penguins in the 2003 NHL entry draft.

Marc-Andre Fleury started his NHL career with the Pittsburgh Penguins in 2003 and remained with them until 2017.

During his first season, he earned Rookie of the Month honors and was named the Telus Cup Defensive Player of the Year.

Fleury made a name for himself with the Pittsburgh Penguins, and in 2009 won his first Stanley Cup as their goaltender, which he followed up with subsequent Cup wins in 2016 and 2017.

Despite his long career with the Pittsburgh Penguins, Fleury was ultimately traded to the Vegas Golden Knights in 2017 after winning his third Stanley Cup.

With the Vegas Golden Knights, Fleury earned his 400th career win and made it to the 2018 Stanley Cup playoffs, though his team was defeated by the Los Angeles Kings.

In 2021, the Vegas Golden Knights traded Fleury to the Chicago Blackhawks, though he was never informed in person about the trade and instead learned about it on Twitter.

Although he contemplated retiring, while he was with the Blackhawks, he earned his 500th win and became the first goaltender in NHL history to beat all 32 official teams in a victory against the Golden Knights in 2022.

At the end of the season, Fleury was once again traded, this time to the Minnesota Wild, where he remains on a two-year, $7 million contract.

Having become one of the richest hockey players in the world, Marc-Andre Fleury has earned an impressive amount of money during his 19-year NHL career.

Despite not being one of the highest-earning players on the ice, Fleury has certainly secured some high-paying contracts.

Although his annual salary has dropped in recent years, there is a chance it will rebound if he continues playing, making it possible for him to surpass Sam Bradford in wealth.

Marc-Andre Fleury married his longtime girlfriend Veronique in 2012, and together they have two daughters, Scarlett and Estelle, and a son, James.

Although he doesn’t share much about his personal life, his wife has written about him, his career, and the impact it has had on their family in an official publication for the NHL, which tells his story from her perspective.

Fans who want to stay updated on his current career can visit his official NHL page, which details his games, stats, and breaking news.

During his time with the NHL, Marc-Andre Fleury has earned numerous awards for his talents.

While all of his accolades are noteworthy, some have been more important than others.

Here are some of Marc-Andre Fleury’s best career awards:

He may not be as decorated as Wayne Gretzky, but Marc-Andre Fleury has earned a remarkable number of awards for his skills on the ice.

How Does Marc-Andre Fleury Spend His Money?

Although Marc-Andre Fleury likes to keep his purchases on the down-low, fans were given a taste of his luxurious lifestyle when he put his Vegas mansion on the market in 2021.

Originally purchased in 2019 for $5.5 million, Fleury was able to sell his desert oasis for $8 million, making himself a tidy profit that could allow him to easily buy a few of the most expensive Lamborghinis in the world to park at his new home.

This home is stunning, to say the least, with five bedrooms, an open gourmet kitchen, a formal dining area, a large home office, and a private den,

The backyard comes complete with a pool, a built-in fire pit, a custom barbeque, a spa, a casita, and two separate verandas.

While we don’t have any info on his newest home, if it’s anything like this one, it could rival some of the most expensive houses in the world easily.

Marc-Andre Fleury has enjoyed an impressively successful career filled with many unforgettable moments.

However, some milestones have been more significant than others in their impact on his career.

Here are some of the best highlights of Marc-Andre Fleury’s career:

Marc-Andre Fleury has proved time and time again how valuable he is as a player, and these highlights are just the tip of the iceberg in terms of his accomplishments.

During his career with the NHL, Marc-Andre Fleury has proven himself to be humble, down-to-earth, and surprisingly poetic.

You don’t have to be a fan of his to appreciate his dedication to the sport and to his team.

Here are our favorite quotes from Marc-Andre Fleury:

There is a lot that we can learn about from Marc-Andre and his long career in the NHL.

Now that you know all about Marc-Andre Fleury’s net worth, we can take a closer look at what he can teach us about reaching our own goals.

Here are some of the best success lessons to learn from Marc-Andre Fleury:

1. Don’t Burden Yourself With Worry

If you spend too much time worrying, you risk falling behind on your goals instead of making progress.

You can always make plans for things that concern you, but other than that, it’s best to just keep moving forward.

2. Celebrate All Of Your Victories

No matter how small, it is important to celebrate your victories as a way of keeping yourself motivated.

If you take time to reward yourself for small triumphs, you’ll be much more likely to keep moving forward.

3. Move On From Losses

You win some, you lose some, but if you don’t learn how to move on from loss, it can drag you down.

When faced with failure, take a moment to learn what you can from it and then use it as motivation to work even harder in the future.

Marc-Andre Fleury has made a name for himself as a talented goaltender in the NHL, and he’s earned millions for his efforts.

Despite having played for 19 years, Fleury is still going strong, and he’s not mentioned retiring anytime soon.

Make sure to check back often so that you won’t miss any updates to Marc-Andre Fleury’s wealth.

As of December 2022, Marc-Andre Fleury’s net worth is estimated to be $50 Million.

What do you think about Marc-Andre Fleury’s net worth? Leave a comment below.