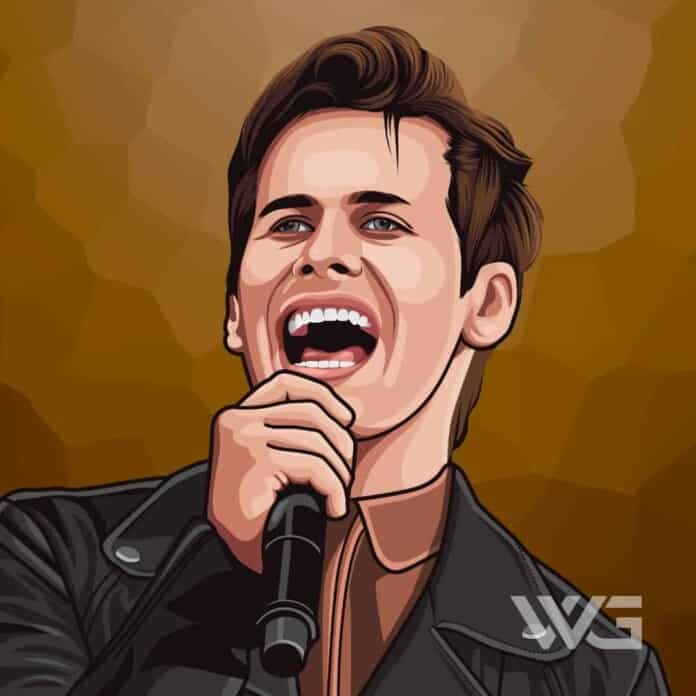 What is Mark Foster’s net worth?

Mark Foster is an American singer and songwriter.

Foster is best known as the lead singer of the band Foster, the People. In 2009, he has his big breakthrough as one of the co-founders of Foster the People. Some of the band’s most notable albums include ‘Torches, ‘Supermodel’ and ‘Sacred Hearts Club’.

As of December 2022, Mark Foster’s net worth is estimated to be roughly $10 Million.

Mark Derek Foster was born on the 29th of February, 1984, in California. When he was younger, he participated in the Cleveland Orchestra Children’s Chours, where he played the guitar, piano, and drums.

When he was a teenager, he played in garage bands. Foster had his first gig in 2001, and the following year he graduated from Nordonia High School in Ohio.

In 2002, Foster moved to Los Angeles to pursue his musical dream. He didn’t achieve much success, but at the age of 22, he got the chance to work with Aftermath Entertainment. In 2008, he landed a job as a jingle writer for Mophonics.

Foster recorded and dropped his solo album ‘Solo Songs’ the following year. The album included demo versions of the two tracks from the ‘Torches’ album titled ‘Don’t Stop’ and ‘I Would Do Anything for You.’

The same year, he worked with friends Jacob Fink and Mark Pontius to form the band Foster, the People. Their first single ‘Pumped Up Kicks’ is one of their most famous songs.

In 2010, the band signed a multi-album deal with Startime International, and they dropped a self-titled EP in 2011. The EP featured the track ‘Pumped Up Kicks’, which was nominated for the Grammy Award.

Foster and his band friends released their debut studio album titled ‘Torches’ in 2011. The album was a huge hit, and he earned his second Grammy Award nomination.

In 2014, Foster and the People released their second album ‘Supermodel’ which became their highest-peaking album on the Billboard 200. The following year, Foster announced that he produced the soundtrack for the movie ‘Little Boy.’

How Does Mark Foster Spend His Money?

Mark Foster is a young musician who is already a wealthy musician. What we know about his spending is that he likes to put money on real estate.

Foster purchased a $2.155 million property in Hollywood Hills in 2013. It comes with three bedrooms, three bathrooms, a sunroom, a music lounge, and a well-equipped kitchen.

Foster loves to travel, and he likes to spend money on going to different destinations around the world. He has said that he likes to travel frequently because of the break from the special treatment in America for being a famous singer.

Here are some of the best highlights of Mark Foster’s career:

“One of the things with the second record, a word I held close to my chest, was ‘brave.’ To take chances to go outside the box and explore. To continue to toss off any expectation that our fans or anyone else might have of us, to tap into who I am as a writer and artist and really just operate within that freedom of creation.” – Mark Foster

“I look at bands like the Beach Boys, Hall & Oates and Blur, and those are the bands I want to be in company with because their songwriting is intelligent, and yet you don’t need to be a musical genius to pick it up.” – Mark Foster

“In Morocco, a Muslim country, I got to hear the call to prayer five times a day. At first, it felt scary and dangerous because of the propaganda towards anything Muslim in the U.S. subconsciously coming out in me. By the end of the trip, it was so beautiful, and then not hearing it when I got back to L.A. really threw me off.” – Mark Foster

“The jingles saved my life. When I got hired to do that, I was on top. I finally was making a living doing what I loved. Before that, it was so bleak; it got so dark in L.A.” – Mark Foster

“Culturally, it’s amusing to me that people respect the weird guy as an artist. There can be a curmudgeon in the corner with spiders building nests in his hair, and he hasn’t bathed for three weeks, but for whatever reason, he’s more creative than the guy sitting next to him that’s showered and is talking to everybody.” – Mark Foster

Now that you know all about Mark Foster’s net worth and how he achieved success; let’s take a look at some of the lessons we can learn from him:

When you’re underwater with goggles on, a couple of your senses are taken away, and it becomes this purely visual thing. It’s just you and yourself.

We need to do a better job of loving each other beyond race, beyond belief, beyond our difference.

Art is observing society around you, representing it through your eyes.

How much is Mark Foster worth?

Mark Foster’s net worth is estimated to be $10 Million.

How old is Mark Foster?

How tall is Mark Foster?

Mark Foster is best known for being the co-founder of the indie-pop band ‘Foster the People’ in 2009.

Their music has sold millions of copies worldwide, and they have been nominated several times for big awards such as Grammy Awards. Foster the People’s album ‘Sacred Hearts Club’ was released in 2017 and reached the 8th spot on the US Alternative chart. Their track ‘Pumped Up Kicks’ is probably one of their most popular songs.

As of December 2022, Mark Foster’s net worth is estimated to be roughly $10 Million.

What do you think about Mark Foster’s net worth? Leave a comment below.