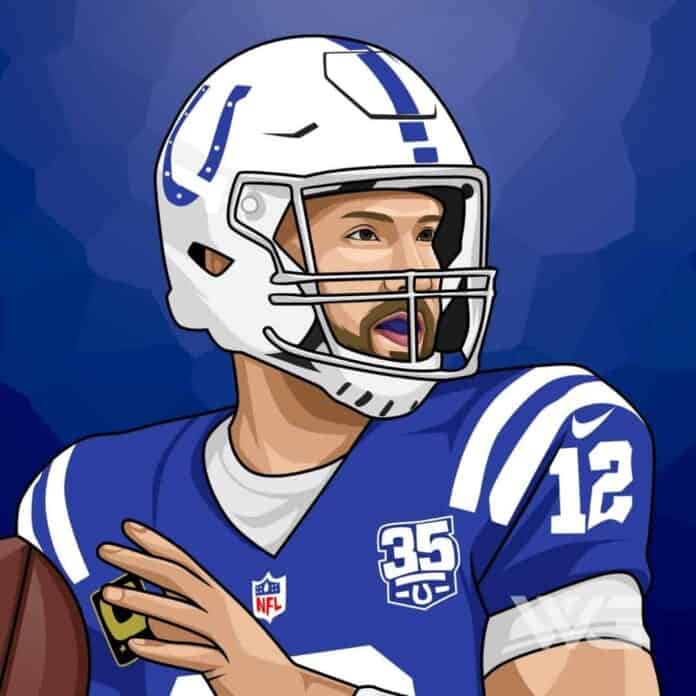 What is Andrew Luck’s net worth?

Andrew Luck is a former American football quarterback who played all seven years of his professional career with the Indianapolis Colts of the NFL.

Luck played college football for the Stanford Cardinal, where he won the Maxwell Award and Walter Camp Award.

Andrew Austen Luck was born on the 12th of September, 1989, in Washington DC. His father, Oliver Luck, is a former ‘Houston Oilers’ and ‘West Virginia University’ quarterback.

Luck is the oldest of four children, including sisters Mary Ellen and Emily and brother Addison. In London, Andrew attended The American School in London.

In 2010, he was named the ‘Orange Bowl Most Valuable Player’ as ‘Stanford’ won 40–12 over ‘Virginia Tech,’ with Luck throwing 4 touchdown passes.

The following year, he boosted ‘Stanford’s’ ranking to number seven and secured a berth in the ‘Fiesta Bowl.’ He was the fourth player to be a ‘Heisman Trophy’ finalist for two consecutive years.

During the 2012 season, he scored the highest number of wins (eight) by a rookie quarterback drafted first overall, in the ‘NFL’ history.

In the 2014 season, he was named the ‘AFC Offensive Player of the Week’ for his performance against the ‘Jacksonville Jaguars.’ This was the third time he won the award.

Here are some of the best highlights of Andrew Luck’s career:

“I’m a big sleep guy. I think my schedule sorta starts with sleep and making sure I get enough of it. I’m an eight-plus hours guy. I would love to sleep more. I definitely try to create a routine and not stray from that routine at all, but I will take advantage of having an off-morning. And I really have become a fan of the 20-minute catnap.” – Andrew Luck

“To me, breakfast is my most important meal. It’s often the meal you play a game on. I make sure I have oatmeal, milk, and fruit. It’s the fuel you use to hopefully do your best, so eating right is a big part of being a professional athlete. I wish I paid more attention to it earlier in my life.” – Andrew Luck

“The sweetest thing we ever had was, like, animal crackers in the pantry. I think my parents sort of passively made sure that we didn’t have a lot of junk food at our disposal, and I think that helped me and all my siblings growing up with how to approach nutrition and eating right.” – Andrew Luck

“When I grew up, my father taught us the value of hard work. He wanted us to enjoy ourselves, but he also wanted to know what it took to be successful. He coached a lot of our sports teams growing up. We weren’t very good, but we learned about hard work and enjoying life and your teammates.” – Andrew Luck

Now that you know all about Andrew Luck’s net worth, and how he achieved success; let’s take a look at some of the lessons we can learn from him:

1. Sometimes You Have To Move Forward

You get to walk away from unhealthy things — friendships, relationships, jobs, hobbies, habits, the things consuming your time and your heart and your money.

You get to decide whether they’re helping you become the best version of yourself.

Your happiness doesn’t trump someone else’s health — emotional or physical.

What’s needed here is also what’s needed in our world at large. Everyone can benefit from a good dose of understanding, self-examination, and reflection.

How much is Andrew Luck worth?

Andrew Luck’s net worth is estimated to be $40 Million.

How old is Andrew Luck?

How tall is Andrew Luck?

Andrew Luck is an American football quarterback who has proved his football skills since his high-school days. He had a remarkable university football career.

Luck played for ‘Stanford University’ and earned the ‘Maxwell Award’ and the ‘Walter Camp Player of the Year Award.’ He is a two-time ‘Heisman Trophy’ finalist.

He is known for his passing and running abilities.

As of February 2023, Andrew Luck’s net worth is approximately $40 Million.

What do you think about Andrew Luck’s net worth? Leave a comment below.