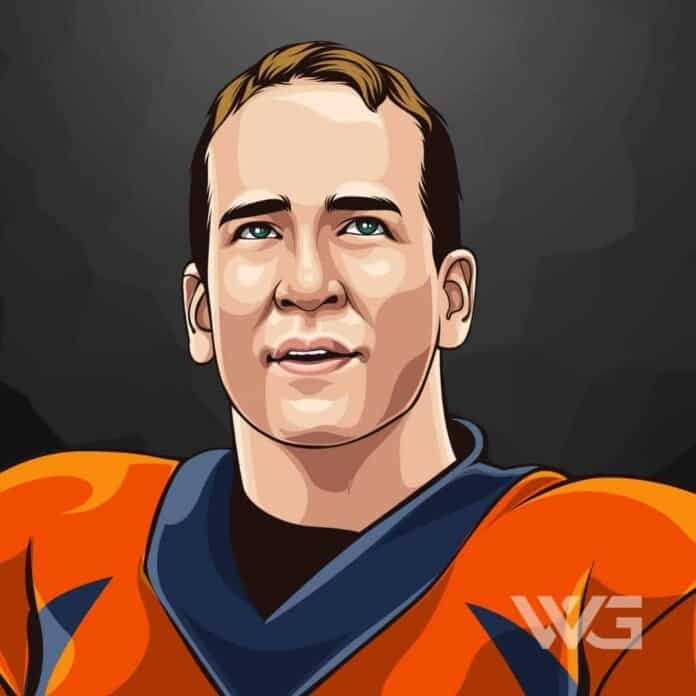 What is Peyton Manning’s net worth?

Peyton Manning is a former American football quarterback who played in the NFL for 18 seasons.

Manning is considered one of the best quarterbacks of all time, and he spent 14 seasons with the Indiana Colts.

He has been nicknamed “The Sheriff” due to his style of playing football. He is one of the most recognizable players in the NFL.

As of February 2023, Peyton Manning’s net worth is estimated to be roughly $250 Million.

Peyton Manning was born on the 24th of March, 1976, in Louisiana. Manning is the older brother of the quarterback Eli Manning and the son of former NFL player Archie Manning.

Manning attended Isidore Newman School, where he started to play football and was named the Gatorade Circle of Champions National player of the year. Over 60 top colleges later recruited him.

Manning began his professional football career in 1998 when the Indianapolis Colts drafted him. He played with the Colts between 1988 and 2010.

He memorized the Colts playbook after one week of being drafted. Manning helped Colts into consistent playoff contenders, and he also led the team to eight division championships.

Manning made his second Super Bowl in 2009, and two years later, he was forced to rest for an entire season after he underwent neck surgery.

Between the years 2012 and 2015, Manning served as the Bronco’s quarterback, and he helped the team to win their division. He made his third Super Bowl appearance in 2016, and the same year, he announced his retirement after 18 seasons.

The following year, the Colts made a bronze statue of Manning outside Lucas Oil Stadium and had a ceremony for hundreds of fans. Manning was also inducted into the Indianapolis Colts “Ring of Honor.”

As of February 2023, Peyton Manning’s net worth is estimated to be $250 Million.

What Does Peyton Manning Spend His Money On?

Peyton Manning is not only a great NFL player, but he is also a great businessman. Manning is one of the highest-paid NFL players, and with his fortune, he can live any lifestyle that he wants.

Peyton Manning lives in a beautiful mansion outside Denver worth $4.6 million. The mansion comes with seven bedrooms, a wine cellar, and an elevator.

Manning likes to go on lavish vacations with his family. One of his most expansive purchases is his $220 bathing suit that he wore on vacation.

Manning is a good man and likes to tip restaurant workers, and recently he purchased 21 Papa John’s restaurants.

Here are some of the best highlights of Peyton Manning’s career:

“If nothing else in life, I want to be true to the things I believe in, and quite simply, to what I’m all about. I know I’d better because it seems whenever I take a false step or two I feel the consequences.” – Peyton Manning

“Some guys lose their focus. They get caught up in the business deals or the endorsements, and they lose their focus. For me, it’s always about football. I’ve never lost sight of what’s making all these other things happen.” – Peyton Manning

“I pray every night, sometimes long prayers about a lot of things and a lot of people, but I don’t talk about it or brag about it because that’s between God and me, and I’m no better than anybody else in God’s sight.” – Peyton Manning

“I pray every night, sometimes long prayers about a lot of things and a lot of people, but I don’t talk about it or brag about it because that’s between God and me, and I’m no better than anybody else in God’s sight.” – Peyton Manning

“When you take a year off from football, you come back for all the enjoyable moments. When you’re not playing, you miss out on all the highs, but you also miss these disappointments. But I would rather be in the arena to be excited or be disappointed than not have a chance at all. That’s football. That’s why everybody plays it.” – Peyton Manning

Now that you know all about Peyton Manning’s net worth and how he achieved success; let’s take a look at some of the lessons we can learn from him:

The pressure is something you feel when you don’t know what the hell you’re doing.

You certainly know when you have an opportunity, and you want to take advantage of it. And it’s certainly disappointing when you don’t.

3. Everyone Needs a Coach

Don’t ever think that you don’t need to be coached no matter how old you are.

How much is Peyton Manning worth?

Peyton Manning’s net worth is estimated to be $250 Million.

How old is Peyton Manning?

How tall is Peyton Manning?

Peyton Manning is an American NFL quarterback who was one of the highest-paid players in the world.

He often endorses many brands and frequently appears in commercials for brands such as DirecTV, Papa Johns, and Buick.

He owns 21 Papa John’s pizza franchises in Colorado. After his retirement, he earns about $10 million per year from endorsements.

As of February 2023, Peyton Manning’s net worth is approximately $250 Million.

What do you think about Peyton Manning’s net worth? Leave a comment below.