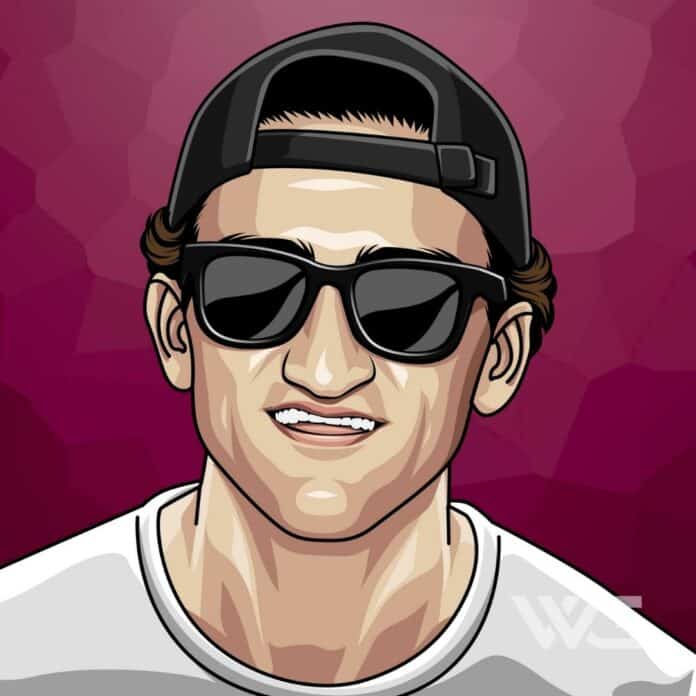 What is Casey Neistat’s net worth?

As of February 2023, Casey Neistat’s net worth is estimated to be $16 Million, which is an incredible number, and very high for a YouTube personality.

Neistat started his career in 2001 with his brother Tom, by making a series of films. He gained his first international exposure two years later when he released iPod’s Dirty Secret, which went viral.

Casey Neistat was born on the 25th of March, 1981, in Gales Ferry, New York. Neistat dropped out from high school during his junior years in school.

At the age of 17, he decided to not go back to school or to graduate. He eventually left his family and he moved to New York City.

He started his career as a vlogger in 2001 which was a big success for him and his brother. They decide to pursue their career as YouTube vloggers after their initial success.

Neistat gained his first exposure in 2003 when he uploaded a video entitled iPod’s Dirty Secret which received national media attention.

The Washington Post, Rolling Stone Magazine, BBC News, CBS News and Fox News, were among many of the media outlets interested in Neistat’s work.

Neistat started his YouTube career with his brother. They uploaded a film series titled Science Experiments, and their work went viral. The series was even featured in Creative Times’s 59th Minute Program. HBO purchased an eight-episode television series of the Neistat Brothers.

Neistat’s YouTube career started in 2010 when uploaded his debut video about the New York City subway. Following that year he continued to upload several videos that went viral on the internet.

Here are some of the most popular videos: Make It Count, The Vietnam Notebook and Draw My Life.

Neistat has received several awards for his work and he is known for being one of the most popular YouTubers worldwide. He has also collaborated with famous celebrities in his YouTube videos, which helped him to quickly rack up his subscribers and viewers.

Since then, Neistat has attracted a ridiculous number of views on his YouTube videos and has amassed over 9.7 million subscribers which makes his channel one of the most popular and viral on YouTube at this point.

Here are some of the best highlights of Casey Neistat’s career:

“If it is broken fix it. If you don’t like it change it. And if you want something to take it. Don’t complain about it. Do something about it.” – Casey Neistat

“To sit around and say, I’m not motivated so I can’t do anything, to me is the same thing as being like, I’m so hungry I can’t eat. The only way you’re going to alleviate your hunger is to eat some food, the only way to fix your motivational problem is to do something.” – Casey Neistat

“I get, like, 50 emails a day from kids being like, ‘I want to go on this trip around the world. How do I get a sponsor?” – Casey Neistat

“The reason why people wear pajamas to the airport in the first place is so that they’ll be comfortable during their flight. But you know, typically, air travel is 50 to 75 percent of the time you spend traveling. The rest of the time you spend in public places like airports and around other people. That’s when looking good trumps comfort.” – Casey Neistat

“As a director, I have the greatest job in the world, but if I don’t push the boundaries, then what’s the point of having it?” – Casey Neistat

View our larger collection of the best Casey Neistat quotes!

How much is Casey Neistat worth?

Casey Neistat’s net worth is estimated to be $16 Million.

How old is Casey Neistat?

How tall is Casey Neistat?

Casey Neistat is known from his YouTube videos. There’s no doubt that his net worth will increase in his next five years, there’s also no doubt that he is the most driven, talented, and hard-working YouTuber that’s going viral right now.

Neistat has over 9.7 million subscribers and attracts millions of views on every single video he makes, which makes him one of the most popular YouTubers of all time. This also explains why he’s been able to earn so much money from the site.

As of February 2023, Casey Neistat’s net worth is estimated to be $16 Million. If you enjoyed this article, don’t forget to check out our article on Blippi’s net worth.

What do you think about Casey Neistat’s net worth? Leave a comment below.