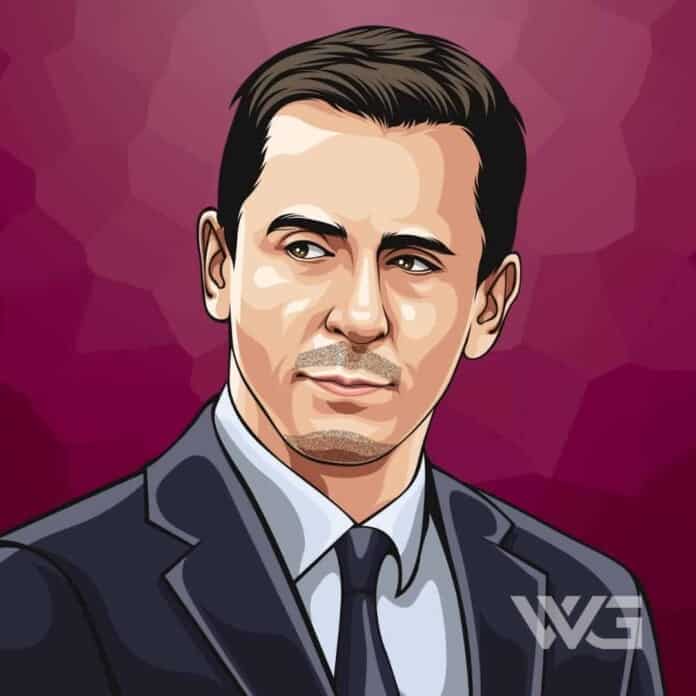 What is Gary Neville’s net worth?

Since retiring from football in 2011, he went into punditry and was a commentator for Sky Sports until he took over the head coach position at Valencia in 2015.

As of December 2022, Gary Neville’s net worth is estimated to be roughly $25 Million.

Gary Alexander Neville was born on the 18th of February 1975, in Manchester, England. He joined Manchester United as an apprentice upon leaving school in 1991 and captained the youth side to FA Youth Cup glory in his first season.

He made his senior debut for United in September 1992 against Torpedo Moscow in the UEFA Cup.

In the 1994 – 95 season, Neville became United’s first-choice right-back when Paul Parker was ruled out by injury and remained so until his retirement.

Following Roy Keane’s departure in November 2005, Neville was appointed the new club captain. In January 2006, his actions were the subject of some controversy after his celebration in front of the visiting Liverpool fans at Old Trafford.

In 2009, he was sent off for a tackle on Adam Hammill in United’s 2–0 away win against Barnsley in the League Cup Fourth Round.

Neville announced his retirement from football after almost 20 years playing at Manchester United in 2011. His final professional appearance was against West Bromwich Albion on New Year’s Day 2011, a 2–1 victory at The Hawthorns.

Throughout his career as a player on the English national team, Neville played alongside legends such as Frank Lampard, John Terry, Wayne Rooney, and Ashley Cole.

Here are some of the best highlights of Gary Neville’s career:

“With good coaching, proper motivation and the right club structure with organic growth, you can achieve an awful lot in football.” – Gary Neville

“They’re crying. It was Drogba, it was the angels, it was the heavens, it was the stars, it was the gods, it was everything for Chelsea. This is not anything to do with football. This is more than football, this is spirit. Never giving in, fighting to the end, that English spirit running right the way through this Champions League for Chelsea.” – Gary Neville

“I have been a Manchester United fan all my life and fulfilled every dream I’ve ever had. I am disappointed that my playing days are at an end. However, it comes to us all and it’s knowing when that time is and for me that time is now.” – Gary Neville

“We always looked forward to playing Aston Villa to hear him mangle Ugo Ehiogu’s name. “Make sure you pick up Ehugu, Ehogy, whatever his name is.” – Gary Neville

“A collection of strong-minded individuals who have learned how to dismiss mistakes, disappointments and problems in their personal life make up a strong team. If the majority of the team have that then, as a unit, you are almost impossible to beat.” – Gary Neville

Now that you know all about Gary Neville’s net worth, and how he achieved success; let’s take a look at some of the best lessons we can learn from him:

You hear people all the time complaining about how crazy the world is and how they want it to change, but if you tell them to make the first step…:

“What? Me? Do you think there is something wrong with me? I am perfect, there is nothing I need to change. These people are crazy and they need to change, not me! They are the ones who are destroying us all, not me… Those bastards!”

2. Loneliness is Different From Solitude

There is a difference between being lonely and being in solitude.

When you are in solitude, you take advantage of it to get in touch with your inner self, to meditate and to quiet your mind, and that constant need to be around others in order for you to no longer feel lonely, will disappear.

3. The More We Express Our Gratitude, the More Things We Will Have to Be Grateful For

The law of attraction works in all that is good and also in all that is bad, and it’s only up to us whether we choose to focus our attention on the negative or on the positive.

Focus your attention on the many great things you have and you are grateful for, and you will see that the more you do that, the more reasons you will have to express your gratitude for.

How much is Gary Neville worth?

Gary Neville’s net worth is estimated to be $25 Million.

How old is Gary Neville?

How tall is Gary Neville?

Gary Neville is an English football coach and he is among the most decorated English and European footballers of all time. In addition, he has won 20 trophies including eight Premier League titles and two Champions League titles.

As of December 2022, Gary Neville’s net worth is estimated to be roughly $25 Million.

What do you think about Gary Neville’s net worth? Leave a comment below.