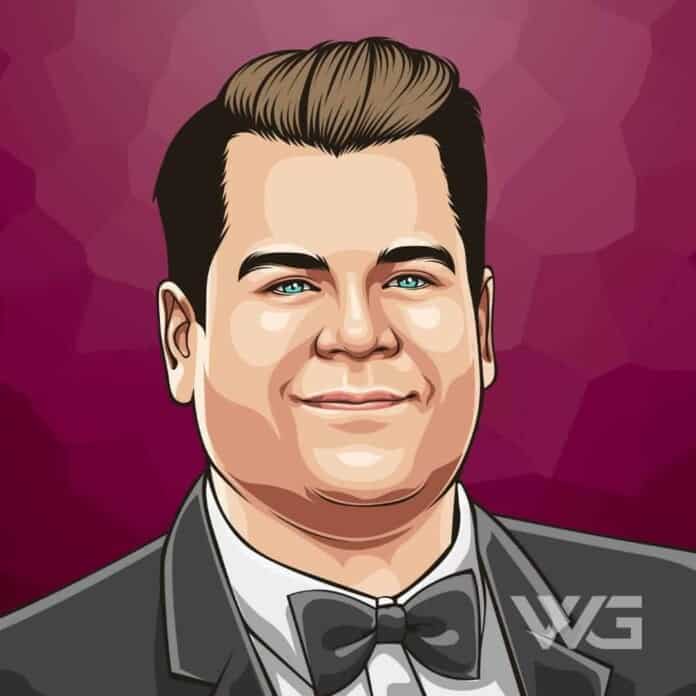 What is James Corden’s net worth?

James Corden is an English actor, comedian, and television host from Hillingdon, London. Corden is best known for hosting ‘The Late Late Show with James Corden’, a late-night television talk show on CBS.

As of December 2022, James Corden‘s net worth is approximately $70 Million.

James Kimberley Corden was born on the 22nd of August, 1978, in Hillingdon, London. Corden is the son of Malcolm and Margaret Corden. He grew up in Hazlemere, in Buckinghamshire. He has two sisters as well.

Corden attended Park Middle School and Holmer Green Upper School. Though he was raised in a Salvation Army Church, he has stated he doesn’t identify as a Christian any longer. He also studied drama at the Jackie Palmer Stage.

Corden began his career by playing small roles in several TV shows such as ‘Boyz Unlimited’, ‘Teachers’, ‘Hollyoaks’, ‘Little Britain’, and ‘Dalziel and Pascoe’. He also made appearances in films, such as ‘Whatever Happened to Harold Smith’ and ‘Curse of the Gods’.

He gained popularity for his role in ‘Fat Friends’, a popular British drama series that aired on ITV from the year 2000. The show was an average success.

It also won several important awards and nominations. Over the ensuing years, he appeared in several films such as ‘The History Boys’, ‘Started for Ten, and ‘How to Lose Friends and Alienate People’.

In 2010, he started hosting the show ‘A League of Their Own’, a British sports-based game show, which began airing from May. The same year, he appeared in a supporting role in ‘Gulliver’s Travels’, an American adventure fantasy comedy, which was directed by Rob Letterman.

In 2011, he played the lead role in the popular award-winning comedy play ‘One Man, Two Guvnors’. Over the next few years, he appeared in films, such as ‘Begin Again’, ‘Into The Woods’, ‘Kill Your Friends’, and ‘Trolls’. In 2015, he began hosting ‘The Late Late Show with James Corden’, which was well-received by both the audience and critics.

Here are some of the best highlights of James Corden’s career:

“Louis Tomlinson, who is a member of One Direction, his mum was a chaperone on ‘Fat Friends.’ So Louis used to come to the set with his mum, and since I was the only sort of young person around, we would kick a football around, things like that.” – James Corden

“No one could have predicted on day one of the rehearsals, that a year and a half later we would have shot a film and all be living in New York. It was surreal.” – James Corden

“Nobody tells you when success comes around; in its transient way, you’re just working and exhausted all the time. Sometimes I think I’m just sleeping in the back of cars, d’you know what I mean?” – James Corden

“On stage, you have to have incredible confidence, or you would stop doing it. But I don’t think I will ever get to the point where I go, ‘I know exactly what I am doing,’ and I don’t think I want to.” – James Corden

“I don’t consider myself to be incredibly confident, or really lacking in confidence. When you’re on Jonathan Ross‘ or Graham Norton’s show, inevitably there’s something to sell. And there’s a live audience; you’re sat between Cameron Diaz and Tinie Tempah – I don’t really see it as ‘me.’ It would be odd if it was.” – James Corden

View our larger collection of the best James Corden quotes!

While Corden frequently pokes fun at his singing abilities, he also belts ‘em out with the best of them. It’s interesting to try to guess whether it’s Corden who makes his guests feel comfortable enough to sing naked without autotune or editing – or vice versa.

In the work world, you might be the office star or the one who still soaks it all up and hopes for that next big promotion. It’s important to realize though that while reflected glory can be fleeting, making those you work with feel comfortable enough to shine is a valuable talent in and of itself.

In his song Anthem, the late great Leonard Cohen famously sang “There is a crack in everything, that’s how the light gets in.” Perfection is overrated. Don’t believe me?

How much more fun is it to hear Corden and celebs warbling their tunes together and missing high notes rather than hearing the shiny packaged radio version? So much more fun! If you struggle with something it doesn’t make you a failure, it makes your ultimate success that much more impressive.

Let’s face it, James Corden is famous. He even has his own TV show! The thing is though, that he has no problem being a fanboy either.

Whether he’s belting it out with Sir Paul McCartney (and weeping at times) or trying to keep up with Adele, he’s clearly second fiddle in the equation … and he’s just fine with it. While kissing-up is never a great career move, letting someone know you think they’re great is always a smart move.

How much is James Corden worth?

James Corden’s net worth is estimated to be $70 Million.

How old is James Corden?

How tall is James Corden?

James Corden is best known for ‘The Late Late Show with James Corden’, which started airing from 2015 on the CBS network. The show has been a moderate success and has earned a few awards. He came to prominence after his brilliant performance in the British drama series named ‘Fat Friends’.

What do you think about James Corden’s net worth? Leave a comment below.