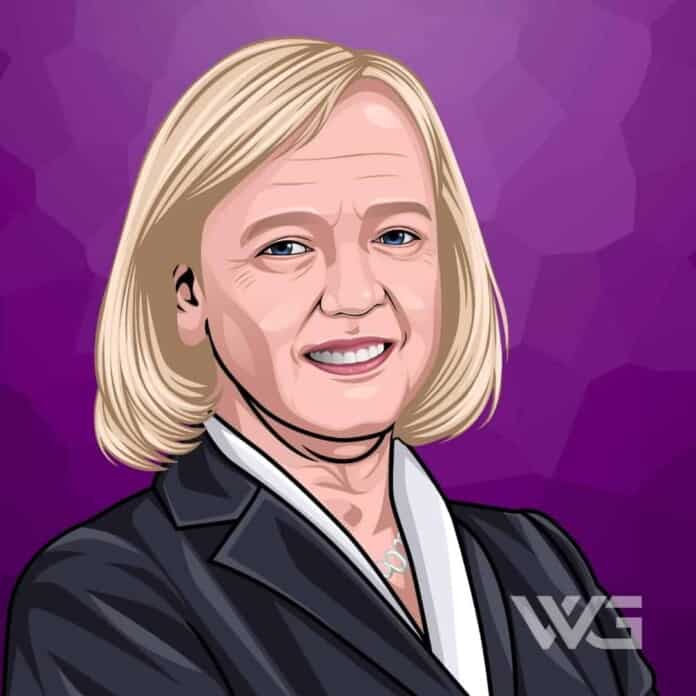 What is Meg Whitman’s net worth?

Whitman is a board member of Procter & Gamble and General Motors. Whitman was an executive in The Walt Disney Company, where she was vice president of Strategic Planning throughout the 1980s.

In the 1990s, she was an executive for DreamWorks, Procter & Gamble, and Hasbro.

Margaret Cushing Whitman was born on the 4th of August, 1956, in New York.

Whitman is the daughter of Margaret Cushing and Hendricks Hallett Whitman, Jr. Whitman is also a great-great-granddaughter of U.S. Senator Charles B. Farwell of Illinois.

In 2008, Whitman was cited by The New York Times as among the women most likely to become the first female president of the United States.

She ran for Governor of California in 2010. She won the Republican primary. Whitman spent the second most of her money on the race than any other political candidate spent on a single election in American history.

She was defeated by Democratic former Governor Jerry Brown in the 2010 California gubernatorial election by 54% to 41%.

Here are some of the best highlights of Meg Whitman’s career:

“Remember that you can do anything you want to do. Don’t let anyone say, ‘You’re not smart enough… it’s too hard… it’s a dumb idea… no one has done that before… girls don’t do that.’ My mom gave me that advice in 1973. And it allowed me to never worry about what others were saying about my career direction.” – Meg Whitman

“A business leader has to keep their organization focused on the mission. That sounds easy, but it can be tremendously challenging in today’s competitive and ever-changing business environment. A leader also has to motivate potential partners to join.” – Meg Whitman

“Many companies operate from more of a command-and-control environment – they decide what’s going to happen at headquarters and have the organization execute. That doesn’t work here because it’s the community of users who really have control.” – Meg Whitman

“So we enable, not direct. We think of our customers as people, not wallets. And that has implications for how we run the company. We partner with our customers and let them take the company where they think it’s best utilized.” – Meg Whitman

“You know, in a workplace, when you shrink the size of a workforce, there is pain there. But there is no question: we have a government that we can no longer afford. That is the cold, hard fact. So we have to make this more efficient. We have to sunset programs that no longer work. We have to eliminate waste and fraud, and we must do this.” – Meg Whitman

Now that you know all about Meg Whitman’s net worth and how she achieved success; let’s take a look at some of the lessons we can learn from her:

Communication is at the heart of e-commerce and the community.

When people use your brand name as a verb, that is remarkable.

Voice communications are moving on to the Internet. In the end, the price that anyone can provide for voice transmission on the Net will trend toward zero.

How much is Meg Whitman worth?

Meg Whitman’s net worth is estimated to be $3.5 Billion.

How old is Meg Whitman?

How tall is Meg Whitman?

Whitman is a former executive for companies like the Walt Disney Company, Hasbro, Proctor and Gamble, and Dreamworks, but made her fortune as eBay’s CEO and the president and CEO of Hewlett-Packard. She was also the Republican nominee for Governor of California in 2010.

What do you think about Meg Whitman’s net worth? Leave a comment below.