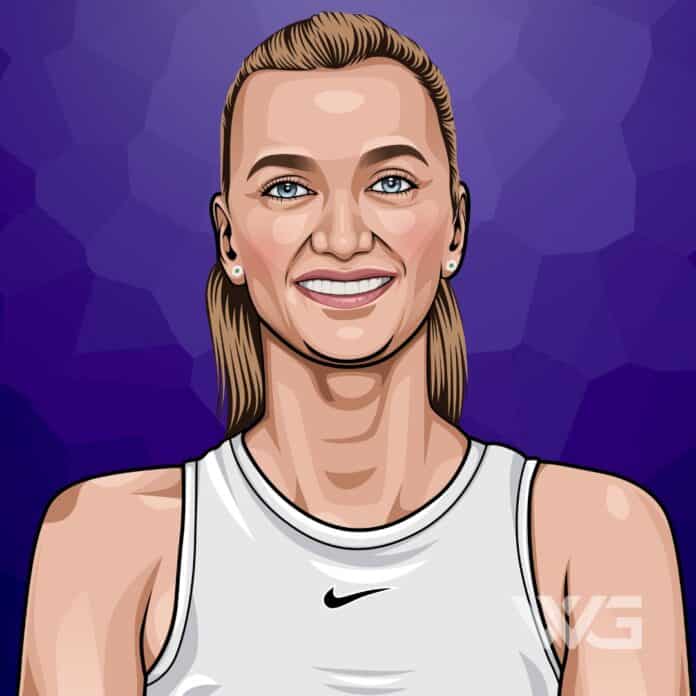 What is Petra Kvitova’s net worth?

Petra Kvitova is a professional tennis player best known for her left-handed groundstrokes.

Since turning pro in 2006, Kvitova has earned 29 career singles titles and a bronze medal at the 2016 Olympics.

While she has been playing for over a decade, Kvitova has made no plans to retire and is expected to continue playing for many more years.

As of February 2023, Petra Kvitova’s net worth is estimated to be $24 Million.

Petra Kvitova was born March 8, 1990, in Bilovec, Czechoslovakia, to Pavla and Jiri Kvitova.

She started training in her hometown until she turned 16 and was encouraged to pursue a professional career.

As a junior player, Petra reached a career-high ranking of No. 27 in the world rankings in 2007, and she made her single Grand Slam appearance as a junior at the Wimbledon Championships.

While she attempted to qualify for the WTA tournament, she lost during the second round to Ekaterina Ivanova.

Petra Kvitova made her WTA debut at the Nordic Light Open in August of 2007, the same year she also made her Fed Cup debut.

The following year, she made her Grand Slam tournament debut at the French Open and made it all the way to the last 16 sets, where she lost.

She won her maiden career title at the Hobart International in 2009, defeating Iveta Benesova to clinch victory.

In 2010, Kvitova made it to the semifinals of Wimbledon before losing to the defending champion Serena Williams in straight sets.

Kvitova won her first Grand Slam title in 2011 at the Wimbledon Championships, as well as the Fed Cup title at the end of the season.

She continued to find success until 2017, when her home was broken into, and she was attacked with a knife.

This caused her to suffer from cuts to her dominant hand that injured the nerves and tendons.

Fortunately, she was able to return, and in 2018 she won five WTA titles and ended the year ranked No. 7 in the World Tennis rankings.

Although she struggled in 2019 and 2020 from injuries and difficulties with her form, in 2022, she made a resurgence but failed to win any major titles.

Due to her incredible skills, Petra Kvitova has become one of the richest tennis players in the world, and her net worth is only increasing.

However, Petra’s individual tournament earnings have never been made public, leaving her fans to speculate about which matches have earned her the most.

That said, we do know that she has earned $33.4 million in prize money during her career.

This makes her the 7th highest prize-money-winning female tennis player.

Kvitova is also estimated to have earned millions from sponsors, including Nike, Tag Heuer, ALO Diamonds, Wilson, and Ritmo Mundo.

Petra Kvitova has previously been in relationships with Czech tennis players Adam Pavlasek and Radek Stepanek.

She was later engaged to Czech professional tennis player Radek Meidl in 2014, but the couple split up in 2016.

Since 2021, Kvitova has been dating her coach Jiri Vanek, and in 2022 they announced their engagement.

Petra Kvitova has earned many awards during her career thanks to her skills on the court.

While all of her accolades are significant, some stand out over others due to their importance and prestige.

Here are some of Petra Kvitova’s best career awards and achievements:

Although these are only a small number of Kvitova’s accomplishments, they are by far her most prestigious.

Like Maria Sharapova, Petra Kvitova has won numerous important awards for her impressive skills on the court.

How Does Petra Kvitova Spend Her Money?

Although Petra Kvitova could easily live in any of the most expensive cities in the world, she has chosen to live a relatively quiet life in Prostejov, Czech Republic.

Unfortunately, how much she spent on her home is unknown, and information about it hasn’t been made public.

While Kvitova has done well to keep her spending habits under wraps, she may release more details in the future.

We will be sure to keep you updated should more news about her spending become available.

Petra Kvitova has reached almost as many milestones as Agnieszka Radwanska, and she is still continuing to find success.

However, some moments in her career have stood out more than others for their impact on her fame and fortune.

Here are some of the best highlights of Petra Kvitova’s career:

Like Chris Evert, she has done a lot in a short period of time and left a lasting mark on the tennis industry.

Petra Kvitova has dedicated her life to the sport of tennis, and she is willing to do whatever it takes to keep playing.

While she acknowledges that she has had her ups and downs throughout her career, she remains proud of everything she has accomplished.

Here are our favorite quotes from Petra Kvitova:

There is a lot that we can learn from Petra Kvitova and her long career as a professional tennis player.

Now that you know all about Petra Kvitova’s net worth, we can take a closer look at what she can teach us about reaching our own goals.

Here are some of the best success lessons to learn from Petra Kvitova:

1. Never Give Up On Your Dreams

Even if it seems like you may never achieve your dreams, you should never give up on them.

While you may not reach your original goal, you may find incredible opportunities along the way that you wouldn’t have found if you’d given up.

If you want to be successful, you’ll have to consistently work hard in order to achieve your goals.

It won’t always be easy or fun, but once you reach the top, it will all have been worth it.

To help yourself stay motivated, don’t forget to treat yourself after reaching a milestone, no matter how small it may seem.

By rewarding yourself when you make progress, you can help keep yourself focused on reaching your goals with positive reinforcement.

Petra Kvitova has achieved a lot during her career, and she is still going strong today.

While she could easily retire with her fortune and live comfortably, Kvitova has made no plans to retire any time soon.

Make sure to check back often so that you can stay up-to-date with any changes impacting Kvitova’s wealth and ongoing career.

As of February 2023, Petra Kvitova’s net worth is estimated to be $24 Million.

What do you think about Petra Kvitova’s net worth? Leave a comment below.

What is Diana Ross' net worth? Introduction  As of ,...