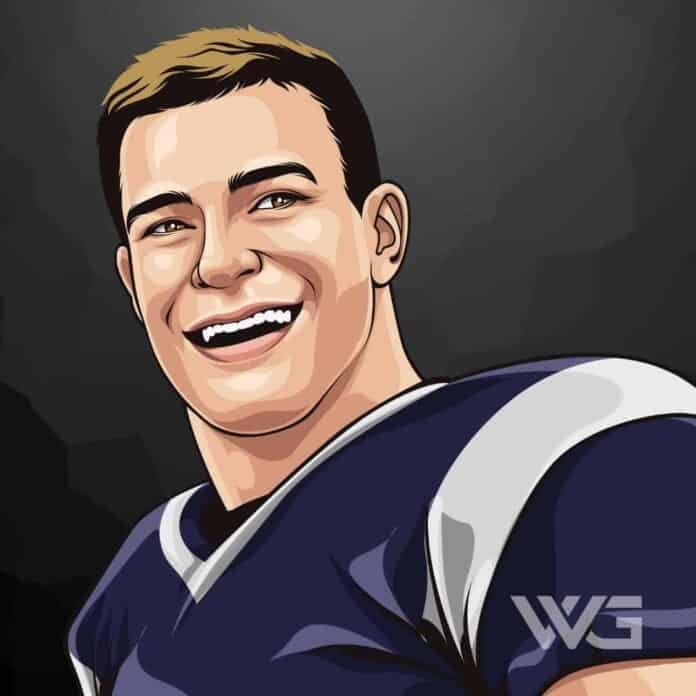 What is Rob Gronkowski’s net worth?

As of December 2022, Rob Gronkowski’s net worth is roughly $45 Million.

Robert James Gronkowski is a retired American football tight end who played his professional career for the New England Patriots of the NFL.

Robert James Gronkowski was born on the 14th of May, 1989, in New York. Gronkowski is of Polish descent and he has four brothers.

Gronkowski attended Williamsville Hills High School where he was quite active in a variety of sports such as football and basketball.

Gronkowski chose to attend the University of Arizona after his high school graduation. His performance as a freshman in 2007 was excellent, with 28 receptions for 525 yards and six touchdowns. He received honorable mentions from several publications.

The following season, he was named the John Mackey National Tight End of the Week twice. Despite being a brilliant player, he had to miss his junior season in 2009 due to a back injury.

In the 2010 NFL Draft, he was drafted by the New England Patriots. He, later on, signed a four-year contract which was worth  $4.4 million including a signing bonus of $1.76 million. His performance in his first season was remarkable and won him three nominations for Pepsi NFL Rookie of the Week.

His second season began well, with him catching his first touchdown in their first victory over the Miami Dolphins. By the eleventh week, he was leading all tight ends with a total of 10 touchdowns. During the Patriots’ victorious match against Indianapolis Colts, he broke the NFL record for touchdowns scored in a single season by a tight end.

In early 2013, he was diagnosed with an infection in his forearm for which he was initially placed on a course of antibiotics. Later, he went through surgery as well. By October 2013, he was ready to play again. He continued playing brilliantly for the Patriots.

Here are some of the best highlights of Rob Gronkowski’s  career:

“I was running super slow. Chris thought I was done. Then one day at the end of February, I woke up and my body felt good. I was just so happy. I was faster than my brother again.” – Rob Gronkowski

“I feel like when I do some dance moves during the week or at the house, I’m quicker on my feet. I can react quicker just from dancing.” – Rob Gronkowski

“I was always blessed growing up with opportunities and access to facilities, equipment, and playing with my brothers in the backyard to be the best athlete I could be.” – Rob Gronkowski

“Just like any other game we’re taking on we’ve got to prepare, prepare hard, mentally, physically. We’ve been practicing hard.” – Rob Gronkowski

“Keep doing what you have to do to help the team out.”  – Rob Gronkowski

“Just put football first, or your job first. Give everything you’ve got all week, work hard, work super-hard to take it to the next level every week. And when you feel like you got to the point where you want to be, you definitely need the time to go out, relax, have a good time, take all the stress off it.” – Rob Gronkowski

1. You Still Don’t Have it Figured Out, and That’s OK

Many people think that when they graduate, they’ll be graced with instant clarity and acute focus. But in the “real” world, everyone is just figuring it out.

2. The Older You Get, the Harder it is to Change a Habit

When you’re young, you take for granted nonchalant habits and change quickly when you desire. As you age, your brain is hard-wired to fall back on habits, and it is harder to change—much harder.

3. Burned Bridges Stay With You For Life

In college, it may have been easy to talk behind your roommate’s back or start an “I hate my ex” club. But when you graduate, you realize how important all relationships are.

How much is Rob Gronkowski worth?

Rob Gronkowski’s net worth is estimated to be $45 Million.

How old is Rob Gronkowski?

How tall is Rob Gronkowski?

Robert Gronkowski is a well-known football player who was drafted by the Patriots during the second round of the 2010 NFL Draft. Undoubtedly one of the best tight ends in the history of the NFL, he is also the first tight end to have three seasons with 10+ touchdowns as well as 1000+ receiving yards.

What do you think about Rob Gronkowski’s net worth? Leave a comment below.