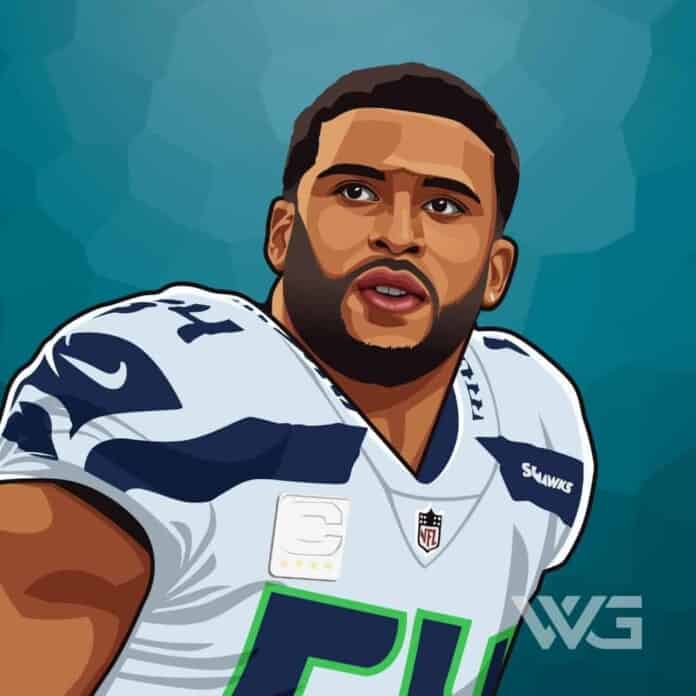 What is Bobby Wagner’s net worth?

Bobby Wagner is an American football linebacker for the Seattle Seahawks of the NFL.

Wagner played college football at Utah State and was drafted by the Seahawks in the second round of the 2012 NFL Draft.

Bobby Joseph Wagner was born on the 27th of June, 1990, in Ontario, California.

He played high school football for the Titans. In 2007, he registered 125 tackles (92 solos, 33 assists), including four sacks as a senior.

He earned second-team California Division 2 all-state honors after helping lead the Titans to a CIF division title and was named to the All-San Bernardino County team.

Seattle selected Wagner in the 2012 NFL Draft in the second round. Bobby played college football for the Utah State Aggies.

During his first NFL season, he intercepted his 1st career pass off to Ryan Tannehill, Miami Dolphin’s quarterback. Moreover, his 1st career sack was on Cam Newton. In addition to this, he achieved many awards and titles from his career so far.

He played alongside and against some of the well known NFL players, including Colin Kaepernick, and many more other players. Bobby is also included in the NFL Top 100 Players of 2014 where he was ranked 69th position.

In 2019, Wagner signed a three-year, $54 million contract extension with the Seahawks through the 2022 season with $40.2 million guaranteed, making him the highest-paid middle linebacker in the league.

In week 16 against the Arizona Cardinals, Wagner recorded a team-high 13 tackles and sacked Kyler Murray once during the 27–13 loss.

Here are some of the best highlights of Bobby Wagner’s career:

“I said, ‘OK, how can I do something business-related while I’m still in the league?’ and I looked at negotiating my deal as something that I could do if I put the work in, so I did that.” – Bobby Wagner

“You think about guys that got Nike or Jordan contracts, they always rely on their agent so that when they’re done playing football they don’t have no relationship or contact – you’ve been with Nike or Jordan for like 13 years and you don’t know anybody.” – Bobby Wagner

“There was a lot that kind of went into it but I had been thinking about it and preparing for it for a while. I felt like I did my homework, reached out to various different people in different avenues that negotiate deals that are not just football, and so I felt like that helped me prepare for that.” – Bobby Wagner

Now that you know all about Bobby Wagner’s net worth, and how he achieved success; let’s take a look at some of the lessons we can learn from him:

More than just thinking positive, you have to put it into action. Action, actually, is the key to developing self-confidence. It’s one thing to learn to think positive, but when you start acting on it, you change yourself, one action at a time.

2. Be Kind and Generous

If this is too corny for you, move on. But for the rest of you, know that being kind to others, and generous with yourself and your time and what you have, is a tremendous way to improve your self-image.

It’s hard to be confident in yourself if you don’t think you’ll do well at something. Beat that feeling by preparing yourself as much as possible.

How much is Bobby Wagner worth?

Bobby Wagner’s net worth is estimated to be $10.4 Million.

How old is Bobby Wagner?

How tall is Bobby Wagner?

Wagner is a five times Pro Bowl Champion and three times First-team All-WAC, Bobby is among the highest earners of recent times in NFL history.

What do you think about Bobby Wagner’s net worth? Leave a comment below.