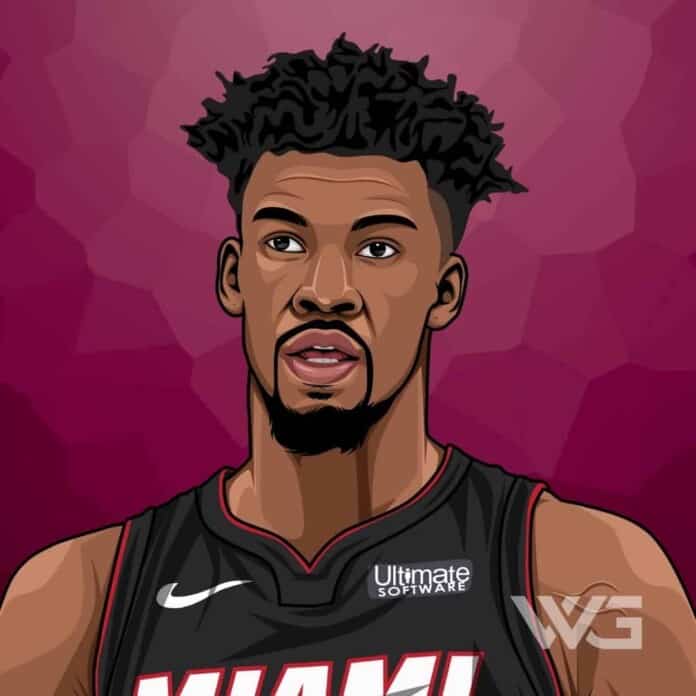 What is Jimmy Butler’s net worth?

Butler plays for the Miami Heat of the NBA. After playing one year of college basketball for Tyler Junior College, he transferred to Marquette University.

He was drafted with the 30th overall pick in the 2011 NBA draft by the Chicago Bulls.

Butler would play six seasons for the Bulls and be instrumental in their NBA Playoffs appearances in five of those.

As of December 2022, Jimmy Butler’s net worth is estimated to be $60 Million.

Jimmy Butler III was born on the 14th of September, 1989, in Houston, Texas. His father abandoned the family when he was only an infant. His mother raised him in an impoverished household in the Houston suburb of Tomball.

When he was 13 years old, his mother, Londa Butler, told him that she did not want him in her house any longer, saying, “I don’t like the look of you. You gotta go.” Homeless and afraid, Butler bounced back and forth between the homes of his friends.

Butler played 106 games for Marquette overall, averaging 12.0 per game. After he graduated from college, he was up for the 2011 NBA draft and was chosen by the Chicago Bulls as their 30th overall pick. He signed his rookie contract with the Bulls on December 9, 2011.

In 2015, the Bulls offered a five-year, $95 million contract to Butler, who accepted it. The contract also granted him a fifth-year player option. He suffered a left knee strain on 5 February 2016 in a game against Denver Nuggets.

The following year, he played an important role in the Bulls’ victory in their season opener against the Boston Celtics on October 27, 2016, scoring a team-high 24 points.

At the beginning of the 2017-18 season, on June 22, 2017, the Bulls traded Butler to the Minnesota Timberwolves. Butler subsequently played 59 games in the regular season with the Timberwolves.

As of December 2022, Jimmy Butler’s net worth is estimated to be roughly $60 Million.

How Does Jimmy Butler Spend His Money?

Butler spends some of his money on charity work and on his real estate.

Jimmy Butler has helped charities such as Mercy Home for Boys & Girls and Share Our Strength: No Kid Hungry.

Butler owns a fantastic home in Ambler, Pennsylvania. The lot spans a whopping 7.8 acres and the home, which has six bedrooms and seven bathrooms is 14,000 sqft.

Here are some of the best highlights of Jimmy Butler’s career:

“Everybody’s so scared, to be honest with one another. If you didn’t like how I handled myself in practice, one of the players came up to me. Somebody says something – anybody. I’m not gonna take it as an offense; it’s not personal.” – Jimmy Butler

“We’ll go on vacation, but we don’t really care to go see Rome or anything. We want to play dominoes. We like the fact that we can say, ‘Oh, we went to Rome.’ ‘Well, what’d you do in Rome?’ ‘Played dominoes.'” – Jimmy Butler

“My job is to go out there and play. I mean, I guess you could guess who I would rather play for. We’re not going to sit here and say that that’s a huge secret. I mean, whoever they decided to bring in, my job was to help them win to the best of my ability.” – Jimmy Butler

“Music is my way of taking my mind away from the game. When I’m singing, you don’t get anything to worry about. You don’t gotta worry about scoring however many points or winning the game. No matter how good or how bad you are, it’s fun.” – Jimmy Butler

“My whole life, people have doubted me. My mom did. People told me in high school I’m too short and not fast enough to play basketball. They didn’t know my story. Because if they did, they’d know that anything is possible.” – Jimmy Butler

Now that you know all about Jimmy Butler’s net worth and how he achieved success; let’s take a look at some of the lessons we can learn from him:

Hard times don’t create heroes. It is during the hard times when the ‘hero’ within us is revealed.

Remember, it’s just a bad day, not a bad life.

Whatever is worrying you right now, forget about it. Take a deep breath, stay positive, and know that things will get better.

How much is Jimmy Butler worth?

Jimmy Butler’s net worth is estimated to be $60 Million.

How old is Jimmy Butler?

How tall is Jimmy Butler?

Jimmy Butler is an American professional basketball player who was selected by the Chicago Bulls in 2011. In 2017, he was traded to Minnesota Timberwolves, whom he helped in reaching the playoffs as well.

As part of the US basketball team, Butler earned a gold medal at the 2016 Summer Olympics in Rio de Janeiro. In 2015, he was hailed as the NBA’s Most Improved Player and included in the NBA All-Star teams for four successive years.

As of December 2022, Jimmy Butler’s net worth is estimated to be $60 Million.

What do you think about Jimmy Butler’s net worth? Leave a comment below.