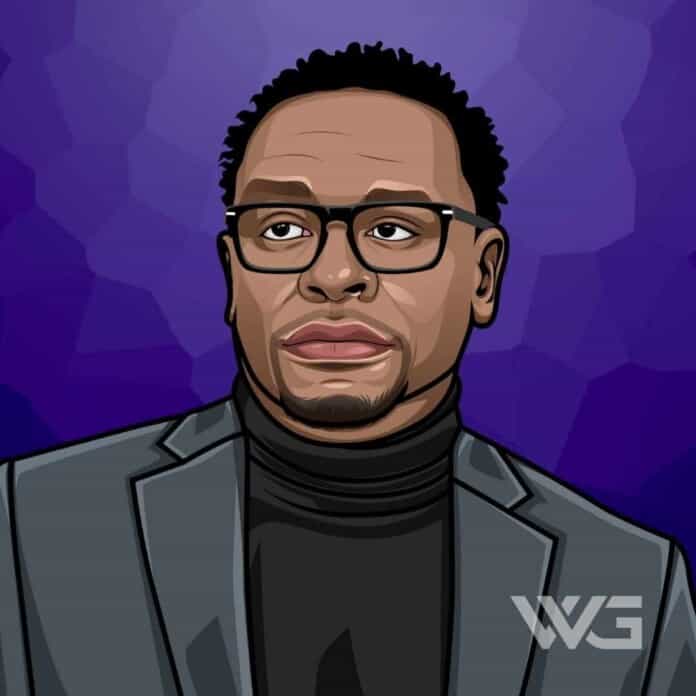 What is Scarface’s net worth?

Scarface is an American rapper, record producer, and politician.

He is best known as a member of the Geto Boys. He grew up in Houston and is originally from the city’s South Acres.

Brad Terrence Jordan was born on the 9th of November, 1970, in Houston, Texas.

Jordan dropped out of high school and worked as a drug dealer. When he was younger, he attempted suicide and spent many times in the hospital psychiatric ward. He was brought up as a Christian and converted to Islam in 2006.

His album ‘The Last of a Dying Breed’ earned “Lyricist of the Year” in 2001. He was the president and coordinator of Def Jam South in 2000. Scarface has dropped 11 studio albums.

After releasing many successful singles, he would go on to sign with Rap-A-Lot and join a group that was best known as Geto Boys replacing a member who left and released the group’s second album, ‘Grip It!’.

His album ‘Mr. Scarface Is Back’ was a success. He remained in the group while releasing a series of solo albums that kept him in the public view with increasing sales, making him the only Geto Boys member that has always remained with the group since the group personnel was revamped in 1989.

In 2002, Scarface dropped ‘The Fix.’ He was also featured on ‘The Biggie Duets’ alongside Big Gee and Akon. In addition to his career as a rapper, he was the coordinator and president of Def Jam South from 2000 to 2005.

Scarface announced that he was working on the new album ‘The Habit’ in 2010, which included features from John Legend and Drake.

He co-hosted a worldwide producer showcase with iStandard, from which thousands of producers were considered, and after a selection of the top 8, Alex Kresovich was named the winner.

Here are some of the best highlights of Scarface’s career:

“Hip-hop has always been about style and self-expression, but it feels like as the culture’s gotten older, that’s somehow been lost. You’ve got all of these guys out here now just trying to transform into whatever’s hot to chase some dollars and some airplay, but if you’re chasing the next man, who the fuck are you really?” – Scarface

“I’ve always known why we were making the music we were making, just like I know how a lifetime of subtle and blatant racism and oppression can make you want to reach for your pistol and either shoot the oppressor or shoot yourself.” – Scarface

“Don’t get it confused. We are the hunted. We are the motherfucking target. You better wake the fuck up. And I don’t believe in peaceful protest. Peaceful protest will get your ass kicked again. It’s just like in life. If a motherfucker is fucking with you in the hood and you keep turning the other cheek.” – Scarface

“I’m happy when I see ni**as fight back. Like that shit in Ferguson was great to me. Or when they rioted in L.A. after the Rodney King trial? I love that shit. I’m for anything radical when it comes to the mistreatment of minorities. You can’t lay down in the face of oppression.” – Scarface

“And to anyone coming up in the game, please take this advice: you get in the homeboy business, and you think you’re going to make it with your friend, but the sad truth is, nine times out of ten in that situation, your homeboy isn’t going to play fair.” – Scarface

Now that you know all about Scarface’s net worth and how he achieved success; let’s take a look at some of the lessons we can learn from him:

Scarface got really sick from the current coronavirus. However, he made it through eventually.

The harder you work for something, the greater you will feel when you achieve it.

Hard work will take you to the top. But talent will only bring you to the door.

How much is Scarface worth?

Scarface’s net worth is estimated to be $100 Thousand.

How old is Scarface?

How tall is Scarface?

Scarface is an American rapper and singer who was born in Houston, Texas.

He started out under the name Akshun and released a single called ‘Scarface.’ He joined Rap-A-Lot records and joined the Geto Boys. Their album ‘Grip It! On That Other Level’ was very successful.

He then released his debut album ‘Mr. Scarface Is Back’.

He stayed with the Geto Boys while continuing a solo career.

What do you think about Scarface’s net worth? Leave a comment below.