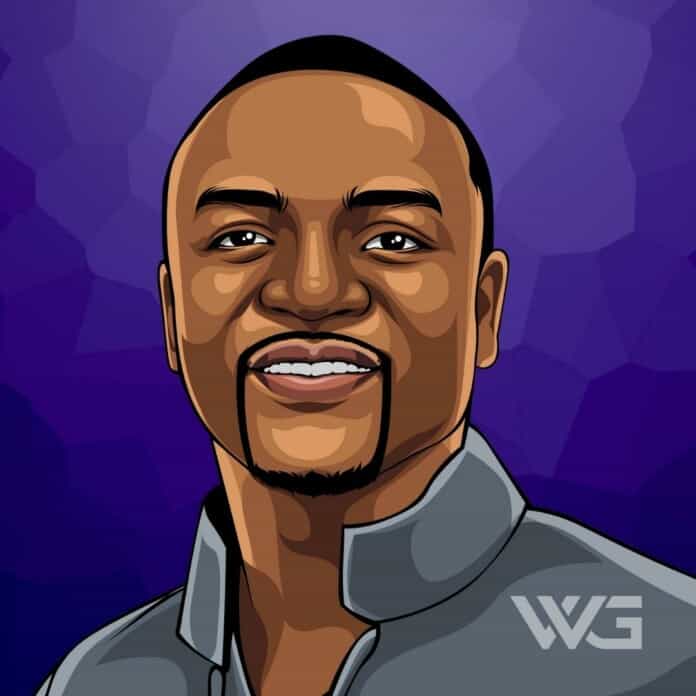 What is Akon’s net worth?

As of February 2023, Akon’s net worth is estimated to be roughly $60 Million. Aliaume Damala Badara Akon Thiam, better known as “Akon”, is an American songwriter, singer, businessman, record producer, and actor.

Akon was born in St. Louis, Missouri on the 16th of April, 1973. He spent much of his childhood in the African country Senegal which he describes as his “hometown”.

Akon learned to play several instruments; such as drums, guitar, and djembe.

At the age of 7, Akon moved with his family to New Jersey. During his teen years, he had trouble has difficulties getting along with other children.

When he and his older brother reached high school, his parents left them on their own in Jersey City.

What is Akon’s net worth?

As of February 2023, Akon’s net worth is estimated to be $60 Million. Akon began his music career in 2004 when he released his debut album ‘Trouble’. The album was a huge success and produced multiple hit singles such as ‘Locked Up’, ‘Bananza’, ‘Ghetto’ and ‘Lonely’.

After the big success of his first album, he started his own record labels ‘Kon Live Distribution’ and Konvict Muzik’.

Akon has collaborated with the famous music geniuses such as Whitney Houston, Lionel Richie, and Gwen Stafani. Akon co-wrote Lady Gaga’s debut single ‘Just Dance’, and he also sang a duet ‘Hold My Hand’ with the legendary pop-star, Michael Jackson.

In 2016 along with Jeff chang he appeared in the Chinese reality TV show ‘I Am a Singer’.Akon is also the founder of the Konfidence Foundation whose main motive is to empower the youth of Africa and the US.

Here are some of the best highlights of Akon’s career:

“Whatever obstacle comes your way, you gotta be prepared to jump over it! And I think that’s what separates the legends from the regular artists. It’s all in how you manage that success, and how you deal with the controversy when it actually comes.” – Akon

“That’s my actual payment, the fact that I can actually make something that I actually enjoy and put on repeat, and it’s not related to anything else or anyone else’s thoughts and ideas, it all came from me; I just love that aspect of it.” – Akon

“Any album that you pick up of mine, you know it’s an Akon album. The guests are very limited, and you get to really feel the experience. You get the Akon experience when you get the albums. I always want to make sure that stays the way it is. Don’t want to flood the album to where you lose focus on why you bought it.” – Akon

“I always feel like ‘as long as I’m doin’ what I love to do, the money’s naturally gonna come.’ When you start thinkin’ business and you start thinkin’ ‘What’s hot? What’s the wave? Who is hot? Let’s get at that person,’ it becomes a point where you’re tryin’ to strategize to make money. And that’s always a gamble.” – Akon

“While I’m here, I’m gonna milk it for all I can, so when I’m no longer hot – and I know that day is coming – I will step over here and enjoy everything I’ve created up to this point. The music is just opening all these doors, so I can relax.” – Akon

View our larger collection of the best Akon quotes!

Now that you know all about Akon’s net worth, and how he achieved success; let’s take a look at some of the lessons we can learn from him:

1. Difference between dreams and success

Dreams need effortless sleep and success needs sleepless efforts. Never give up on your dreams, in place to work towards your success.

Whatever obstacle that comes in your way, you have to be prepared. It’s all about how you manage that success, and how you deal with the controversy when it actually comes.

How much is Akon worth?

Akon’s net worth is estimated to be $60 Million.

How old is Akon?

How tall is Akon?

Akon has been one of the most popular music icons in many decades. He has worked with some of the best producers and has sold millions of copies of his music worldwide.

As of February 2023, Akon’s net worth is roughly $60 Million, making him one of the richest R&B singers.

What do you think about Akon’s net worth? Leave a comment below.