The latest collection of quotes we’re featuring on Wealthy Gorilla, are the greatest Michael Jordan quotes of all time.

Take a look below and if you like them, please help us out by sharing this page on your social media!

1. “I’ve missed more than 9000 shots in my career. I’ve lost almost 300 games. 26 times, I’ve been trusted to take the game winning shot and missed. I’ve failed over and over and over again in my life. And that is why I succeed.” – Michael Jordan

2. “Some people want it to happen, some wish it would happen, others make it happen.” – Michael Jordan

3. “If you run into a wall, don’t turn around and give up. Figure out how to climb it, go through it, or work around it.” – Michael Jordan

5. “I can accept failure, everyone fails at something. But I cannot accept not trying.” – Michael Jordan

6. “My attitude is that if you push me towards something that you think is a weakness, then I will turn that perceived weakness into a strength.” – Michael Jordan

7. “I’ve always believed that if you put in the work, the results will come.” – Michael Jordan

8. “To be successful you have to be selfish, or else you never achieve. And once you get to your highest level, then you have to be unselfish. Stay reachable. Stay in touch. Don’t isolate.” – Michael Jordan

9. “You have to expect things of yourself before you can do them.” – Michael Jordan

10. “Sometimes, things may not go your way, but the effort should be there every single night.” – Michael Jordan

11. “Ultimately, if you can say that I’m a bad owner and we’re winning championships, I can live with that. But if we’re not making the playoffs and we’re spending and losing money, then I have to look in the mirror and say maybe I’m not taking the necessary steps to doing what it takes to run an organization.” – Michael Jordan

13. “In college I never realized the opportunities available to a pro athlete. I’ve been given the chance to meet all kinds of people, to travel and expand my financial capabilities, to get ideas and learn about life, to create a world apart from basketball.” – Michael Jordan

14. “I play to win, whether during practice or a real game. And I will not let anything get in the way of me and my competitive enthusiasm to win.” – Michael Jordan

15. “I’m not out there sweating for three hours every day just to find out what it feels like to sweat.” – Michael Jordan

16. “I want to wake up every day and do whatever comes in my mind, and not feel pressure or obligations to do anything else in my life.” – Michael Jordan

17. “My challenge when I came back was to face the young talent, dissect their games, and show them maybe that they needed to learn more about the game than just the money aspect.” – Michael Jordan

18. “I want people to understand, gambling is not a bad thing if you do it within the framework of what it’s meant to be, which is fun and entertaining.” – Michael Jordan

20. “I’d like to be settled into somewhat of a normal life. Somewhat. I know it’s never going to be completely normal.” – Michael Jordan

21. “I believe greatness is an evolutionary process that changes and evolves era to era.” – Michael Jordan

23. “If you quit once it becomes a habit. Never quit!” – Michael Jordan

25. “The minute you get away from fundamentals – whether it’s proper technique, work ethic or mental preparation – the bottom can fall out of your game, your schoolwork, your job, whatever you’re doing.” – Michael Jordan

27. “It’s heavy duty to try to do everything and please everybody. My job was to go out there and play the game of basketball as best I can. People may not agree with that. I can’t live with what everyone’s impression of what I should or what I shouldn’t do.” – Michael Jordan

28. “You can practice shooting 8 hours a day, but if your technique is wrong, then all you become is very good at shooting the wrong way. Get the fundamentals down and the level of everything you do will rise.” – Michael Jordan

29. “You have competition every day because you set such high standards for yourself that you have to go out every day and live up to that.” – Michael Jordan

30. “Sometimes you need to get hit in the head to realize that you’re in a fight.” – Michael Jordan

31. “I hope the millions of people I’ve touched have the optimism and desire to share their goals and hard work and perseverance with a positive attitude.” – Michael Jordan

32. “I built my talents on the shoulders of someone else’s talent.” – Michael Jordan

33. “My challenge when I came back was to face the young talent, to dissect their games, and show them maybe that they needed to learn more about the game than just the money aspect.” – Michael Jordan

34. “For a competitive junkie like me, golf is a great solution because it smacks you in the face every time you think you’ve accomplished something. That to me has taken over a lot of the energy and competitiveness for basketball.” – Michael Jordan 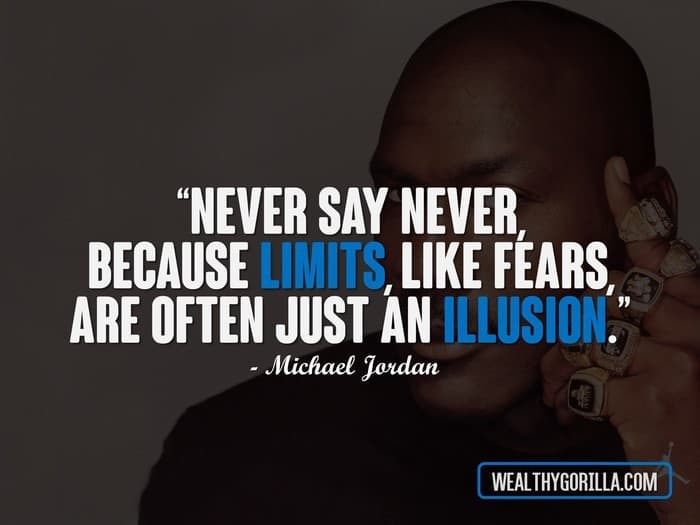 Thanks for checking out this collection of the best Michael Jordan quotes! Don’t forget to share them on social media.

Which are your favorite Michael Jordan quotes? Leave a comment below.