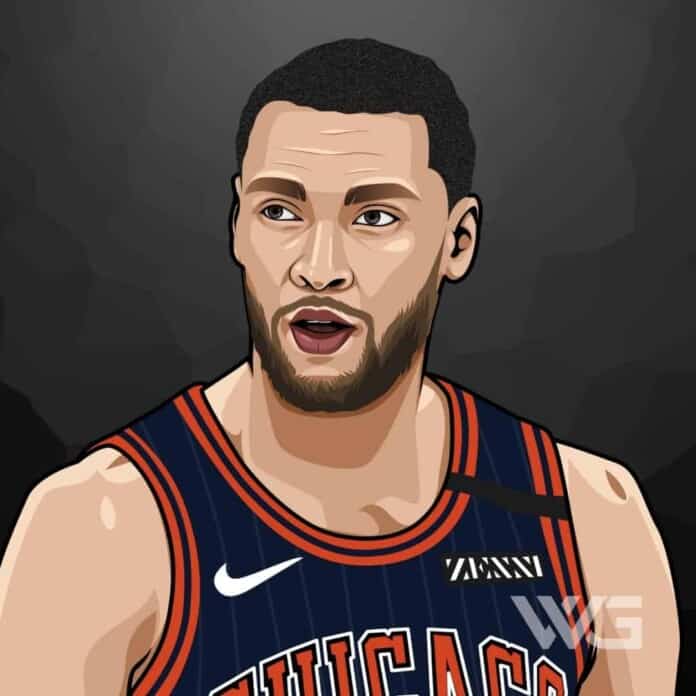 What is Zach LaVine’s net worth?

Zach LaVine is an American professional basketball player for the Chicago Bulls of the NBA.

LaVine was selected in the first round of the 2014 NBA draft with the 13th overall pick by the Timberwolves. He is a two-time Slam Dunk Contest champion.

As of December 2022, Zach LaVine’s net worth is estimated to be‎ $3 Million.

Zachary LaVine was born on the 10th of March, 1995, in Renton, Washington.

During his senior years in high school, LaVine displayed extraordinary capabilities in basketball. In 2013, he was named the ‘Associated Press Washington State Player of the Year.’ He won the ‘Washington Mr. Basketball’ title, too.

In 2013, LaVine participated in the ‘Ballislife All-American Game,’ which is an annual all-star game for high-school basketball players. He won the ‘Slam Dunk Contest’ in this game. The same year, he was ranked twelfth as a ‘shooting guard’ and forty-fourth in the entire nation.

The following year, LaVine declared himself eligible for the ‘NBA Draft.’ He gave up three years of his college, to be featured in the draft. In June 2014, LaVine was selected by the ‘NBA’ team ‘Minnesota Timberwolves,’ as the thirteenth overall pick.

He scored 35 points against the ‘Oklahoma City Thunder in 2016.’ During the ‘2016 All-Star Weekend,’ LaVine scored 30 points for the ‘Team USA’ in the ‘Rising Stars Challenge.’

Here are some of the best highlights of Zach LaVine’s career:

“I remember when I was in third grade, I was in a classroom, and the teacher said, ‘What do you want to do when you get older?’ We were going around the room. I said, ‘I want to be a professional basketball player.’ She’s like, ‘That’s not realistic.’ I thought to myself, ‘OK, watch.” – Zach LaVine

“While taking sign language in high school, one of our assignments was to go out and participate in the deaf community, so I really got to know a lot of the group from that. I felt like they needed a little bit more of a voice because people treat them differently just because they’re hearing impaired.” – Zach LaVine

“When I was younger, me and my dad used to do different things. I don’t think I would call it community service. It was more just us doing nice things. We used to donate to Goodwill or do can drives. Give people money if they needed it. Little things like that.” – Zach LaVine

“My main thing is I’m going to compete on every play, try to be focused on both ends of the court. That said, I’ll always bring my excitement, my swag, to the game.” – Zach LaVine

Now that you know all about Zach LaVine’s net worth, and how he achieved success; let’s take a look at some of the lessons we can learn from him:

You have to communicate with your teammates; you have to be on a string. There are a lot of things that go into play. And then you are guarding a two or three, which is probably one of their better players on the team, so you’re focused on them.

There are a lot of critics out there, a lot of people that you want to prove wrong. But that’s what your hard work is for in the offseason, spending hours and hours in the gym.

There are going to be good days and bad days… and you have to learn to fight through that.

How much is Zach LaVine worth?

Zach LaVine’s net worth is estimated to be $3 Million.

How old is Zach LaVine?

How tall is Zach LaVine?

Zach LaVine is an American professional basketball player who was drafted #13 by the Minnesota Timberwolves in the 2014 NBA Draft and has played for Minnesota his entire NBA career.

As of December 2022, Zach LaVine’s net worth is approximately $3 Million.

What do you think about Zach LaVine’s net worth? Leave a comment below.