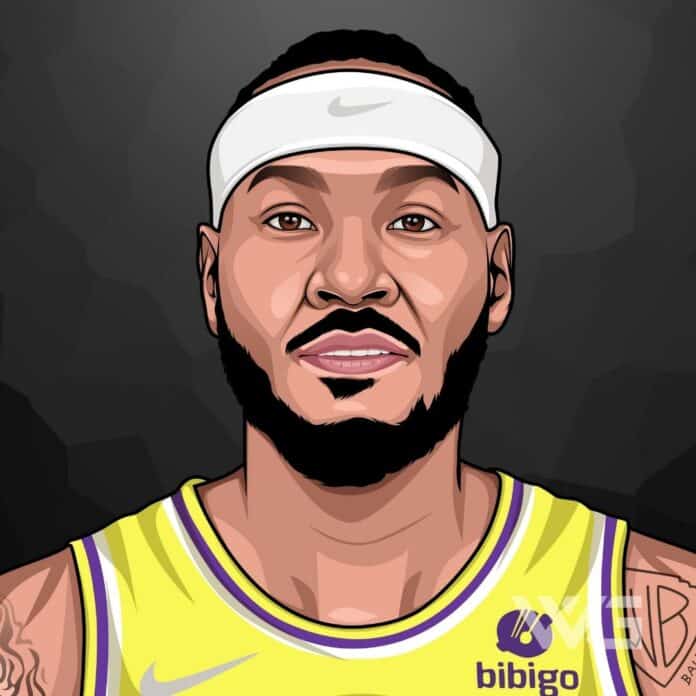 What is Carmelo Anthony’s net worth?

Ranked as one of the greatest players in NBA history and one of the best scorers, Carmelo Anthony has earned a huge net worth for his talents.

While he has been playing for decades, Anthony is still going strong and earning millions every year.

As of November 2022, Carmelo Anthony’s net worth is estimated to be $160 Million.

Carmelo’s father, Iriarte, died of cancer when he was only 2, and his family moved to Baltimore when he was 8, where he later attended Towson Catholic High School.

During his senior year, Anthony transferred to Oak Hill Academy, where he attracted NBA attention when he scored an average of 25.2 points per game.

At the USA Basketball Youth Development Festival, he earned the silver medal, tying LeBron James with 24 points per game, which caused the pair to strike up a friendship.

After high school, Anthony chose to attend Syracuse University, where he played for the Syracuse Orange for the 2002-2003 season.

While he planned on staying with Syracuse for three seasons, he left his college basketball career in 2003 for the NBA draft, where he ended up being selected by the Denver Nuggets.

Anthony spent the first seven years of his NBA career with the Denver Nuggets, having been chosen as their third pick behind LeBron James and Darko Milicic.

While playing for the Nuggets, Anthony led them to the playoffs every year from 2004 to 2010, in addition to two division titles.

In 2011, Anthony was traded to the New York Knicks, one of the richest NBA teams, earning a career-high 62 points in a single game in 2014.

He continued to play for the Knicks until 2017 before signing with the Oklahoma City Thunder for a single season.

Anthony signed a one-year contract with the Houston Rockets in 2018 but missed the last three games of the season due to illness.

The Houston Rockets traded him in 2019 to the Atlanta Hawks, and he also played with the Chicago Bulls during the same season.

For the 2019-2020 season, Anthony played for the Portland Trail Blazers, where he scored a season-record of 32 points in a single game against the Detroit Pistons.

In 2021, Anthony signed with the Los Angeles Lakers, whom he still plays for today.

As one of the richest NBA players in the world, it’s safe to say that Carmelo Anthony has earned a substantial amount of wealth.

Although we don’t have all of the details about his annual earnings, we do know a bit about how much he’s made throughout his career.

While he may not be as rich as Michael Jordan or Magic Johnson, Carmelo Anthony has certainly earned a net worth that most basketball players could only dream of.

In 2010, Anthony and Alani married at Cipriani’s in New York City, and VH1 filmed the ceremony to use in their reality series La La’s Full Court Wedding.

After the 2016-2017 season, TMZ reported that Alani had moved out of the couple’s shared apartment and was living separately, which led to her filing for divorce in 2021.

Carmelo Anthony has won many games throughout his life and won some significant awards.

While we can’t cover all of his accolades, we can point out some of the most substantial.

Here are some important awards and achievements from Carmelo Anthony’s career:

Aside from being just a talented NBA player, Carmelo Anthony is also a gold medal Olympian, which is something that helps set him apart from others on the court.

How Does Carmelo Anthony Spend His Money?

Carmelo Anthony has a lot of money, and he isn’t afraid to spend it.

Along with his expensive homes, Anthony has also given a lot of money to various charities and institutions, including $1.5 million to the Living Classrooms Foundation, $3 million to Syracuse University for their basketball program, and $35k to relief efforts following the Indian Ocean earthquake in 2004.

Carmelo Anthony has reached many milestones throughout his career, but some have been more significant than others.

From the first time he stepped onto the court to the Olympics, Anthony has experienced a lot of success.

Here are some of the best highlights of Carmelo Anthony’s career:

Carmelo has achieved a lot throughout his career, and he is still going strong today.

Carmelo Anthony is one of the most inspirational NBA players, and he’s always willing to share encouragement when necessary.

Anthony has shared loads of great advice during his interviews, but some have stood out more than others.

Here are our favorite quotes from Carmelo Anthony:

There is a lot that we can learn about success from this NBA legend.

Now that you know all about Carmelo Anthony’s net worth, we can look specifically at what he can teach us about reaching our own goals.

Here are some of the best success lessons to learn from Carmelo Anthony:

1. Surround Yourself With Support

When trying to become successful, surrounding yourself with people who will support you can be crucial.

Not only will it give you people to rely on when you need help, but it can give you access to a great source of motivation.

2. Make Your Dreams A Reality

Everyone has dreams, but if you don’t work hard to pursue them, you’ll never be able to make them come true.

Although some lofty goals can be more difficult to achieve than others, if you don’t keep trying, you’ll have already failed to achieve them.

If you want to be successful, you’ll have to be bold and make big decisions.

While it can be difficult to find your confidence at first, it is a skill that can be incredibly vital.

Carmelo Anthony is a professional basketball player who has earned a huge net worth for his skills on the court.

While he has been playing for a long time, he has shown no signs of retiring any time soon, so it is likely his fortune will continue to grow.

Make sure to check back often to stay up-to-date on any changes impacting Carmelo Anthony’s net worth.

As of November 2022, Carmelo Anthony’s net worth is estimated to be $160 Million.

What do you think about Carmelo Anthony’s net worth? Leave a comment below.