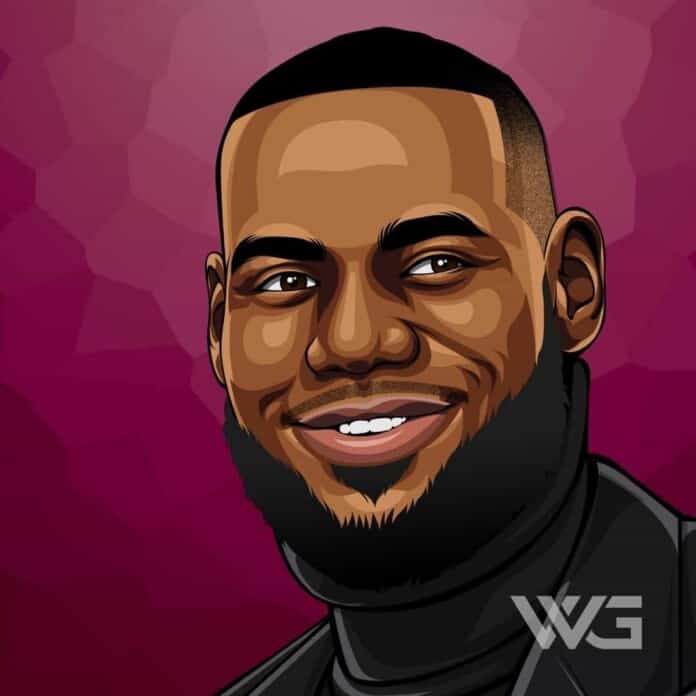 What is LeBron James’ net worth?

LeBron James is a professional American basketball player in the NBA. He currently plays for the Cleveland Cavaliers, and he has been heralded as one of the best players in basketball history, next to no other than the great Michael Jordan.

LeBron has won several NBA championships and multiple MVP awards in his career, earning himself the nickname “King James.” Besides that, he’s also written books, starred in movies and TV shows, owned restaurants and clubs, and created a foundation that’s given millions of dollars to help kids across America receive a better education.

His work ethic is legendary. LeBron once told NBA fans that he doesn’t want to be remembered as just a great basketball player; he wants them to remember him as someone who made an impact on the world.

And by all accounts, it looks like Lebron will be remembered as such—as one of the greatest athletes and people of all time.

Lebron James is one of the best-known basketball players in the world. He was born on December 30, 1984, in Akron, Ohio, to Gloria Marie James and Anthony McClelland. His mother and father were just 16 and 20 years old, respectively. They had Lebron when they were in high school.

The couple never married, and when Lebron was growing up, he lived with his mother, who had to work multiple jobs to support them both.

Eventually, she decided to let LeBron live with a local youth football coach, Frank Walker. This allowed LeBron to live a much more stable life, and Frank was the individual who introduced him to basketball.

In high school, he played for St Vincent-St Mary High School in Akron. He was recognized as the best basketball player in his class. His team won three state championships, and he was named Mr. Basketball of Ohio three times. He won a national championship during his junior year in 2002.

In 2003, James was chosen as the overall pick of the NBA Draft by the Cleveland Cavaliers. He was the youngest player to ever be picked first in an NBA draft at the time and is only one of two players to ever be drafted straight out of high school.

His first season was incredible, setting a new NBA record for the most points scored by the prep-to-pro player in his first game. He was also named Rookie of the Year.

Within the next few seasons, LeBron rose to stardom, being featured in his first All-Star Game and winning multiple Most Valuable Player awards.

In June 2010, LeBron announced that he would leave Cleveland and sign with the Miami Heat for a six-year deal worth $110 million. The decision was televised by ESPN on an hour-long special entitled ‘The Decision.’

In his first season in Miami, James helped the Heat reach the NBA Finals, where they lost to the Dallas Mavericks in six games. The following year, he won his first NBA championship as the Heat defeated the Oklahoma City Thunder in five games. In 2013, James received his fourth NBA Most Valuable Player Award. He won a second consecutive championship in 2013 as the Heat defeated the San Antonio Spurs in seven games.

He played at Miami Heat for four seasons, and in 2014 Lebron James decided to go back to Cleveland Cavaliers. Cavaliers won the NBA championship in 2016 and 2017 with Lebron James as their leading scorer.

It was until 2018 that LeBron left the Cavaliers and joined the Los Angeles Lakers as a free agent, signing a four-year contract worth $154 million. James has won far too many awards to list, but you can see some of his best highlights below.

As of February 2023, LeBron James’ net worth is now an astonishing $600 Million.

The Lakers star reportedly signed a three-year deal with the company that will pay him approximately $30 million to promote the service on social media platforms such as Snapchat and Twitter.

LeBron also has business ventures that include Liverpool FC (a small stake), Blaze Pizza (his part ownership helped make it a billion-dollar brand), and Uninterrupted – a digital media company that he founded.

LeBron also owns production companies SpringHill Entertainment and The Robot Company, through which he has produced films like Space Jam 2 starring himself alongside Bugs Bunny; TV shows such as Survivor’s Remorse; documentaries like I Promise; commercial spots for Sprite soda; YouTube content and more.

In addition to his off-court earnings from endorsements, business ventures, investments, and production companies, King James is also known for his philanthropy efforts. In 2017 he pledged to provide scholarships for kids who graduate from the I Promise School in Akron, Ohio, through his LeBron James Family Foundation.

Here are some of the major highlights from LeBron James’ career:

“My mom and I have always been there for each other. We had some tough times, but she was always there for me.” – LeBron James

“I don’t know how tall I am or how much I weigh. Because I don’t want anybody to know my identity. I’m like a superhero. Call me Basketball Man.” – LeBron James

“Being the only man in the household with my mom definitely helped me grow up fast.” – LeBron James

View our larger collection of the best LeBron James quotes!

3 Keys to Success from LeBron James

Now you know all about LeBron James’ net worth and how he achieved success; here are three success lessons we can all learn from LeBron James:

Dwyane Wade and Pat Riley played a big part in teaching LeBron how to become a true champion. This was midway through his career when he left for Miami Heat. His reason for leaving Cleveland was exactly this, to learn.

When LeBron moved back to Cleveland, he had a much wider range of knowledge, which he could bring back to the team.

2. Be A Great Leader

LeBron is all about teamwork and helping his team in any way he can to break the boundaries. He’s not in it for himself; he’s in it for the team. This is majorly why the teams he’s played in have done so well and therefore improved his level of fame.

However, LeBron knows that being famous doesn’t mean anything if you can’t help others with that fame. He’s been working to make a difference since Day One of his NBA career and continues to do so today as one of the leaders in the fight against racism.

3. Learn from Past Mistakes

If he had to do it all over again, James said there were plenty of things he’d do differently. That just goes to show how much he’s learned from his mistakes and how it’s helped continuously elevate his game throughout his career.

How much is LeBron James worth?

LeBron James’ net worth is estimated to be $600 Million.

How old is LeBron James?

How tall is LeBron James?

LeBron James is, without a doubt, one of the best NBA players in history, and all the attention/awards he’s received show this. With LeBron James’ net worth at a whopping $600 Million, he’s also one of the highest-paid athletes in the world.

However, it’s his influence on the game of basketball that has made him such a legend among an entire generation of players and fans. LeBron is much more than just “King James.” He’s a cultural icon and a national hero. He’s even a celebrity outside of basketball, but none of this would be possible if LeBron hadn’t taken on the responsibility to improve himself and evolve as a player and person throughout his illustrious career.

He’s a real inspiration for any aspiring athlete, proving that with hard work and dedication, you can overcome any obstacle that life throws at you.

What do you think of LeBron James’ net worth? Leave a comment below.

What is Jeffree Star's net worth? Introduction As of ,...