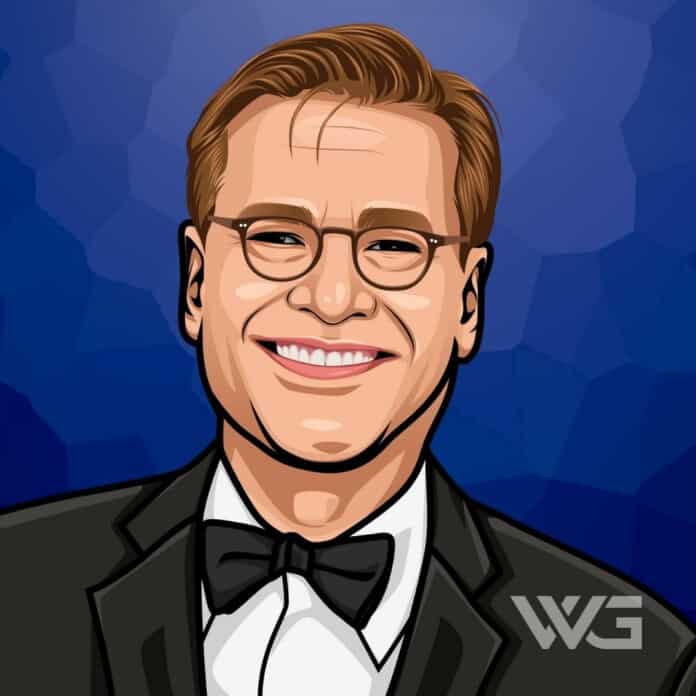 What is Aaron Sorkin’s net worth?

Aaron Sorkin is an American director, screenwriter, and producer.

Sorkin developed a passion for writing at an early age. His works include ‘A Few Good Men,’ ‘The Farnsworth Invention, ‘To Kill a Mockingbird, ‘Sports Night,’ ‘The West Wing,’ and ‘Studio 60 on the Sunset Strip’. He has written screenplays for ‘A Few Good Men,’ The American President,’ ‘Charlie Wilson’s War,’ and ‘Steve Jobs.’

Aaron Benjamin Sorkin was born on the 9th of June, 1961, in Manhattan, New York.

Sorkin was born to a Jewish family and was raised in the New York suburb of Scarsdale. Sorkin took an early interest in acting. Growing up, his parents took him to the theatre to see different shows.

Sorkin attended Scarsdale High School, and in the eighth grade, he played General Bullmoose in a musical called ‘Li’l Abner.’ At Scarsdale High, he served as vice president of the drama club.

After working with different jobs such as delivering singing telegrams and driving a limousine, he started to write on his first play, ‘Removing All Doubt.’

After the success with ‘A Few Good Men,’ Brown got interested in making it to a movie. The film was released in 1992 starring Tom Cruise, Jack Nicholson, and Demi Moore.

Sorkin wrote the screenplay for the movie ‘Malice,’ released in 1993, and starred Alex Baldwin and Nicole Kidman. He conceived the idea to write about behind the scenes on a sports show. ‘Sports Night’ debuted in 1998.

He returned to screenwriting when he adapted ‘Charlie Wilson’s War’ in 2007. The movie was released the same year and earned five nominations at the Golden Globes.

The following year, he won his first Oscar for his screenplay for the movie ‘The Social Network.’ A year later, Sorkin received nominations for more awards for his work on ‘Moneyball.’ The film starred Brad Pitt, Jonah Hill, and Philip Seymour Hoffman.

In 2015, Sorkin wrote the screenplay for ‘Steve Jobs’ for which he won a Golden Globe for. In 2020, he wrote and directed ‘The Trial of Chicago 7’.

How Does Aaron Sorkin Spend His Money?

Aaron Sorkin is known for his successful films. He spends his money on real estate and in supporting different charities.

Sorkin owns an incredible home in Beverly Hills. He purchased the home in 2005 for $5 million. In 2008, he purchased another home in the Hollywood Hills for $6.1 million.

Here are some of the best highlights of Aaron Sorkin’s career:

“When you’re writing a movie or a play and writing isn’t going well, which is for me the normal condition – it’s an exceptional day when suddenly I’ve got something, and it’s going well – you can call the studio or the producer or whoever is waiting for it and say, “I know I said I was going to have it in by the end of the summer.” – Aaron Sorkin

“If you close your eyes you can imagine the hackers sitting in a room, combing through the documents to find the ones that will draw the most blood. And in a room, next door are American journalists doing the same thing. As demented and criminal as it is, at least the hackers are doing it for a cause. The press is doing it for a nickel.” – Aaron Sorkin

“If you can socialize from the privacy of your desk at night in a dark room, you can be a smoother, cooler, funnier, sexy, more everything person than you actually are in real life.” – Aaron Sorkin

“Honestly, I don’t try to guess at what most people want. I don’t think I’d guess right, and I think that’s not a good recipe for storytelling. I try to write what I like, what I think my friends would like.” – Aaron Sorkin

“There are television critics, movie critics, and theater critics too who I like and who I follow and I get genuinely bummed when they don’t like something that I’ve written because I usually agree with them.” – Aaron Sorkin

Now that you know all about Aaron Sorkin’s net worth and how he achieved success let’s take a look at some of the lessons we can learn from him.

Good writers borrow from other writers. Great writers steal from them outright.

If you feel that strongly about something, you have an obligation to try and change anyone’s mind.

How much is Aaron Sorkin worth?

Aaron Sorkin’s net worth is estimated to be $90 Million.

How old is Aaron Sorkin?

How tall is Aaron Sorkin?

Aaron Sorkin is an American screenwriter, producer, and director who is famous for writing many successful films, television series, and plays.

Sorkin is best known for the critically acclaimed TV series ‘The West Wing,’ which ran on NBC between 1999 to 2006. His other credits include ‘Moneyball,’ ‘The Newsroom,’ ‘Steve Jobs,’ and ‘Sports Night.’

What do you think about Aaron Sorkin’s net worth? Leave a comment below.