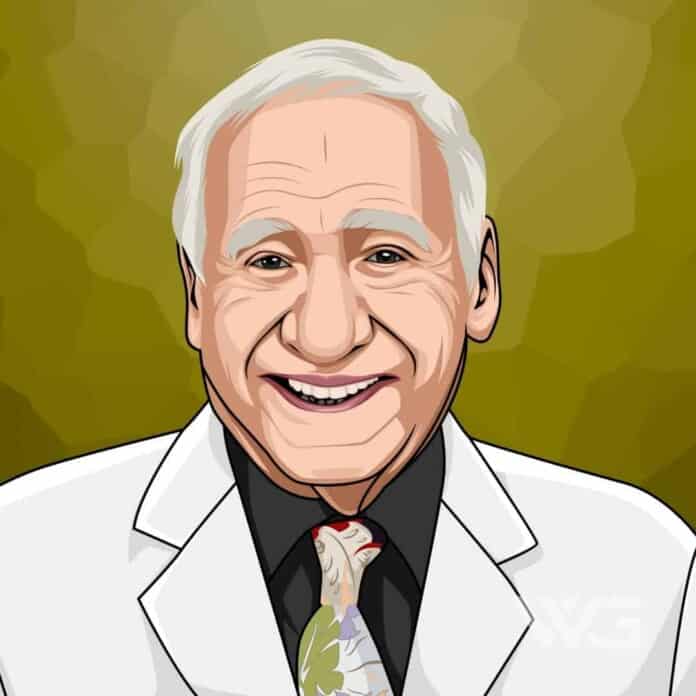 What is Mel Brooks’ net worth?

Mel Brooks is an American filmmaker, actor, comedian, and composer from New York.

He is known as a creator of broad film farces and comedic parodies. Together with Carl Reiner, he created the comic character The 2000 Year Old Man.

Mel Brooks was born on the 28th of June, 1926, in Brooklyn, New York. His father died of a Kidney disease when Brooks was only 2.

Brooks used to get bullied by other boys when he was young as he was of a small build. He went to Abraham Lincoln High School and attended Eastern District High School and Brooklyn College.

After his stint in the World War II, Brooks played piano at the Borscht Belt resorts and started working as a stand-up comedian and did some comic radio work as well. He eventually became the master entertainer at the Grossinger’s.

In 1954, Brooks wrote for another of Caesar’s shows called ‘Caesar’s Hour’ along with the same writing cast from ‘You Show of Shows’. It ran for 3 years and by the end of it Brooks wrote ‘Shinbone Alley’, his first Broadway musical.

In 1972, Brooks signed a deal with Warner Brothers to re-write the script of what was then known as ‘Tex-X’. He was later hired as the director of the movie and it was called ‘Blazing Saddles’.

In 1983, Brooks produced and starred in the remake of Ernst Lubitsch film ‘To Be or Not to Be’. It was directed by Alan Johnson. Brooks played the role of ‘Hitler’ in the movie; it was a satire on Germany during WW II.

In 2000s, he appeared on the TV in ‘The Simpsons’, ‘Mad About You’, ‘Curb Your Enthusiasm’, ‘Comedians in Cars Getting Coffee’, etc. He also did cameos in movies like: ‘It’s a Very Merry Muppet Christmas Movie’, etc.

Here are some of the best highlights of Mel Brooks’ career:

“When I was a little kid, if somebody said they were thirty-five, I’d say “Oooh, they’re going to die soon”. But as I get older it doesn’t mean a thing. You mustn’t ever give in. Never give in to thinking you’re old because you’re never old. Your mind, and I tell you this and listen to me carefully, your mind is never, ever old, it’s eternally young.” – Mel Brooks

“Let’s have a merry journey, and shout about how light is good and dark is not. What we should do is not future ourselves so much. We should now ourselves. “Now thyself” is more important than “know thyself.” The reason is what tells us to ignore the present and live in the future. So all we do is make plans. We think that somewhere there are going to be green pastures. It’s crazy. Heaven is nothing but a grand, monumental instance of the future. Listen, now is good. Now is wonderful.” – Mel Brooks

“Never retire! Do what you do and keep doing it. But don’t do it on Friday. Take Friday off. Friday, Saturday, and Sunday go fishing…Then Monday to Thursday, do what you’ve been doing all your life. My point is: Live full and don’t retreat.” – Mel Brooks

“In real life people fart, in the movies, people don’t. Why not? Farts are a repressed minority. The mouth gets to say all kinds of things, but the other place is supposed to keep quiet. But maybe our lower colons have something interesting to say. Maybe we should listen to them. Farts are human, more human than a lot of people I know. I think we should bring them out of the water closet and into the parlor.” – Mel Brooks

“Feeling different, feeling alienated, feeling persecuted, feeling that the only way to deal with the world is to laugh – because if you don’t laugh you’re going to cry and never stop crying – that’s probably what’s responsible for the Jews having developed such a great sense of humor. The people who had the greatest reason to weep learned more than anyone else how to laugh.” – Mel Brooks

Now that you know all about Mel Brooks’ net worth, and how he achieved success; let’s take a look at some of the lessons we can learn from him:

Although his career took a different turn from following in his famous instructor’s shoes, he never stopped drumming and has always credited the skill as, uh, instrumental in making him a better filmmaker.

Whether you’re writing a joke or a whole movie full of them, you have to start with the foundation. For the joke that’s a set up, while in a script that’s a buildup of back story, character development, and the world it all takes place in.

Every filmmaker wants final cut on their movies, that’s obvious. It’s also not always as easy as just making the request. Brooks is one of those people who made a lot of money for a lot of people early on and got to have that luxury going forward.

How much is Mel Brooks worth?

Mel Brooks’ net worth is estimated to be $100 Million.

How old is Mel Brooks?

How tall is Mel Brooks?

Mel Brooks is one of the few artists in Hollywood who has received Emmy, Grammy, Oscar and Tony Awards.

He recently received AFI Life Achievement Award and three of his films are ranked in the American Film Institute’s list of the top 100 comedy films of all-time.

What do you think about Mel Brooks’ net worth? Leave a comment below.