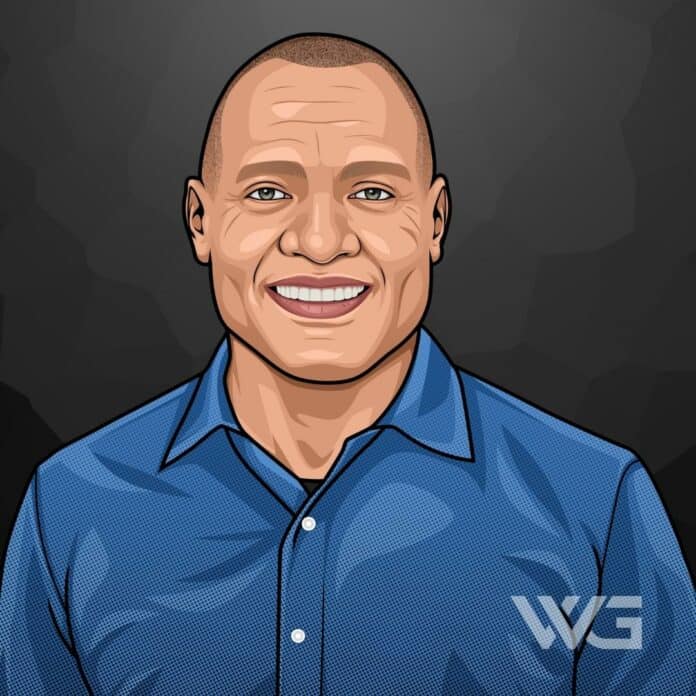 What is Aeneas Williams’ net worth?

Aeneas Williams only started playing football seriously in his junior year at university, yet he became one of the most celebrated NFL players ever.

He dominated the football field and became an inspiration for millions of fans and his fellow players throughout the 14 seasons on the gridiron.

Even after retirement, Aeneas continues to spread his motivational message through speaking engagements across America.

As of December 2022, Aeneas Williams’ net worth is estimated to be $50 Million.

He was the youngest of three brothers and, being the youngest, he undertook the role of being the superstar of the family. Aeneas attended Alcee Fortier High School, where he quickly discovered his ability and passion for football.

His parents, Lawrence and Lilian Williams, were serious about instilling education into their kids. This resulted in Aeneas’ first career goal being to get a great college education and end up as an accountant until he found football.

He wasn’t the only superstar on his high school football team, as three of his fellow teammates also became NFL players in the future. His fellow NFL teammates are Ashley Ambrose, Maurice Hurst, and Kevin Lewis, who led their high school team to a record 10 undefeated games.

Despite his impressive experience, Aeneas wasn’t offered a scholarship after graduating. Because of this, he attended Southern University and decided to focus on his studies so he wouldn’t make the same mistake again, choosing to focus on his academics because of his parents’ concerns.

Eventually, he joined the university’s team as a walk-in and continued to do so up until he was able to improve his drafting status. During this period, he had already broken the record for 11 interceptions in Division I-AA within the first year of joining the football team.

He earned a Bachelor’s in Accounting and stayed on the team as a graduate student, managing a college career total of 20 interceptions.

His decision to follow football as a career allowed him to join the ranks of the richest NFL players and was described by Aeneas as a religious experience. He joins players like Brett Favre, Sam Bradford, and Antonio Brown who have become wealthy by playing football.

His hard work paid off and finally got him a place with the Arizona Cardinals in 1991.

He had successful seasons with the team and had landed himself six appearances in the Pro Bowl. He also helped the team win their first playoff since 1947.

During his seasons with the Arizona Cardinals, he tied for the NFC lead and the league lead in 1994 with nine interceptions. He was also named NFC Defensive Rookie of the Year and became known as the Cardinal’s top cornerback.

The first season with his new team went well until Aeneas lost motivation during a rather dull season and lost a game to the New England Patriots in 2004.

Following a bad injury, he retired from football in 2005, finishing his career with a total of 207 starts and 211 regular-season games.

After retirement, Aeneas became the pastor and founder of Spirit Church. He continues to spread his words throughout America and has released a book titled “It Takes Respect”, where he discusses his views on success.

Aeneas Williams became an indispensable part of his team’s defensive plays, earning a huge salary for his impressive form on the field.

Following his retirement, he founded the Spirit Church, taking his word to the faithful and earning a huge amount of money as well.

After being so successful on the pitch, and with his background in finances, Aeneas proved adept at investing his money and increasing his wealth.

With a solid financial nest egg from his impressive football career, Aeneas was able to create an impressive fortune by investing in a motor dealership and by helping people through his church.

Through his business skills and savvy investments, we are sure that Aeneas will continue to prosper as he builds his empire.

Here’s a breakdown of Aeneas Williams’ annual net worth:

We’re sure that with his accounting and business background as well as a strong work ethic, Aeneas’ businesses and investments will continue to reap the rewards he’s worked so hard to achieve.

Aeneas is married to his wife, Tracy Williams, and the couple has three children; Cheyenne, Tirzah, Lazarus, and his daughter Saenea, whose name is her father’s name spelled backward.

He founded St. Anne church along with his wife after he retired from his career on the football field.

You can follow along with the family and see what Aeneas is doing by visiting his official church website for the latest news.

Right from the start of his football career, Aeneas has been a top performer.

This is reflected in his results from his rookie year and the accolades that have followed him throughout the seasons.

Here are some of the more memorable moments from Aeneas Williams’ career:

Aeneas’ contribution to the success of his team was never in question and both his coaches and fellow teammates were full of praise for his heroic efforts.

How Does Aeneas Williams Spend His Money?

Aeneas is known for his charity work, not only through his church but for holding fundraisers to spread awareness.

Aeneas and his wife decided to move the church, with the project valued at over $5 million.

Aeneas invested a large part of his fortune in the automotive company, The Williams Group. The company purchased Monroe Auto World, which consisted of Mercury, Lincoln, Chrysler, and Plymouth franchises.

The group sell some of the most expensive cars in the world and sold its Chrysler brand for $45 million in 2006, making a huge return on their investment.

Aeneas came into his own during the 1990s, being selected for the All-decade team.

While his position as a defensive player was not quite as interesting as the attacking players, a good defense allows the attack to win games.

Here are some of the best highlights of Aeneas Williams’ career:

As a defensive tackle, Aeneas did most of his work on the field away from the headline-grabbing offensive plays. Nonetheless, his contribution to his team’s performance was critical in ensuring their success.

Williams has always had a way with words and he has a studious approach to life that has worked well for him and his family.

He is focused on extracting the maximum potential from everyone around him and leads by example.

Here are our favorite quotes from Aeneas Williams:

Aeneas took his parent’s advice to heart, concentrating on getting a good education while still playing the game that he loved so much.

Once he had a stable educational base, Williams was free to follow his NFL dream and make a huge financial success of his life as well.

1. Enjoy The Present, The Future Will Mold Itself

Aeneas believes that if you focus on the end goal only, you will miss out on the present. If you reach that end goal while forgetting the past, you will come out empty.

2. Don’t Try To Reach Your Goal Out Of Spite

Aeneas always did what he set his mind to even though his parents wanted a different future for him. He never let it affect his life but rather worked towards what he loved while honoring his parents’ wishes.

Be like Aeneas and follow your heart, so that no matter what you want, you can achieve it by working hard while still being true to your dreams.

Aeneas followed his love for football and found a second career as a pastor.

Despite not having the advantage of a scholarship, he still managed to achieve an excellent education and become a walking NFL legend.

Merging his religion and football career, he has been able to incorporate the NFL approach into his church work as well.

Since his retirement, Aeneas has spent his time building his church, looking after his business interests, and spending quality time with his family in St. Louis.

As of December 2022, Aeneas Williams’ net worth is estimated to be $50 Million.

What do you think about Aeneas Williams’ net worth? Leave a comment below.

What is Faze Swagg's net worth?  Introduction  Faze Swagg is a...