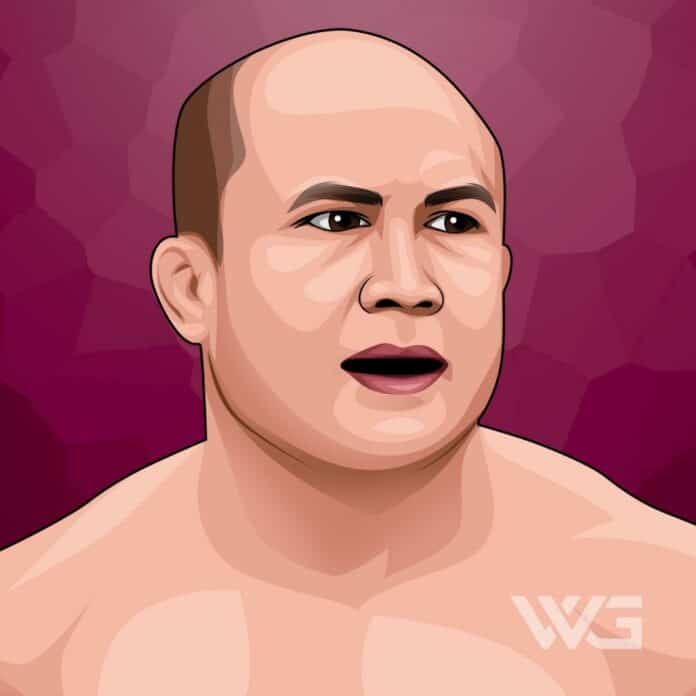 What is BJ Penn’s net worth?

B.J. Penn is an American mixed martial artist who won a UFC championship in both the lightweight and welterweight divisions.

Penn retired in 2019 but has been a prominent figure in mixed martial arts and attempted to start a political career.

Jay Dee Penn III was born December 13, 1978 in Kailua, Hawaii and spent most of his childhood living in the state.

When he was a teenager, Penn began training in Brazilian jiu-jitsu and moved to San Jose, California and trained under the legendary Ralph Gracie.

Penn participated in the World Jiu-Jitsu Championship where he won multiple medals in the late 1990s and was able to showcase his skills to the right people like Dana White and the UFC.

He signed with Ultimate Fighting Championship and made the jump to mixed martial arts, and by 2001 was ready to compete against the best.

BJ Penn won his first UFC match against Joey Gilbert via technical knockout and won his first three overall matches before dropping a decision to Jens Pulver in 2002.

Penn wouldn’t lose for another two years, becoming the UFC Welterweight Champion during that time with wins over that time with a win over Matt Hughes at UFC 46.

He would run into a rough patch during the mid 2000s, losing three out of four matches, including defeats from Lyoto Machida, Georges St. Pierre, and Matt Hughes.

Over the next five years, Penn would improve his record to 16-7-1, but his final win came against Hughes in 2010 before finishing his pro career with a draw and seven losses.

Penn would end up retiring after losses to the likes of Frankie Edgar, Ryan Hall, and Clay Guida, finishing with a record of 16-14-2 and having won multiple UFC titles.

BJ Penn was among the highest-paid MMA fighters of his time, routinely making six figures for much of his career.

In his first few UFC matches, most of what Penn was making came from win bonuses, with his first $100,000 match coming in 2007 against Jens Pulver.

At his peak, Penn was making over $300,000 per match, including his wins over Kenny Florian and Matt Hughes.

That put Penn alongside the likes of Chuck Liddell and Tito Ortiz in terms of highest-paid mixed martial artists.

Some of Penn’s other notable payouts included his $225,000 salary against Nick Diaz and $250,000 for beating Diego Sanchez.

The final four fights of Penn’s career earned him $170,000 each, though all four would result in losses to the likes of Clay Guida and Ryan Hall.

Overall, Penn made just over $3.3 million from fight payouts, and with his business ventures and endorsements taken into consideration, he’s worth an estimated $22 million.

BJ Penn was raised in Hawaii alongside his three siblings by his parents Loraine Shin and Jay Dee Penn.

Though Penn has never been married, he was in a long-term relationship with Shealen Uaiwa that lasted for over a decade.

While together, Penn and Uaiwa had two daughters named Aeva Lili’u and Kulia, though his relationship with his ex-girlfriend and daughters has been described as strange.

No matter where he has gone, BJ Penn hasn’t had any trouble winning awards at a rate higher than just about anybody else.

Whether it’s Brazilian jiu-jitsu or his time in UFC, publications have selected Penn for a slew of awards.

Here are some of BJ Penn’s top awards and achievements from his career:

Penn’s fighting career may have come to an end, but his trophy case is one of the largest in the history of mixed martial arts.

He will go down as one of the greatest fighters of his time, and the long list of awards is proof of his stay at the sport’s pinnacle.

How Does BJ Penn Spend His Money?

BJ Penn is one of the richest MMA fighters in the world, which has allowed him to afford some of the finer things in life.

Penn spends his money on some of the most expensive cars in the world, including owning an Aston Martin and a Bentley.

Though not among the most expensive houses in the world, Penn does have a beautiful home overlooking Hilo Bay in Hawaii that’s estimated to be over $1 millio.

When the Hilo Lanes bowling alley closed down, Penn was able to place a commercial gym in the property after it sold for $2.55 million.

BJ Penn is one of the more versatile mixed martial artists in the world having made the jump from the Brazilian jiu-jitsu to the Ultimate Fighting Championship.

Along the way, there have been some peak moments in Penn’s career that add to his legacy as one of the greatest fighters of all time.

Here are some of the best highlights of BJ Penn’s career:

Penn is now retired from fighting, but looks to stick around MMA and become a figurehead for the sport.

He’s also hoping that his political career takes off, adding to his long list of highlights throughout his life.

BJ Penn is certainly one of the most interesting mixed martial artists in the world and has a lot of opinions to share.

Throughout his career and in the years that have followed, Penn has provided a lot of memorable lines when Joe Rogan gets a microphone in front of him.

Here are our favorite quotes from BJ Penn:

BJ Penn saw his Hall of Fame career start almost completely by chance when he was discovered at the World Jiu Jitsu Championship.

Since then, Penn has become one of the most famous and richest fighters in UFC history, and the former professional mixed martial artist has a lot to teach in life.

Now that you know all about BJ Penn’s net worth, there are some takeaways to learn from the Brazilian jiu jitsu practitioner like Anderson Silva that became a welterweight division icon.

Here are some of the best success lessons to learn from BJ Penn:

BJ Penn found his true calling when he was growing up with Brazilian jiu-jitsu, and he used this passion to help him avoid trouble as a teenager.

Penn then became passionate about mixed martial arts, and set him down a path of fortune and fame with a job he truly enjoyed.

For Penn, it’s been difficult to stay in retirement because of how much he loves martial arts and says he wants to find another hobby to keep him busy.

BJ Penn has seen martial arts as a form of escape, and he’s now using his knowledge to pass along to future generations.

Penn is one of the most well known people in Hawaii and teaches mixed martial arts and Brazilian jiu-jitsu classes at his gym.

One trainer said that Penn is one of the best teachers, and that children listen attentively when Penn is talking about how to become better.

In mixed martial arts, the promotion is similar to that of professional wrestling with bad guys (heels) and scrappy underdogs (babyfaces).

Penn has been on both sides of the coin as he played the heel persona perfectly, and it earned him millions of dollars.

With people cheering for him to lose, Penn was at his best and became a big draw as people paid good money in hopes of witnessing him be defeated.

BJ Penn remains one of the biggest names in mixed martial arts despite being retired from the competition thanks to his contributions to the sport.

Penn is a Hall of Famer that carries a lot of weight in the UFC and with fans around the world to the point that he’s attempting to get into politics.

Some say that Penn should’ve retired sooner than he did, but he was able to make millions toward the end of his career to add to his impressive net worth.

What do you think about BJ Penn’s net worth? Leave a comment below.

What is Ben Hardy's net worth? Introduction  As of ,...