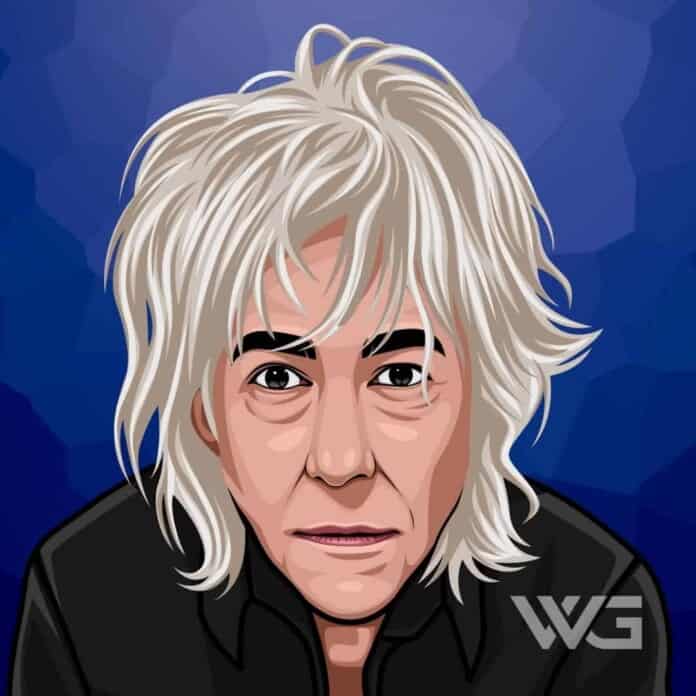 What is Bob Geldof’s net worth?

Bob Geldof is an Irish singer and songwriter.

Geldof rose to fame as the lead singer of the Irish rock band “The Boomtown Rats.” The band had the UK number one hits with his compositions ‘Rat Trap’ and ‘I Don’t Like Mondays.’

In 1982, he starred as “Pink” in Pink Floyd’s movie ‘Pink Floyd – The Wall.’ As a fundraiser, he organized the charity supergroup band Aid, and the concerts Live Aid and Live 8.

As of November 2022, Bob Geldof’s net worth is estimated to be roughly $150 Million.

Robert Frederick Zenon Geldof was born on the 5th of October, 1951, in Dún Laoghaire, Ireland. Geldof is the son of Robert and Evelyn Geldof. When he was 6 years old, his mother died at age 41 of a cerebral hemorrhage.

Geldof attended Blackrock College, where he was bullied. After working as a slaughterman, he was hired as a music journalist in Vancouver, Canada, and British Columbia for The Georgia Straight. He hosted the Canadian Broadcasting Corporation children’s program “Switchback.”

In 1975, Geldof returned to Ireland and became the lead singer of the Boomtown Rats. They released their first single in the UK in 1978 with ‘Rat Trap.’ They rose to fame with their second hit, ‘I Don’t Like Mondays.’ In 1980, the band dropped the album ‘Mondo Bongo.’

Geldof organized a group of pop musicians under Band-Aid to help starving children in Africa in 1984. The song ‘Do They Know It’s Christmas’ was released, and it debuted at the first spot and became the biggest selling single in the UK ever. The single sold over three million copies and raised more than $20 million for the people of Ethiopia.

One of the most monumental stage shows in history happened with Phil Collins joined Geldof on stage. Geldof shocked viewers into giving cash by mouthing profanities and slamming his fist on the table.

In 2005, Geldof announced the Live 8 project. The project was started to raise awareness of issues that burden Africa, including hunger and AIDS.

As of November 2022, Bob Geldof’s net worth is estimated to be roughly $150 Million.

How Does Bob Geldof Spend His Money?

Bob Geldof has lived in his home in Faversham for more than 30 years, and when it comes to charity, he has helped plenty of different organizations throughout the years.

Geldof owns a home in Faversham, England.  This home has been one of his homes for many years. He bought it from his friend Gibbs. In 2013, it was reported that he had lived there for 30 years.

Geldof’s first major charity involvement took place in 1981 when he performed for Amnesty International’s The Secret Policeman’s Other Ball. Since then, he has helped charities such as 21st Century Leaders, 46664, Aegis Trust, Amnesty International, Bottletop, Cinema For Peace, Elton John AIDS Foundation, and Estamos.

Here are some of the best highlights of Bob Geldof’s career:

“We’re looking at the singular condition of poverty. All the other individual problems spring from that condition… it doesn’t matter if it’s death, aid, trade, AIDS, famine, instability, governance, corruption, or war. All of that is poverty. Our problem is that everybody tries to heal each of the individual aspects of poverty, not poverty itself.” – Bob Geldof

“I’m getting a style. And I wanted to be all twinkly for this interview, so I went into Boots to get some stuff for styles, and they don’t make it anymore because the new thinking is, the style will go on its own! They said use Optrex, so I left immediately, and I went into Superdrug, and they said the same.” – Bob Geldof

“Someone said ‘Stop,’ so we had a break. And we went back afterward, somewhat ruefully, because we thought it was over, and something happened. Garry Roberts attacked his guitar, and we did Lookin’ After Number One. And we were ferocious.” – Bob Geldof

“Plane rides don’t help because you’re on your own. I travel with my mate, who’s my agent, and we play Scrabble, but in between choosing the words, you’re left there with it. So usually I try to write or read. Anything. But even then, it will assail you. And it is an assault.” – Bob Geldof

“I didn’t really understand why… I could understand with Paula because she’d been a figure on television and was very different from what was expected of a girl at that time. And didn’t give a toss, and was very bright and beautiful.” – Bob Geldof

Now that you know all about Bob Geldof’s net worth and how he achieved success; let’s take a look at some of the lessons we can learn from him:

Mankind, at its most desperate, is often at its best.

Divorce is a by-product of the fact that maybe the nuclear unit is gone.

How much is Bob Geldof worth?

Bob Geldof’s net worth is estimated to be $150 Million.

How old is Bob Geldof?

How tall is Bob Geldof?

Bob Geldof is an Irish musician and activist who became famous worldwide as the lead singer of the popular rock band The Boomtown Rats.

He then went on to have a solo singing career, and he founded many highly successful production companies.

As of November 2022, Bob Gelfod’s net worth is estimated to be roughly $150 Million.

What do you think about Bob Geldof’s net worth? Leave a comment below.