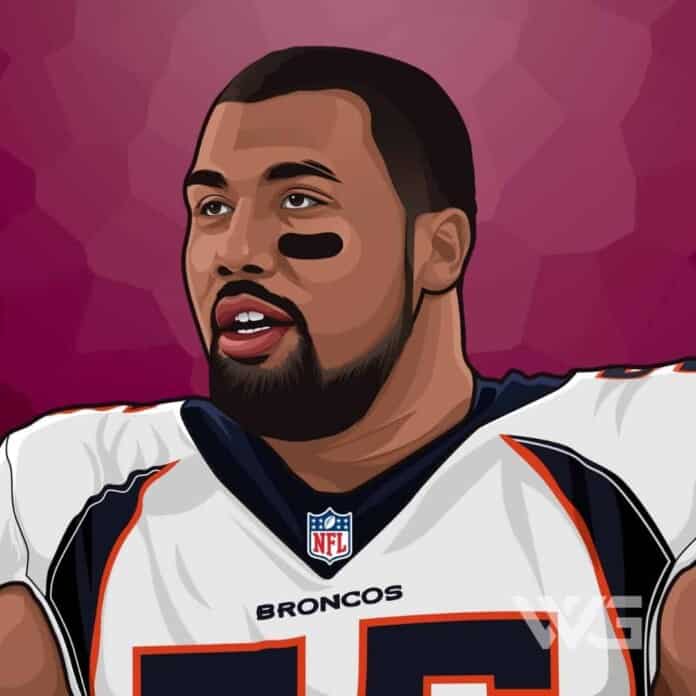 What is Bradley Chubb’s net worth?

Bradley Chubb is an American football outside linebacker for the Denver Broncos of the National Football League. Chubb played college football at North Carolina State University.

As of November 2022, Bradley Chubb’s net worth is approximately $13 Million.

Chubb was a hybrid linebacker-defensive end at Hillgrove High School, where he helped the Hawks advance to the Georgia 6A quarterfinals as a senior.

He officially committed to North Carolina State University in 2013. Chubb also had offers from Duke, West Virginia, Wake Forest, East Carolina, and others.

Chubb was projected to go in the first round of the 2018 NFL Draft.

Different projections have pegged him as going within the top five (as high as first to the Cleveland Browns) or to the Indianapolis Colts at the sixth pick.

He made his professional regular-season debut and the first career start in the Denver Broncos’ season-opener against the Seattle Seahawks and recorded three combined tackles and was credited with half a sack during a 27-24 victory.

Chubb started in all 16 games in 2018 and recorded 60 combined tackles (41 solos), 12 sacks, two forced fumbles, and one pass deflection. He received an overall grade of 68.9 from Pro Football Focus, which ranked 48th among all qualifying edge rushers in 2018.

During Week 4 against the Jacksonville Jaguars, Chubb recorded his first sack of the season on Gardner Minshew II in the 26-24 loss.

Here are some of the best highlights of Bradley Chubb’s career:

“I am a hard-playing defensive end with a high motor, relentless in the pass rush, stout against the run.” – Bradley Chubb

“There is no inspiration, I’m just having fun playing a sport I love. I do the same things at practice every day and I’ve always done those things during games, the camera is just on me more now.” – Bradley Chubb

“Because I’m handsome and everybody needs someone handsome to pick up the team’s morale. Also, they will get 100% from me EVERY day and someone who loves the game of football – every aspect of it, not just the games and the glory.” – Bradley Chubb

“My grade was a 2nd to 3rd round pick. They wanted to see me pass rush better and I feel like I’ve done that.” – Bradley Chubb

Now that you know all about Bradley Chubb’s net worth, and how he achieved success; let’s take a look at some of the lessons we can learn from him:

Nothing is going to work if you continue to wish it will work. The only way things work out is by making them happen through hard work and perseverance. Work is not supposed to be easy; if it were then everyone could be successful.

2. Your Mindset Is Everything

Anything is possible in this world with hard work and a mindset of achieving anything.

3. Do The Right Work

People will wish and complain about what they don’t have but won’t put in the work to get it.

How much is Bradley Chubb worth?

Bradley Chubb’s net worth is estimated to be $13 Million.

How old is Bradley Chubb?

How tall is Bradley Chubb?

Bradley Chubb is a multipurpose player and features both an outside linebacker as well as a defensive end for the Broncos. During his college years, he won the Bronko Nagurski Trophy and Ted Hendricks Award.

As of November 2022, Bradley Chubb’s net worth is estimated to be roughly $13 Million.

What do you think about Bradley Chubb’s net worth? Leave a comment below.