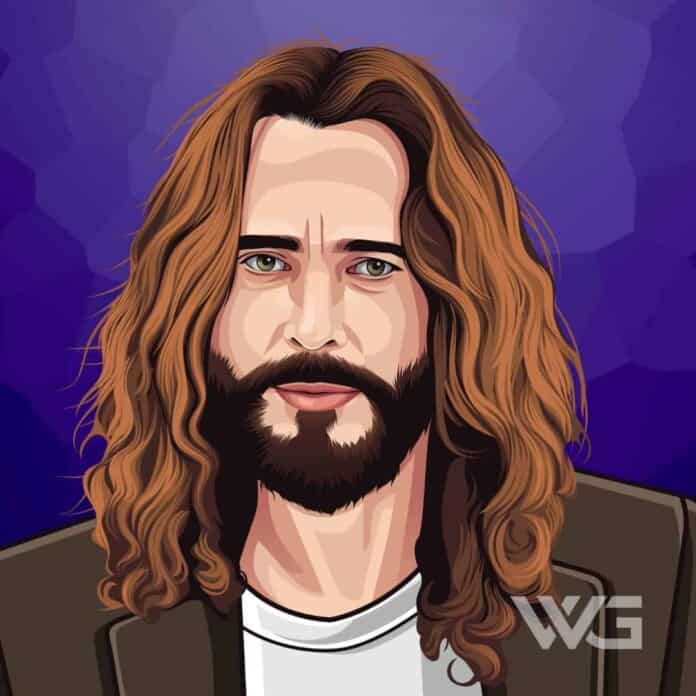 What was Chris Cornell’s net worth?

At the time of his passing, Chris Cornell’s net worth was roughly $40 Million.

Christopher John Boyle was an American singer, songwriter, and musician from Seattle.

He was best known as the lead vocalist for the rock bands Soundgarden and Audioslave. Cornell got recognized when Soundgarden was formed in 1984.

Chris Cornell was born in Seattle Washington on the 20th of July, 1964.

Cornell grew up in an Irish-Catholic background. His parents divorced when he was a teenager, he had two brothers and three sisters.

He attended to Christ the King Catholic elementary school, where he had his first debut performance in front of a crowd. He later attended Shorewood High School where he started to get more into his music career.

Cornell’s career began when he was a member in the band The Shemps. Soundgarden was formed in 1984, and four years later he formed Temple of The Dog as a tribute to his friend. The band released an album the following year.

Soundgarden’s final album Down on the Upside did not do well commercially. Cornell decided to start his solo career and dropped his debut album in 1999 with an album entitled Euphoria Morning.

In 2001 he joined with three other musical pioneers to form Audioslave. Audioslave’s second album Out of Exile debuted at the top of the Billboard 200 chart.

He released two solo albums within two years and he toured in South and North America, Europe, and another 21 nations. In 2011 Cornell released The Keeper which was an original song for the film Machine Gun Preacher. The song was exclusively a part of the campaign for children’s charity in Africa.

Cornell released an acoustic live album Songbook in 2011 which was his debut live album as a solo artist. He went on tour around in North America and later continued his tour in 2012-2013 and performed in several venues in Europe and in the U.S.

He released his last single before his death The Promise which was released in 2017. Cornell was an outstanding rock icon.

From 1990-2011 he was nominated several times for the Grammy Awards which gained him an incredible net worth. His music will remain as one of the best rock music of all time.

Here are some of the best highlights of Chris Cornell’s career:

Awards and Nominations of Chris Cornell

“If I’m going to go out to be a solo artist, it’s because I want to do something different without having to wait on someone else’s schedule or hobbies or be limited by other people’s prejudices. I’d be kind of stupid not to exercise that.” – Chris Cornell

“I don’t care what people think of me or for what reason they think of me. I don’t feel like I don’t know who I am to the degree that I have to change my hair to create a new me.” – Chris Cornell

Chris Cornell helped influence musicians and generations all over the world. He showed the world that everything is possible if you’re willing to fight for it.

He was one of the most successful lead singers in a metal band, and he has inspired many including likes of Dave Navarro, Elton John, Billy Idol.

At the time of his passing, Chris Cornell’s net worth was roughly $40 Million.

What do you think about Chris Cornell’s net worth? Leave a comment below.